Shergazi-Khan Madrasa, built by the hands of slaves, stands as a fascinating monument of the 18th century. One of the oldest buildings in Ichan-Kala — an ancient walled town — the madrasa is located in the very heart of modern Khiva. The story of this site is that of power, revolt, and murder.

Khan Shergazi ordered the madrasa to be built, but had no inkling it would ultimately lead to his demise. Although the overall architectural achievements of the site have been surpassed and faded into history, the history here is no less vibrant today.

Shergazi Khan was born in Bukhara, although the exact date of his birth is unknown. It was here that he studied in the madrasa and quickly became known as a well-educated person. In 1714, after the death of Yadigar Khan, Shergazi Khan ascended the throne to become the ruler of the Khiva Khanate. Research suggests he was the last powerful and influential ruler in the history of Khiva. In 1717, Shergazi Khan used cunning military strategy to defeat the first expedition of the Russian Army into Central Asia. According to some sources, surviving soldiers were captured and made slaves. A similar fate befell soldiers from Khorasan, Mashhad, and Merv, cities Shergazi Khan’s army captured the next year — survivors were taken to Khiva as prisoners and forced in slave labor.

Construction on the Shergazi Khan Madrasa began in 1719 with the site opposite Pahlavan Makmud’s mausoleum having been chosen as the ideal location. The slaves were promised release back to their homelands once the work was completed. When construction was coming to an end about a year later, however, Shergazi Khan began inventing new tasks to delay the construction any way possible. The delays lasted for several years. According to legend, when the khan came for an inspection, the slaves, who were angry with his false promises, killed him. There is some truth to the legends: Shergazi Khan was indeed killed by slaves in the madrasa in 1728 and buried in the mausoleum to the right it. The madrasa bearing his name had been finished in 1726, however, so some discrepancies do exist in this tale. The fate of the slaves is unknown, but in 1740 the Persian ruler Nadir Shah seized Khiva and freed Russian prisoners of war and probably all of the slaves from Khorasan along with them. 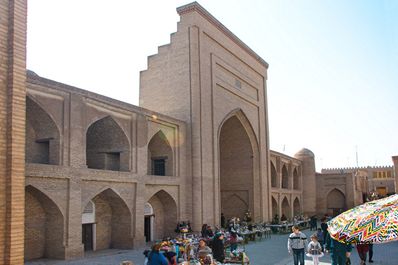 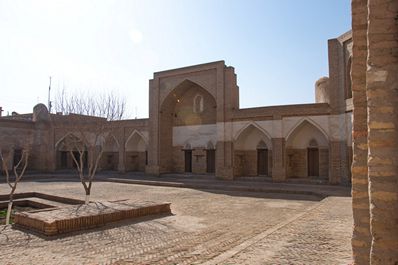 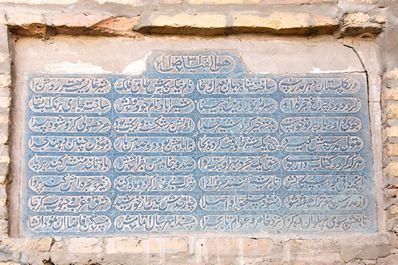 Shergazi Khan Madrasa is a rectangular one-story building with two floors on only the front side. Inside there is a large courtyard surrounded by 55 hujras (cells) and a lecture hall. The building was of poor quality, either because of the desire of the slaves to quickly free themselves or the constant input of Shergazi Khan. For several centuries, the ground beneath the building subsided heavily, and throughout its history, the madrasa has been restored several times. The last and largest-scale restoration was carried out in the 20th century, as the building was in dire condition.

Although the legends surrounding the construction of the Shergazi Khan Madrasah might have meant an inauspicious start, its continued existence saw a progressive brand of education. The madrasa even received the popular name Maskani Phasilan, which translates to “the abode of knowledge”. Many residents of the Khiva Khanate and neighboring countries received education here. Among the famous students of the madrasa were the Uzbek poet and historian Pakhlavankuli Ravnak, the Karakalpak poet Azhiniyaz Kasybayuly, the Turkmen poet and philosopher Makhtumkuli.

The Shergazi Khan Madrasah is no longer operational, the cells are empty, and many souvenir shops are located in front of its entrance. However, the history of this inconspicuous building in the heart of Ichan-Kala is fascinating and recalls the turbulent life of the slave-owning Khiva Khanate of the 18th century.