In the first half of the nineteenth century the palace Tash-Khovli (stone country-estate) was built in the eastern part of the inner city. This complex of a building with three yards has rectangular plan, in the southern part are the receiving yard, Arz-Khovli, and a yard for entertainment, Ishrat-Khovli. The northern part is occupied by a harem. Labyrinths of corridors join the yards and buildings. The brothers and relatives of the khan lived in the palace. The two gates face the west and south. All the constructions were built from the high quality bricks. The fencing walls of the palace end up with figured cogs. From the flatness of the wall, the high well-portioned towers stand out.

Arz-khovli and Ishrat-Khovli have an identical plan. Around the southern part of the square yards, high single-pillar aivans are built with main houses behind them. On the other sides are the rooms for guests with small aivans on the second floor. Five excellent aivans come one after another in the harern. They are open to meet the northern winds. Two rooms were built behind the aivans through a main majolica entrance with a painted ceiling. They are simply decorated dwellings. 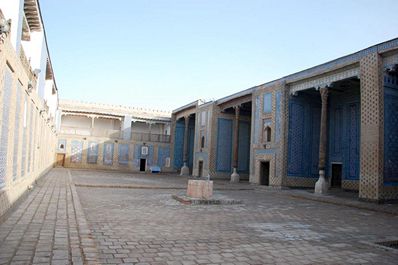 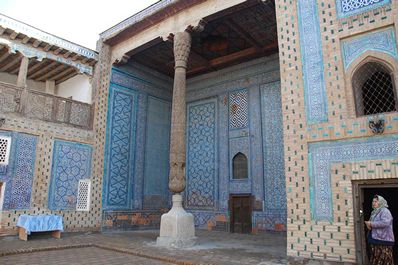 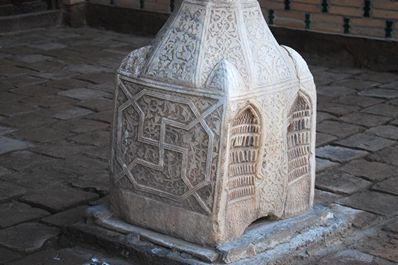 All the elements of architecture are efficient and elegant. Outside facades are not faced, but the walls of the yards are separated into separate panels and decorated with majolica of a carpet pattern. The high aivans have retained their decorative design. The decorative pendant ceilings were installed. Geometrical and plant decorations on the carved marble bases and wooden pillars, and majolica slabs are replete with epigraphic narratives about the history of Khiva khans. The railings on the second floor represent a set of fences (panjar-as). The decorated ceilings are of a golden-red color. The facing of the interiors is rather simple. Blooming trees in restrained black and blue colors are represented picturesquely on the walls.

The Tash-Khovli yard is famous for its thoughtful design. Contrasting of open and closed structures and the creative use of light and shade has drawn special comment. The original synthesis of architecture and monumental decorative art in the creative work of the Khorezm masters are vividly represented by this palace.

Trade has flourished at the gates of Pahla-van-darvaza throughout the ages. Small street-stalls selling food have always been there, in the 1830s, by Alla-Kuli-khan's order, a caravanserai was built nearby, and goods were brought here by caravans from many countries.

The planning of the caravanserai is simple and comfortable. It is a symmetrical rectangular building with a yard, on the perimeter of which there are two-story vaulted rooms. Traditionally a portal separates the exit and level of the yard is lowered in the center, which was comfortable for unloading of beasts of burden. Merchants stayed here and goods were kept and traded here.

Close to the main facade, oriented to the south, a covered bazaar (tim) was built; now the tim and caravanserai constitute one area. The covered bazaar is a multi-cupola composition stretching along a west-east axis. There is a hall in the center leading to the caravanserai. The trading is conducted on the side stalls. In earlier centuries one could buy goods brought from China, England and Bukhara Khanate.