Sher-Dor Madrasah: the history of construction

Sher-Dor Madrasah was built on the Registan Square, Samarkand in 1619-1636. The name is translated as “Madrassah with Lions”. It is the distorted and exaggerated reflection of the Ulugbek Madrasah, which is located just opposite, on the western side of the Registan Square. The difference in age between them is 200 years. Sher-Dor has larger area and sizes, but it yields to its “elder brother” by the quality of finishing works.

On the outside and inside this Madrasah is decorated with bright ornaments of glazed brick, walls and towers are covered with majolica of various patterns of climber flowers and quotations from Kuran on Arabic. But some part of finishing is irretrievably lost, though scientists, historians and restorers try to recover the initial appearance of Sher-Dor Madrasah. 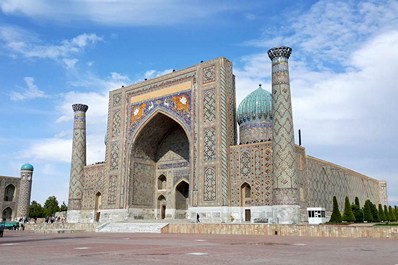 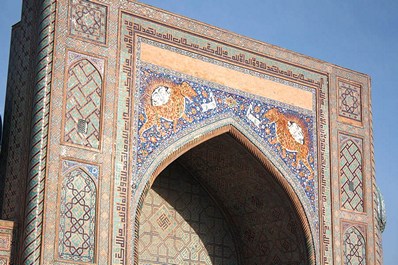 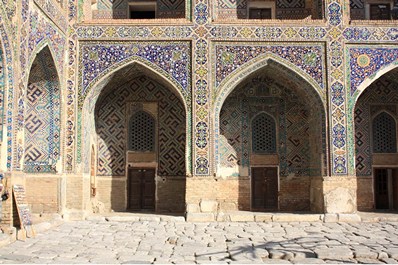 By architecture the Sher-Dor Madrasah almost repeats the Ulugbek Madrasah, i.e. it is the square building with inner yard, khudjras (cells) for students and two rooms for classes. The Madrasah was considered as the modern building of that time, because the latest architectural innovations were used at the construction. Moreover such grand building has a set of constructive peculiarities, which make it one of the best architectural monuments in Samarkand.

In addition the Madrasah of Sher-Dor has some features. In the center of the arch above the entrance there is the image of swastika, which from ancient times was the symbol of abundance and fertility. Also there are images of tigers with the sun on their backs on each side of the arch.

For the whole period of existence the Madrasah of Sher-Dor has been restored many times. The largest works were conducted in the beginning of XX century by Soviet architect, out of them the most famous was V.G. Shukhov. Today this monument of Samarkand architecture is one of the main sights of the city. In 2001 the Madrasah of Sher-Dor entered the UNESCO World Heritage List. 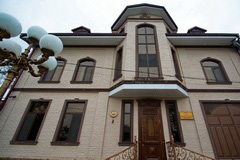 The cozy hotel in 15 minutes drive from the Samarkand airport