Tours, Attractions and Things To Do in Sarmish-say

The Sarmysh-say tract, located on the southern slopes of Karatau, 45 km north-east of the Navoi city, is one of the most famous places in Central Asia with petroglyphs. Karatau is one of the spurs of the Nurata mountains. There is the valley of Zarafshan to the south of the ridge. Sarmysh-say nature is diverse, there grow different kinds of trees, and slopes are covered with dense thickets of shrubs. The valley is a striking sight in spring: tulips, poppies grow everywhere, there are vast expanses of greenery around. 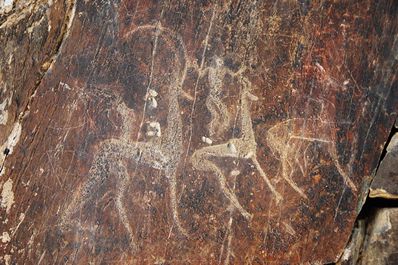 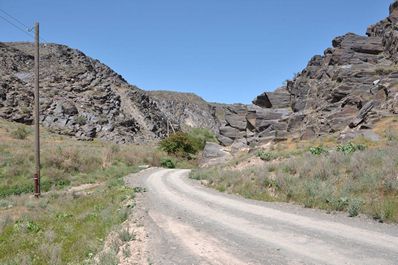 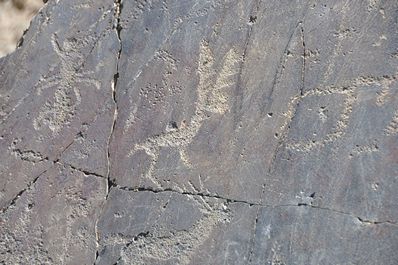 The nearest way to the petroglyphs of the Sarmish-say lays through the Sarmish Children’s Health camp. The territory of the camp is around 1,5 km. If tour to the petroglyphs is organized in the summer, the season when the camp is full of children, the territory of it have to be crossed by foot. At any other season of the year, it can be passed by car. After the camp, you should cover a distance of another 2 km till the point of destination.

Unfortunatelly, this territory is lack of good roads. However, after overcoming all the way, you will appear in the picturesque gorge of the Sarmysh river, where you will find the unique archaeological monuments of the Stone, Bronze, Early Iron and Middle Age periods of history.

The size of the territory of really huge - 20 square kilometers. Together they form a unique cultural and historical complex of historical monuments of the ancient world and medieval times.

By today, over 10,000 petroglyphs were discovered in Sarmysh-say. It is a very large and varied collection of rock art. Most of the petroglyphs are located in the middle reaches of the say (the river). There are burial mounds and sacred places near petroglyphs. 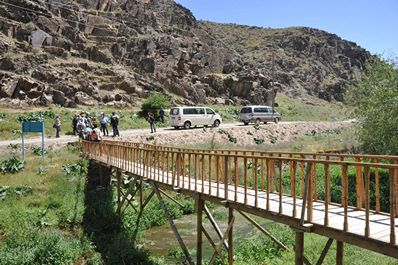 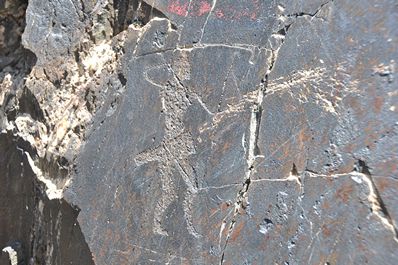 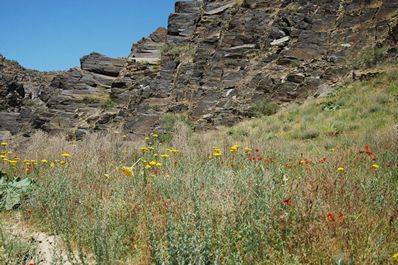 Scientists - archaeologists of the Archaeological Institute under the Academy of Science of the Republic of Uzbekistan not exclude the possibility that the territory Sarmysh-say was inhabited as early as in the Paleolithic era (300-15 thousand years BC). In the Neolithic period (6th – 5th centuries BC) tribes of hunters and fishers of Keltaminar culture settled here. The convenient location of the tract, the availability of fresh water and a large number of animals turned Sarmysh-say into a convenient place for the performance of rituals. According to the archeologists it was a place for religious ceremonies.

The age determination of Sarmysh-say petroglyphs is a problematic task. One should carefully study the plot, style, technique of application images as well as desert tan, overlapping pictures and much more to give at least an approximate date. As the process of creating rock art and the process of their investigation - a very difficult and time consuming task.

Sarmysh-say petroglyphs vary in age, style and plot. Here is a picture of uruses, which are referred to the Stone and Bronze Ages, images of deers, goats in the animal style typical for the Scythian tribes of art circle (early Iron IX-II cent. BC). Also in Sarmysh-say petroglyphs can be found later period relating to the Middle Ages. They depict medieval domestic goats, camels, dogs, and just as easily dated Arabic inscription. 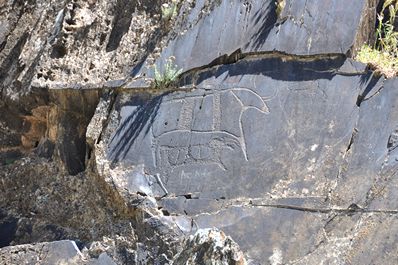 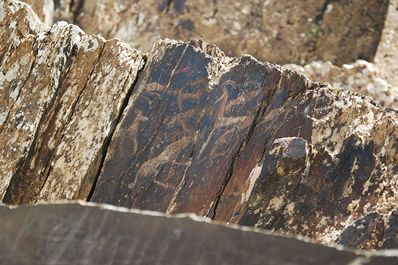 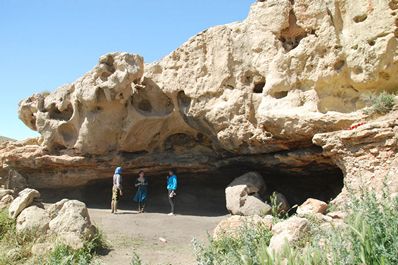 Petroglyphs of the Stone and Bronze Ages (7th -2nd ) millennium BC are the most ancient images in Sarmysh-say. These are mainly rock carvings of uruses. Similar figures were discovered on the territory of Azerbaijan and the Arabian Peninsula. The size of the images varied from 30-40 cm to 70-80 cm. Many of these ancient rock carvings are similar in technique, so that it can be assumed that they were made by one master.

Petroglyphs of the early Iron Age are distinguished with "animal" style typical for the nomadic tribes of the Scythians. Basically, they depict deer, wild rams, horses, camels. There are no rock carvings of the uruses, but there are typical for nomads images of a bow and arrows, as well as horsemen and hunting scenes. In contrast to the more ancient rock carvings, Saka-Scythian period rock carvings are smaller. In addition, they were made by different artists, but the masters very carefully and with big precise transferred the images of animals and humans.

Petroglyphs of the later period are lighter and coarser. The rock carvings technique is quite simple, but the content shows no variety typical for the ancient historical periods. Basically they depict pets. There are also Arabic inscriptions, mixed with ancient images. One can also see horsemen, with whip in hand. Unlike Saks rock carvings, medieval petroglyphs get sketchy. No precision and elegance in design.