Kampyr-Tepe (Alexandria of Oxia) near Termez

Kampyr-Tepe is one of the oldest archaeological sites in the territory of Uzbekistan. It is ruins of the port city located on the Amu Darya River (Oxus in ancient times), founded at the end of the IV century BC and existed until the beginning of the first century BC. Kampyr-Tepe is situated 30 kilometers northwest of Termez, on the right bank of the Amu Darya River. The settlement was founded to operate the Burdaguy ferry and serve as a hotel and customs. There was a terminal for traders, taking the route of the Silk Road, where they could rest, dispatch their goods, pray to the gods and continue their way.

In 2019, Edward Rteveladze, a historian of Central Asia, concluded based on his extensive research that the historical site of Kampyrtepa is what was known as the Alexandria of Oxia, the port city founded by Alexander the Great on the Amu Darya river. Though the city is mentioned in numerous ancient texts, it's location had remained a mystery for centuries.

The Kampyr-Tepe complex consists of a main citadel, surrounded by a moat, “downtown”, walled by a rampart with towers, and unfortified suburb. There, the archaeologists found well-preserved cultural layers of early Hellenistic, Greco-Bactrian and Kushan-Uezhian eras. The numerous finds as well as architectural features of the ancient site suggest the coexistence of various cults and religions in Kampyr-Tepe for centuries. Zoroastrians, Buddhists, idolaters of the ancient Greek gods, and followers of local cults lived together in peace there. 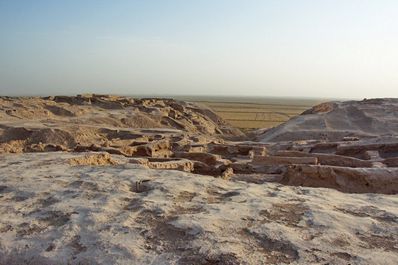 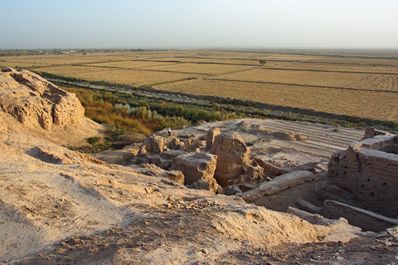 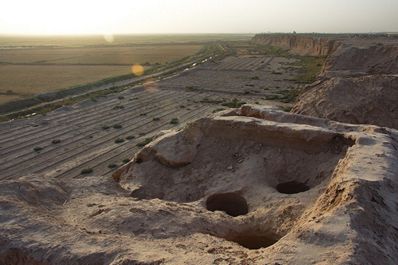 The city reached heights in its development in the reign of Kanishka I (the first third of the II century AD). This era was characterized by the most favorable conditions for the development of international trade and culture. The archaeological findings, related particularly to the Kushan period, were most numerous. Thus, a Buddhist sanctuary, built outside of the vallum, as a tribute to a Greco-Bactrian tradition, was found there. At the same time, the architecture of the sanctuary belongs to the Zoroastrian era and represents a cella, encircled with a corridor. A terracotta figure of seated Buddha, found in its base, embodies simultaneously the features of Buddha and Ahura Mazda, the deities of Zoroastrianism and Buddhism, the religions, ruling at the time.

Coins of different eras and ancient Bactrian papyri were also found there. It is an interesting fact, that in the reign of Kanishka I, the coins were stamped with images, besides Buddha’s, of deities of more than 30 different religions, confirming once more the era of co-existence and religious tolerance, prevailing at the time, originally laid in the philosophy of Buddhism.

Kampyr-Tepe is one of the iconic landmarks of Surkhandarya oasis.