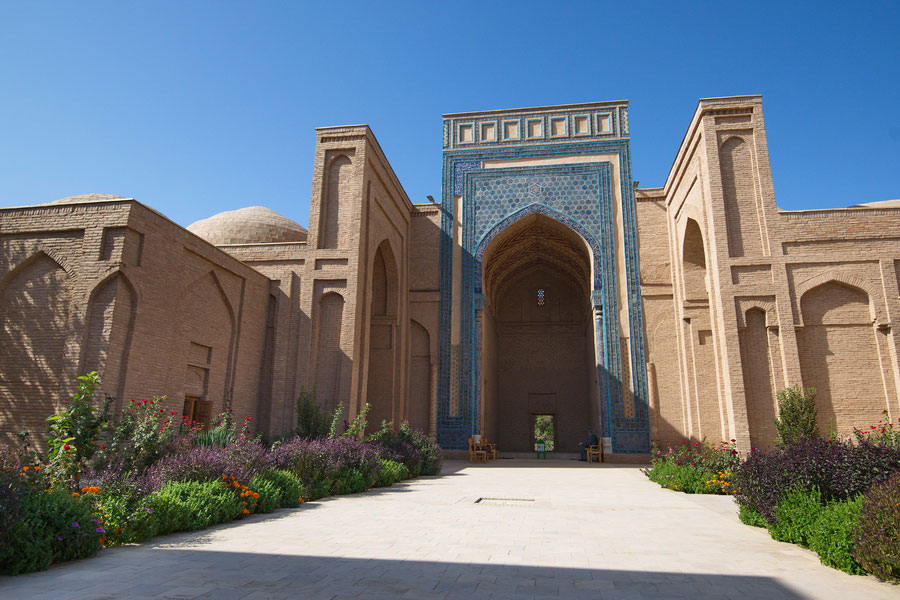 The cult-memorial complex of Sultan Saodat was developed during the period of XI-XVII c. at the graves of the Termez sayyids. It had a number of cult structures added at different times: mausoleums, mosques and hanagoh, built on the perimeter of an elongated courtyard with a combination of integral and short compositions.

The most ancient part was a three-part frontal opening the southwest part of the complex to the courtyard side. Here are located two large one- chambered, square-domed mausoleums. They arc joined with an aperture terrace with a mihrab placed between them, which was used as a funeral prayer niosque. Researchers have dated this ancient group to the XI-XII c. (52) or the middle of XI c.

Due to their clear-cut solutions to the problems of structure, decor and volume, the mausoleums gained strict, highly artistic architectural appearance. The unity of the construction is accented by decorative baked brick, carefully clad on the surface of the wall in the form of plain "ribbon" "fir tree" and "belt" patterns. The wall of the mausoleum had an octahedron tier of arched sails on which was set a large dome. The burial vaults with their eastern facades were contiguous to the courtyard and had the same decoration. 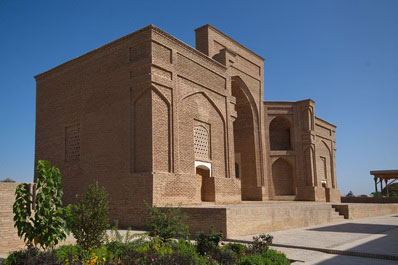 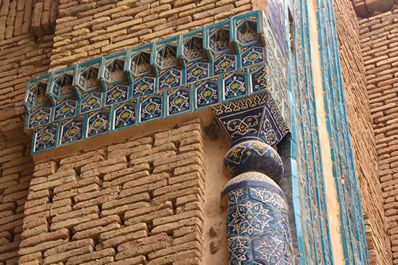 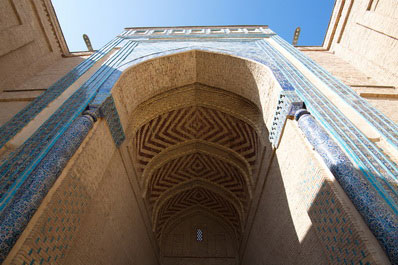 Each facade was decorated with three flat arched bays in rectangle frames. The architrave, which was decorated with carved details, strengthened to three-quarter columns. They were set up on highly original bases, where at the expense of cutting angles of the prism of the bases of the facade part there appeared the effect of a cube fixed up on the rib. We should note that this.-unusual type of diamond-shaped base was used at the beginning of the XV c. in the interior of the hanaqoh complex of Hakim at-Termizi. This method, which we observed only in Termez, was one of the peculiarities of its architecture. The upper part of the arched bay to level five was clad in the form of "fir tree".

The northern mausoleum with 10m sides in the interior was decorated richer than the southern one. Here, all four walls had the same decoration of arrow shaped bays in a rectangle panel. These arches were set on three-quarter cylindrical columns deco rated with a line of carved rhombus, rings etc. The bosom of the sails are in the form of a spherical half-dome, upper bay rose to the fifth level of arches, and the arched bays located under the dome over angles of octahedral tiers over-clad in the form of a fir tree, which are intensified on the background of wall cladding.

The southern mausoleum with its 9m. side had a stair built in its thick western wall leading to the roof of a terrace joined to it. Within the period of XIV-XV c. the portal of the terrace was built on the height and faced with multi-colored glazed decoration (which has been lost).

In the XV c., to the eastern facade of the mausoleum there was built a one-chambered square room with about 6m. side. Further, the composition of the ensemble was developed along the line of the west-east wall by the erection of new construction on the elongated sides of the courtyard. Almost all of them repeated the idea of the ancient group of the build-versions, that is to say, three-stage with an open terrace in the centre of the opened frontal facade. These were groups of mausoleums built in different sizes and at a different time from the north and south sides of the corner yard in the XVI-XVII c. From the west part of the courtyard there was a portal entrance.

The magnificent ensemble was distinguished for its ancient group of mausoleums, homogenous in composition and decor though built in different style.