The Great Silk Road is the name of an ancient transcontinental trunk, once integrated the East and the West. Few people know that owing to the Great Silk Road the western world got to know about China, one of the most mysterious countries of antiquity. It was the road by which silk and other goods, unknown in Europe before, began being exported to the Western countries in the II century BC.

Over several centuries the Silk Road had been forming from small caravan roads, connecting different cities in the territory of China and Central Asia, which, in course of time, developed into a whole trade caravan road with its branches, leading to different states of the East and West. 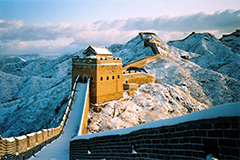 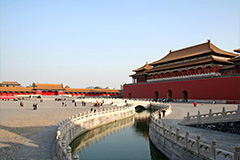 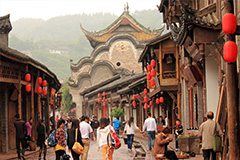 The history of silk and the history of the Great Silk Road are inseparably associated with China. According to an ancient Chinese legend the first person to unweave a silk cocoon in 2640 BC was the Chinese princess Hsi-Ling-Shih. The Chinese, indeed, did not lay the Great Silk Road intentionally. In 138 BC, the Emperor Wu of Han (Wudi) sent his officer by name Zhang Qian with a diplomatic mission to the West. Zhang Qian made a complete mess of the mission, because he was taken prisoner by the Huns, but then, upon the escape he travelled much along a caravan road and discovered a lot of new countries. When he returned home, the Emperor forgave his unlucky servant and sent him again with a mission to establish economic and trade relations with the western countries’ rulers. It was the beginning of the Great Silk Road heyday.

The Great Silk Road had been functioning up to the XVI century, and over its whole history was invested with an air of mysteriousness, romantic adventures and danger. The caravan ways were used to carry not only “precious” silk, whose secret the whole China from common craftsmen to the Emperor himself were thoroughly protecting for three millennia, but also gemmary from Badakhshan, as well as jadeite and greenstone from Hotan and Yarkand (Xinjiang) which, yet more, stirred up the interests of the Europeans to Mysterious China. 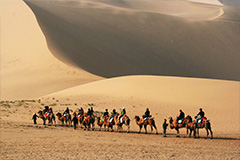 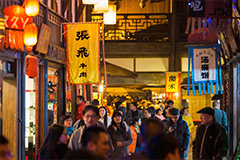 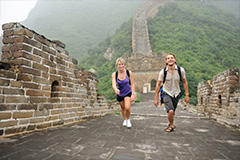 One of the largest Silk Road sections, the most remote from civilization, passed through the territory of modern China. The Silk Road started from the ancient Chinese capital - Chang’ an (modern Xian), then ran through the modern province of Gansu to Dunhuang city, where the Great Silk Road was divided into Northern and Southern roads. Actually the Road was just long passages running through deserts and steppes from one Chinese city to another one.

The caravan road in the Lanzhou - Dunhuang section borders with the Gobi Desert and this part of the road was considered one of most dangerous due to the frequent raids carried out by the nomads from the North. The only protection for trade caravans was the Great Wall of China erected along this section of the road.

From Dunhuang through Kamul, Turpan and Urumqi there ran the Northern Road mainly used to transport silk and other goods from Central China. In its turn the Southern road stretched through Cherchen, Hotan, Yarkand and Kashgar cities. Jadeite, greenstone and other precious stones, extracted in the Tian Shan Mountains were mainly transported by this road. 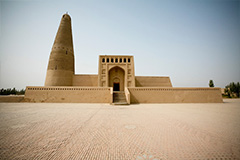 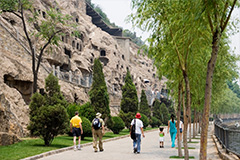 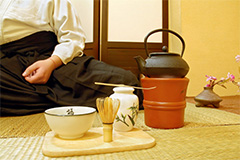 The Great Silk Road was not only a road from the East to the West. This was the way, such novelties as cotton, dates, cucumber, various melon and gourds, and citrus cultures, china and ivory were brought by. The Great Silk Road was also a connecting link to exchange ideas and cultures. This was the road to bring paper and gunpowder from China to the West. This was the road Marco Polo made a voyage by, discovering mysterious China to the Europeans.

The Great Silk Road was not just a road. In the antiquity and Middle Ages the Great Silk Road acted not only as a transcontinental trade trunk, but it was the way the Buddhist monks were moving by, disseminating their teaching about the world. Thereby Buddhism came from India to China and Central Asia. The Great Silk Road was used by Atilla and Genghis Khan to lead their armies. It was also a channel to disseminate scientific knowledge and cultural values.

Up to date there exist numerous restoration projects for the Silk Road. Some of their participants are taking trips by these tourist routes even now. Besides, on UNESCO’s initiative, some caravanserais which were functioning in the Middle Ages are currently being renovated. Essentials prerequisites for safe and comfort trips by the ancient caravan roads are being provided. In spite of the fact that the Great Silk Road has lost its main significance, it is still, like thousand years ago, something like a bridge connecting the peoples of Eurasia.