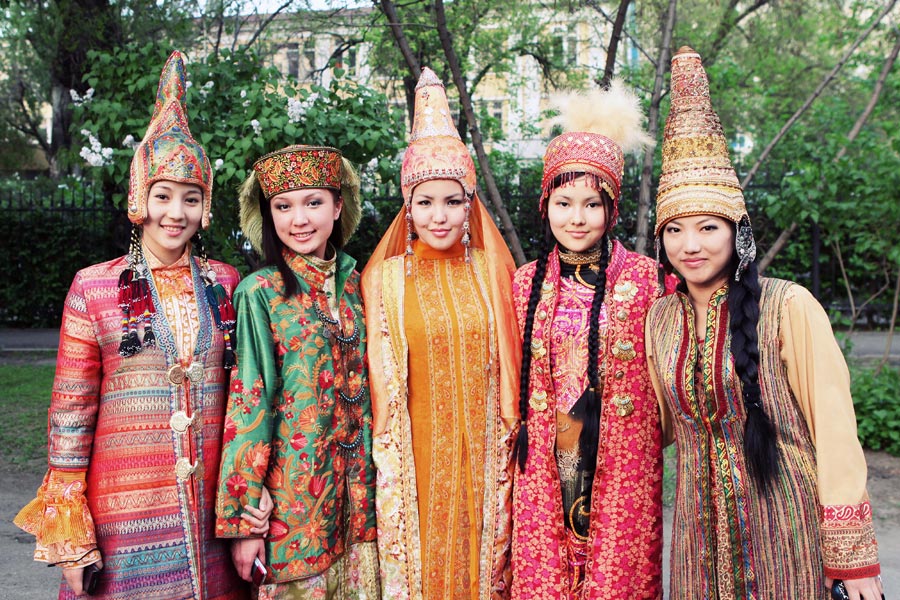 Kazakh cultural heritage is reflected in its national dress. Life on the steppe and various nomadic religious beliefs influenced traditional Kazakh clothing—it was practical in that it protected from the cold and windy weather, was comfortable to wear on horseback, and was also made of natural materials. The quality of Kazakh clothes and their individual elements also made it possible to ascertain the social status of a Kazakh and the family or clan to which he belonged. Traditionally, poorer people wore clothes made from the skins of wild animals while the rich sometimes made theirs from imported materials such as silk and velvet.

Kazakh clothes were manufactured using leather, other animal skins, or fur. Kazakhs perfected leather processing, the manufacturing of high-quality felts, and other methods for creating their traditional clothing. As a result, Kazakh products were highly valued in the markets along the Great Silk Road.

Along with a high level of practicality, ornamentation played an important role in traditional Kazakh clothing. Attention was paid to its decoration via various patterns, precious stones, or expensive kinds of furs. Men and women also wore wide belts with gold or silver buckles or other decorative elements to emphasize their status and appear more elegant. Wealthier people also tended to wear several layers of clothing: practical and simpler on the bottom, expensive and richly decorated on top.

Boots were the Kazakh national shoe. In the summer, soft, comfortable leather boots with a heel up to 8 cm were common. In winter, felt stockings and knee-high boots made from coarse leather were worn to protect from the elements. Women's boots were also decorated with embroidery and various overlays.
Today, Kazakh national clothes are a rare sight. These clothes are mostly seen in rural areas, at various ethnic festivals, or on display in museums.

Traditional women's clothing in Kazakhstan consisted of a long dress or shirt, pants, hat, and could also include a vest or robe. In winter, fur coats were worn to protect against the harsh Kazakh winters. What women wore also depended on age and social status. Young girls, for example, often wore red. However, after turning 30, it was considered indecent to wear this color. By contrast, middle-aged and elderly women mostly wore blue and black dresses, and, with age, less and less jewelry.

The material for women's clothing was typically thin felt or colorful chintz. Rich Kazakh women wore silk and velvet dresses. The cut was close and had a closed collar, although a new cut became popular in the 19th century: a detachable dress with a bodice. Dresses, camisoles, and shirts were decorated with patterned embroidery, sewn appliqués of bright fabrics and stripes of fur, and fastened metal or silver buckles and buttons.

The unique attire of Kazakh brides also deserves special attention. Bridalwear included a camisole, robe, and a dress-shirt called a koylek. A distinctive conical “saukele”, or headdress, was also worn and could be well over 30 cm tall. The “zhelek” was the Kazakh equivalent of the bridal veil. White is not a traditional color for brides in Kazakhstan, however, because it is seen as the color of mourning. Brides’ colors were often chosen to correspond with her family or the region from which she came.

Men’s clothing in Kazakhstan consisted of a simple shirt, pants, and a hat. It was the “shapan”, or dressing gown, that was used to convey social status and was considered the most important item of clothing. Shapan could be made from all sorts of fabric and be beautifully multi-colored, however plainer shapan with dark colors were considered the norm. Ceremonial shapan, for example, were dark blue or black but also decorated with gold embroidery. Such ceremonial robes were made to be given to respected people and important guests, and this tradition is still very popular in Kazakhstan.

Kazakhs take a special attitude with their headdresses: they never wear the hats of others and do not give their own—it is believed that doing so transfers misfortune and illness or can cause you to lose your happiness and luck. Hats are to be carefully removed and put in a safe place, and under no circumstance should a cap be placed on the floor or chair. There are many types of headwear in Kazakhstan, including: takiya, kalpak, borik, kimeshek, tymak, and others. The most interesting headdress, which is considered one of the symbols of Kazakh culture, is saukele.

Saukele - a unique, handmade bridal headdress. It is believed that the higher the saukele, the more respect the bride shows for the groom's family. Some saukele, therefore, reached 70 cm in height. The Saukele is also the most expensive piece of bridalwear and can be decorated with precious stones, gold or silver, and other elements. Sometimes the cost of the headdress is equivalent to a herd of horses, but the bride only wears it once—at the wedding.

Kasaba - elegant hat, which the young wife wears to replace the saukele and before the birth of her first child.

Kimeshek - a tall, white turban which a woman wears after the birth of her first child and until the end of her life.

Takiya - a skullcap worn by people of all ages in Kazakhstan. It is sewn from silk, velvet, and other materials. Among younger Kazakhs, “zer-takia”, an embroidered skullcap with gold or silver thread, is popular. Sometimes takiya serve as a lining under other headdresses.

Kalpak - a popular felt hat amongst Kazakh men. There are also “ayyr kalpak”, an expensive version of this hat decorated with precious fabrics or gold embroidery in the form of plant ornaments.

Borik - a hat with a fur edge. Originally, the fur came from wolves, although today the fur is usually that of an otter, a fox, a beaver. It is worn in both summer and winter. There are men and women’s borik hats, which differ only in decoration.

Tymak - a warm winter hat made of sheepskin. Tymak are sewn so that, during winter on the steppe, they perfectly protect the wearer’s head, neck and shoulders from wind and cold. This hat is also a key part of the national horse game, "Tymak uryp zhygu", during which riders try to knock it off a pole.