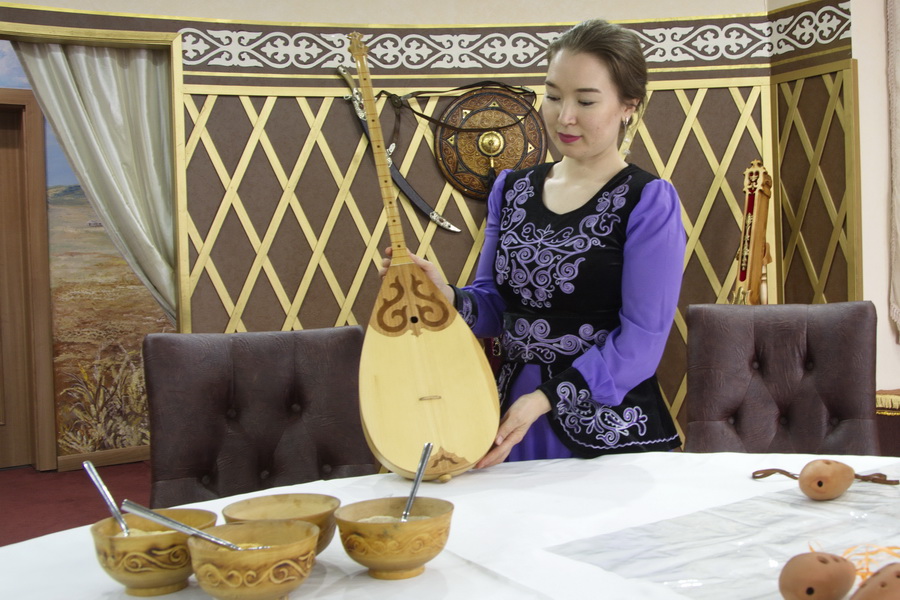 Kazakh folk music has a long history and is closely connected with the country’s traditional folklore. Legends, fairytales, and epics were told through the years with mostly improvisational musical accompaniment. And for much of the country’s history, there was no musical notation. This meant that musical knowledge—including the complex rules and rhythms that govern traditional Kazakh music—was transferred from teacher to student orally.

Kazakh musical instruments have a well-documented history, however. Originally intended for giving signals during the hunt or for religious shamanistic rituals, the most famous instruments in Kazakhstan are the kobyz, dombra, dabyl, and zhetygen.

The kobyz is an unusual stringed instrument made from a single piece of wood in which a hemispherical resonator with two compartments is hollowed out. Kobyz are traditionally made from horsehair. The dombra, still common in several Central Asian countries and one of the oldest instruments in the world, is a two-stringed instrument with a drop-shaped resonator. Dabyl are timpani-type percussion instruments, similar in shape to the pan, with a round, leather-covered drum on both sides. Zhetygen are seven-stringed, plucked instruments, reminiscent of the Russian "harp" or Chinese "tsishintsin." Zhetygen are also some of the oldest instruments still played today and are often heard as solo instruments in Kazakh musical works.

Kui, a distinctive musical genre born between the 15th and 18th centuries in Kazakhstan and unique to the region, is performed on the dombra with a special tonality and rhythm. The most famous performer of kui is the Kazakh composer, Dauletgerey, who lived in the 19th century.

In the 19th century, the arrival of Russian colonial troops pushed Kazakh music to become more integrated with world music. A mutual enrichment took place with Kazakh musical traditions being studied by Russian and European musicologists and Kazakh musicians becoming acquainted with different styles of music from around the world. New names also popped up in Kazakh music as a result: Abai Kunanbayev, Kurmangazy Sagyrbayuly, Ykylas Dukenov and others.

At the beginning of the 20th century, a school of classical music was opened in Kazakhstan. During this period, folk orchestras were formed, newly schooled composers wrote symphonies, and both the opera and ballet became social events. The result was a synthesis of classical and Kazakh folk music. Work also began on preserving traditional Kazakh music—folklore-inspired works and collections of folk music such as “500 Kazakh Songs and Kuis” were recorded for posterity.

Today, Kazakh folk music is considered an important part of Kazakhstan’s cultural heritage. Composers and musicians continue to create new works with an abundance of folk motifs and the history of musical creativity is being preserved. One of the best ways to get closer to the history of Kazakh music is to visit the Museum of Musical Instruments in Almaty.