10 Things to Do in Kazakhstan

There are only 8 countries larger than Kazakhstan in the world, and each of the country’s 14 regions are full of wonderful and unique sights that travelers are sure to enjoy. We could probably fill a book with all the places we love, but here are some of our favorite places and experiences to try on your to vacation in Kazakhstan.

1. Listen to the melodies of Kurmangazy. You can read as many books as you want on the great steppes of Kazakhstan, but in order to fully understand the soul of the earth and the Kazakh people, you need to listen to their music. Kurmangazy was a composer and musician who played the dombra, a long-necked instrument with two strings. He was proud and spirited, and was sent to prisons in Siberia. He managed to run, thereby also saving his wife and children from captivity. His free soul can be heard in many of his songs about the open steppes and his life in Kazakhstan.

2. Enjoy the view of Nur-Sultan from Bayterek. As one of the youngest capital cities in the world, Nur-Sultan (ex Astana) is a must-visit for any Kazakhstan vacation. Nur-Sultan became the capital in 1997, and was designed by a world famous architect to both preserve the past and develop a bright future for the city. This future is on display throughout Nur-Sultan, from the Palace of Peace and Reconciliation to the Bayterek Tower, a symbol of the city’s heritage and modernity. Even in the hot summers and cold winters, Nur-Sultan’s buildings will make for a fun and comfortable vacation in Kazakhstan.

3. Explore Kazakhstan’s spiritual history in Turkistan. This historic city has seen centuries of history, since the times of Khoja Ahmad Yassavi, who was a poet and preacher who spread learning and Islam throughout Central Asia in the 12th century. He spent his life in the city known known as Turkistan, which, after his death, flourished into an intellectual center. The architectural monuments of Turkistan, from the great poet’s mausoleum (built by Timur in the 1390s) to the medieval baths, are some of the most famous buildings in Kazakhstan. 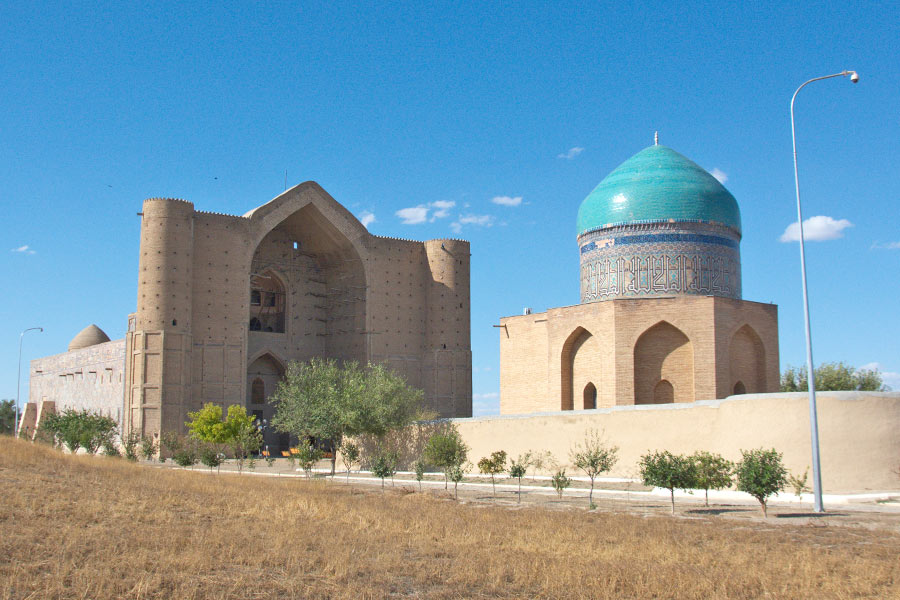 4. Hear the haunting Singing Dune. In Altyn-Emel State National Nature Park is a natural phenomenon famous for its unusual talent - singing. The Singing Dune is about 150 m (500 ft) tall, and stretches almost 3 km (2 miles) long, and on a windy day, makes a sound like an organ. There are many legends about the dune, from demons to other supernatural forces, but scientists think that the sound actually comes from the grains of sand rubbing together when the wind pushes them around. Surrounding the dunes is a vast desert, filled with rare plants and animals, and a taste of the untouched nature that covers much of Kazakhstan. 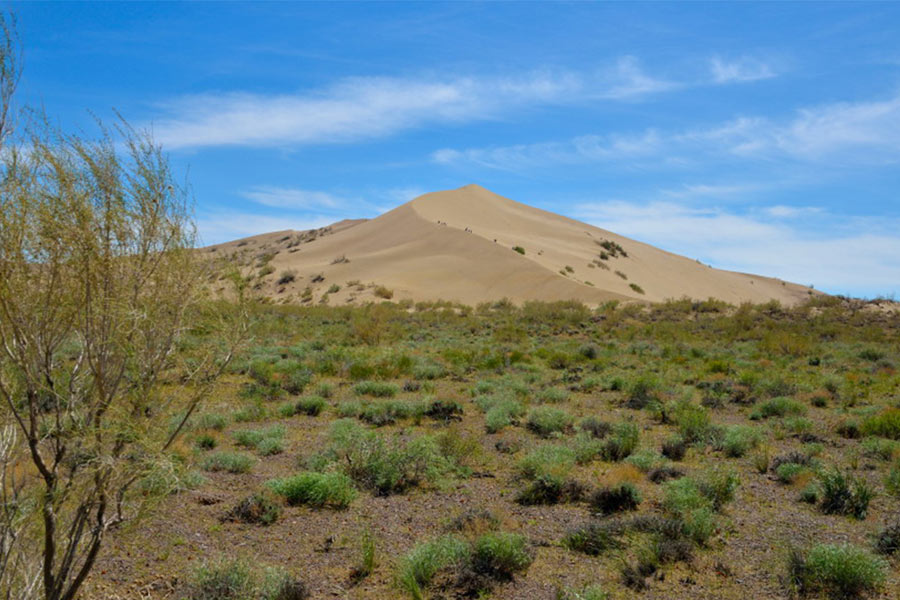 5. Climb to Medeu and Shymbulak. Medeu is a sports complex built in the mountains above Almaty, just below the mountain resort of Shymbulak. Even though Medeu’s history is only a couple decades old, the skating rink has seen almost 50 world records be set and has hosted a number of international competitions. For those of us with a little more average skillset, the rink is open year-round for anyone to come and skate, and there are plenty of events scheduled too. Even for those who aren’t interested in winter sports, it’s worth a trip up to the restaurants and venues around Medeu and even just to admire the view of the mountains. 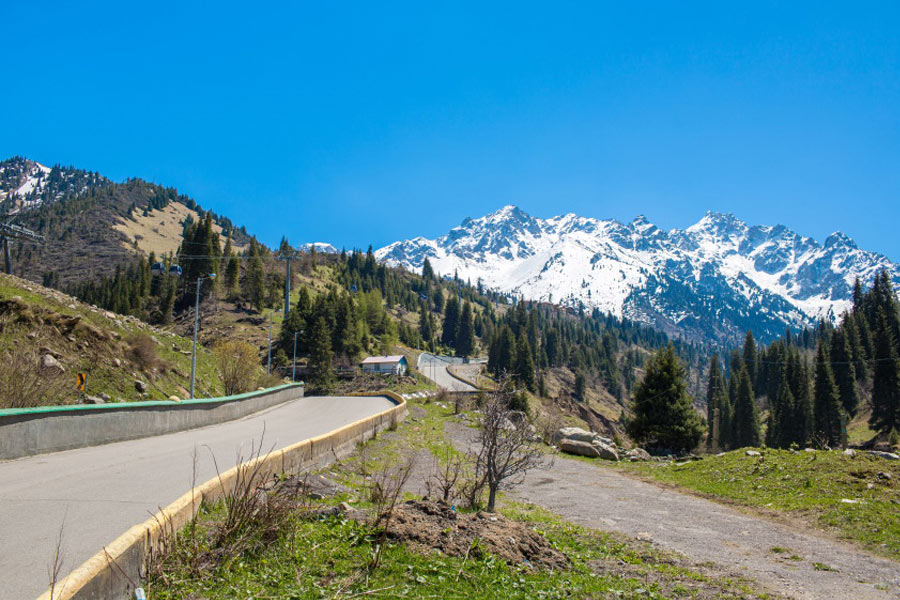 6. Feel the power of history at Tamgaly. There’s nothing quite like walking through a dramatic gorge filled with petroglyphs, each drawn by someone who lived centuries ago. Tamgaly is a canyon to the north of Almaty, with just about 2,000 petroglyphs covering its walls. Many are from the Bronze Age, and their animal-inspired designs speak of artistic vision that stretches across centuries. Some images are newer, and feature designs relating to Buddhism and Tibetan inscriptions. This is where Tamgaly Tash gets its name - tamga designs were used by nomads to mark their property. These simple designs echoed the ancient paintings already on the rocks (and sometimes covered them up), and saved them so they could reach us in the present day. 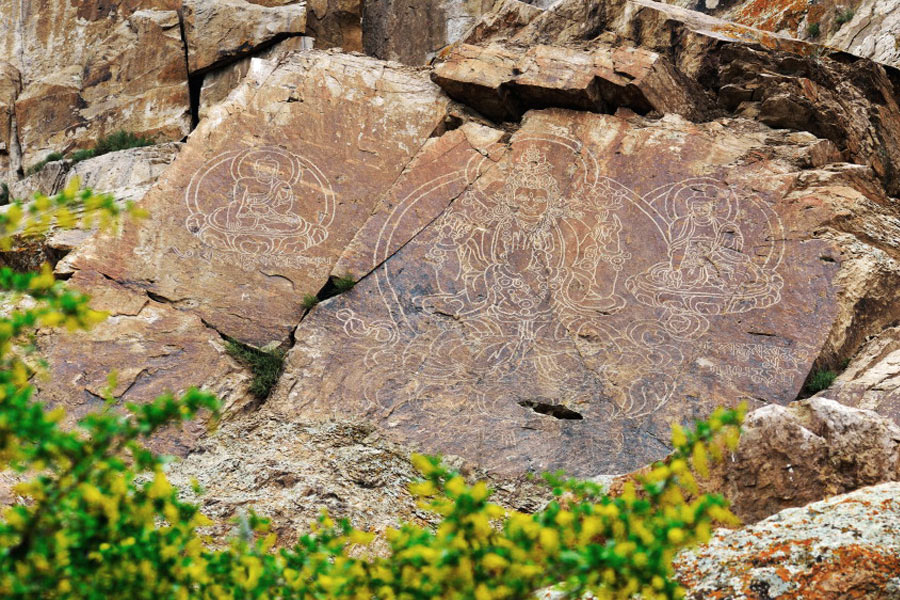 7. Become an astronaut at Baikonur. The biggest and busiest cosmodrome in the world is Baikonur, on the edge of the desert. The first man in space, Yuri Gagarin, lifted off from a launchpad at Baikonur, and today, the cosmodrome is the only launch facility launching manned flights for the International Space Station. Learn about spaceships and the history of spaceflight as you visit the museums and facilities at Baikonur. Advantour even offers specially-organized trips to witness launches, for those who want to make their Kazakhstan vacation to the next level. 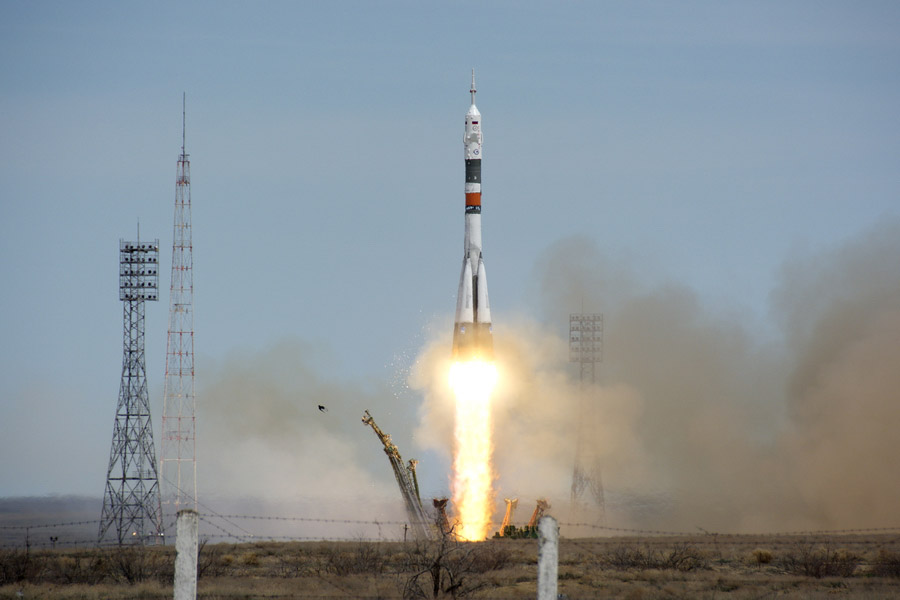 8. Breathe the fresh air in Burabay. Legends say that the Kazakh people were upset when God only gave them arid steppes for their land. So northern Kazakhstan was gifted with an extraordinary place, with slopes of fresh-smelling pine trees and bright blue lakes. Burabay has been a protected place since 1898, and is home to a number of unique and endangered species, as well as many spectacular protected landscapes. For the more adventurous, Burabay offers a number of hikes, and for those looking for a break from the bustle of cites, look no further than a picnic on the shores of a pristine alpine lake. 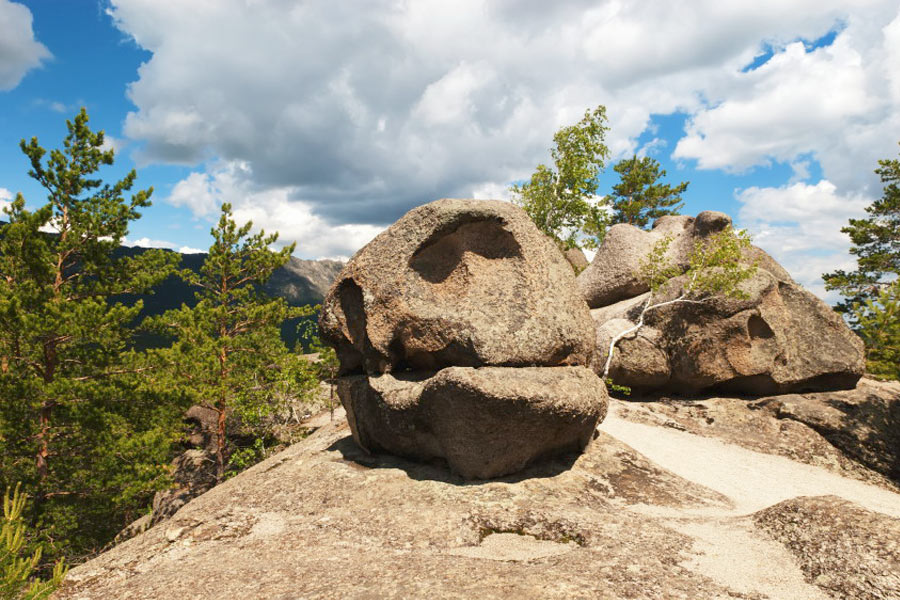 9. Hike along the shores of the Big Almaty Lake. If you find yourself looking for a trip outside Kazakhstan’s southern capital, Almaty, look no further than the Big Almaty Gorge and the Big Almaty Lake. In the shadow of snow-capped peaks lies a serene lake, fed by melting mountain glaciers. In the frozen winter, you can practice your ice skating, and in the summer, you can head off on an excursion deeper into the mountains, even if you’re just a short drive from Almaty. 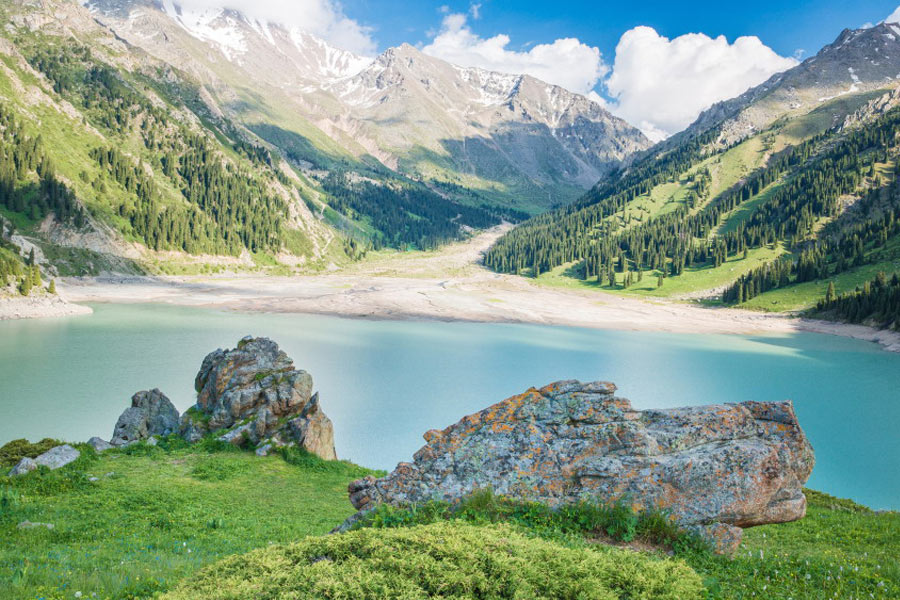 10. Taste the rich flavors of beshbarmak. Kazakh men like to say that they eat the second largest amount of meat in the world - after wolves. So no vacation in Kazakhstan is complete without trying one of Kazakhstan’s most beloved dishes - beshbarmak. Made from boiled meat (sometimes several kinds, including horse, beef and camel) with wide noodles, beshbarmak is a hearty dish, meant to fill you up after a long day out on the steppes. Top off a meal with some fresh kumis, made from fermented mare’s milk. 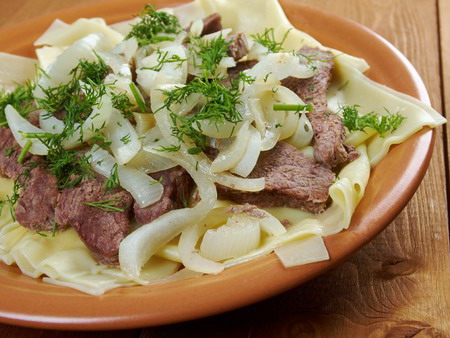