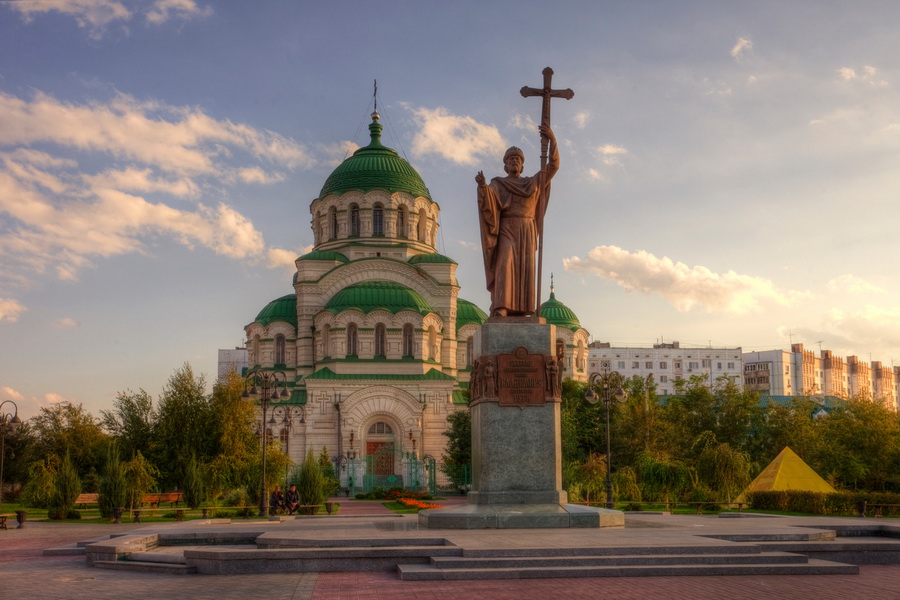 Tours, Attractions and Things To Do in Astrakhan

Astrakhan, a city in southern Russia located between the Volga River and the Caspian Sea, has long been viewed as a land of abundance whose giant watermelons, delicious sturgeon and black caviar never fail to delight tourists. Hunting and fishing are so prominent in the area that they are regarded as some of its main tourist attractions, although the city’s historical architecture and cultural attractions are also noteworthy.

The capital of Astrakhan Region, Astrakhan is the proud homeland of two 19th-20th century figures, the outstanding poet Velimir Khlebnikov and the talented artist Boris Kustodiev, as well as several relatives of Lenin. The city inherited a rich culture from the many peoples who inhabited the region at varying times in history, leading Khlebnikov to refer to his hometown as "the triangle of Christ, Buddha and Muhammad.” Today it remains one of the most multinational cities in all of Russia.

The history of Astrakhan began in the 13th century when it was appointed as one of the capitals of the Mongol Golden Horde and later as a center for the Tatar Astrakhan Khanate. The city was officially founded by Ivan the Terrible in 1558 after a long but victorious struggle for access to the Caspian Sea and the Middle and Lower Volga Regions, which up until that time lay under the control of the Kazan and Astrakhan Khanates. After being captured by a Cossack breakaway group headed by rebel leader Stepan Razin in the 1670s, Astrakhan eventually returned to Russian control and became a launching point for forays into Central Asia and Persia. As Astrakhan’s population increased, spacious streets, beautiful cathedrals and international trading centers were built. The city lived under the threat of German attack during much of World War II, yet never actually fell into enemy hands.

Today Astrakhan is a modest city whose streets are lined with beautiful architecture and historical monuments. Apart from its booming fish industry, Astrakhan is best known for its dominating feature, the Astrakhan Kremlin.

The crowning beauty of Astrakhan is the white-stone Kremlin on Zayachiy Bugor Hill, erected in the latter half of the 16th century. Surrounded by powerful fortress walls, Astrakhan Kremlin includes more than twenty objects of historical value.

The magnificent emerald-domed Trinity Cathedral is a 16th-century masterpiece and the Astrakhan Kremlin’s oldest structure. Assumption Cathedral, an 18th-century Catholic church built in the Moscow Baroque style, once evoked the admiration of Peter the Great and remains a highlight of the complex to this day. Cyril Chapel reflects an architectural style which was popular in the Russian Empire at the time of its construction in the 17th century. The bell tower of Prechistenskaya Gate, the tallest building in the Kremlin, is visible from anywhere in the city.

Astrakhan Kremlin is surrounded by White City, a historic settlement where mosques and the farmsteads of eastern merchants have been preserved. Most notable in White City is Demidov Courtyard, a complex of 17th-century warehouses spread across an entire block, behind which is a large plaza where a lively market was once staged. Another striking landmark of White City is the eight-sided Tent Tower, built in the early 17th century and decorated with multicolored tiles. Today it is the only surviving building of Monastery of the Transfiguration of the Saviour.

Astrakhan is also noted for its classical-style buildings, stone houses and historic manors which adorn Plats-Paradnaya Square, Nikolskaya Street and the picturesque Red and May Day Embankments. The luxurious interior décor of Church of St. John Chrysostom near the Kremlin is also worth a visit.

In addition to historic sites, Astrakhan offers tourists a promising cultural program. This multinational city will pleasantly surprise you with its hospitality, while the mild climate is conducive for leisurely strolls and outdoor activities.

Astrakhan City History Museum will introduce you to centuries of local culture and to the diversity of Astrakhan’s animals, plants and aquatic life. The museum is especially proud of its huge stuffed beluga and sturgeon.

The beautiful interior of Velimir Khlebnikov House Museum - known for its magnificent oak parquet floor, beautifully carved stair rails and the graceful stucco moulding on its ceiling - has been perfectly preserved. Personal belongings of Velimir Khlebnikov which are on display at the museum include family photographs and a library.

Theatergoers will appreciate the famous Astrakhan Drama Theater. Countless performances have been staged within its walls over the course of its 200-year history, and today it continues to offer an interesting repertoire sure to delight visitors. The new Opera and Ballet Theater building has already made a name for itself since opening in 2010.

The cultural-historical center of Sarai Batu is a unique outdoor museum complete with magnificently recreated streets, ancient buildings and Mongolian yurts reflective of the era when Astrakhan served as the capital of the Golden Horde.

Families with children can create memories at the Astrakhan House of Crafts, where young and old alike can participate in master classes in pottery, weaving, painting, ribbon embroidery or doll making from scarves. Astrakhan Planetarium, located next to Swan Lake, is another option sure to be fun for the whole family. A favorite at the planetarium is the 4-D Star Hall Theater, where space history is retold through fun and unforgettable films.

Most guests to Astrakhan would love to take the city’s famous watermelons and sturgeon home with them! For longer-lasting keepsakes, consider some traditional keychains and business card holders made of fish skin. You can also find plenty of T-shirts, mugs and magnets imprinted with a Caspian lotus, the official symbol of Astrakhan.

Triumphal Arch and Walk of Fame