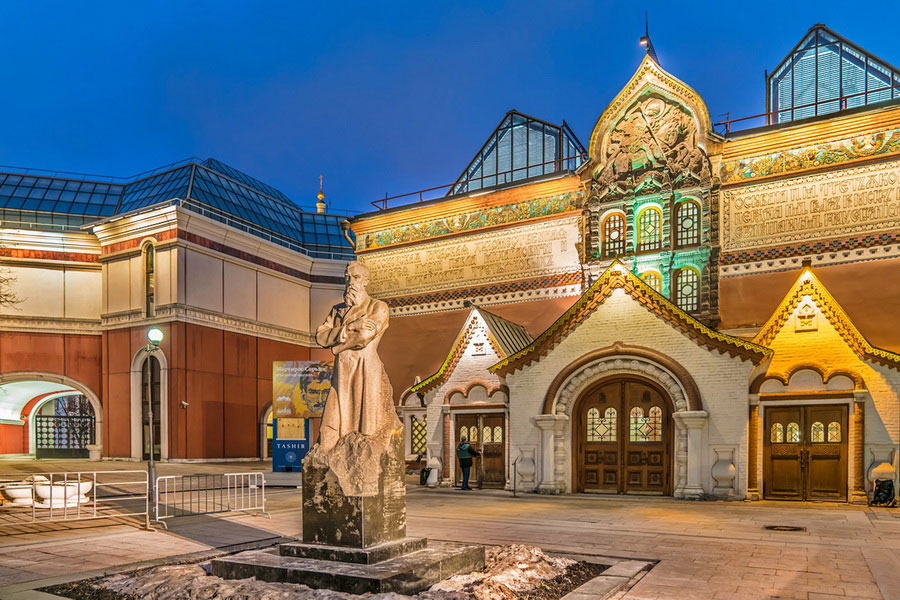 Moscow-based temple of painting, the unique collection of Russian creative art, the famous Tretyakovka is located in the oldest part of Moscow – Zamoskvorechye in Lavrushinsky Pereulok. Hundreds of thousand people come there every year to see the authentic treasures of Russain painting. This world's major museum of Russian art is ranked among the most famous. The museum was called after its founder, Moscow merchant and factory owner, well-known patron and fan of painting – Pavel Mikhailovich Tretyakov (1832 – 1898). Pavel Tretyakov spent most of his life collecting works of Russian artists. His first purchases were made in the mid-1850s, which are considered the beginning of the Tretyakov Gallery. At first he bought the works of little-known contemporaries. Then, the collection expanded thanks to such masters as Repin, Kramskoy, Savrasov and other. The collector himself commissioned the portraits, he was very much interested in their work, thus helping the development of this genre. Tretyakov and many outstanding artists were good friends.

By 1872 the paintings there were more than a hundred and fifty canvases in the collection, and in the spring of 1874 Tretyakov bought a two-storey building for it. In 1892 Tretyakov donated his collection, consisting of 1,287 paintings, 518 sketches and 9 sculptures, to Moscow. The collection of paintings was housed in Tretyakov's house, in Lavrushinsky Lane, where the family of the patron moved to in the early 1850s. By 1918 gallery turned into an outstanding collection of works of national art. Since then, the museum was renamed the State Tretyakov Gallery. In Soviet times the collection increased to 100,000 pieces thanks to the funds transferred there from other museums, nationalized private collections, purchases, and donations of Soviet citizens and compatriots from abroad. The monument to P.M. Tretyakov (1980) is standing in front of the entrance to the gallery.

In 1985 the Tretyakov Gallery acquired the museum the status of the All-Union Museum Association. In April 1995 the new exhibition of classic Russian art was opened in the Gallery. In 2006 the State Tretyakov Gallery celebrated its 150th anniversary. Currently, the museum collection has more than 100 thousand items. 62 halls of the Gallery display all periods of Russian art from the 10th to the beginning of the 20th century. There is also the exhibition of Russian sculptures and graphic works of the 18th - early 20th century.

The museum has the richest collection of icons of all major schools of ancient Russian art, including the works of Theophanes the Greek, Andrey Rublev, Dionysius, S.F. Ushakov. There you will be able to see the samples of Russian painting and sculpture of the 18th - first half of the 20th centuries; the most complete collection of the Wanderers (Peredvizhniki): V.G. Perov, I.N. Kramskoy, V.E. Makovsky, A.M. Vasnetsov, V.M. Vasnetsov, A.K. Savrasov, V.D. Polenov, I.E. Repin, V.I. Surikov; the large collection of works by V.V. Vereshchagin, painters and graphic artists of the late 19th - early 20th centuries.

The Tretyakov Gallery alos features works by masters of avant-garde - Kandinsky, Larionov, Malevich, Chagall and others; the representatives of more moderate trends - Konchalovsky, Mukhina, Nesterova, Pimenov, Saryan, etc. Established in 1922 department of manuscripts contains more than 200 thousand documents related to the history of Russian artistic culture of the 18th – 20th centuries as well as personal funds of artists and art critics.

In addition to the main building in Lavrushinsky Lane the museum has a branch in Krymsky Val, whose vast territory is used for the permanent exhibition of national art of the twentieth century as well as various exhibitions of contemporary art.