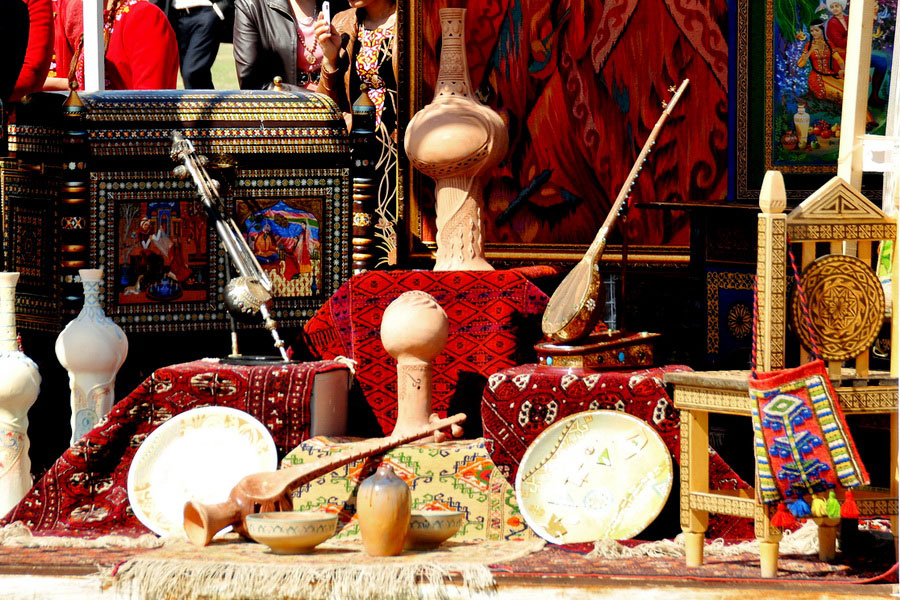 Turkmen folklore is most vibrantly expressed in the lively tradition of traveling orator- musicians known as bakhshi and in a variety of colorful folk songs used to recount the nuances of everyday culture in Turkmenistan.

One of the most beloved embodiments of Turkmen folklore are bakhshi, itinerant musicians and storytellers who for centuries have been revered in Turkmenistan. Bakhshis were popular among many Turkic peoples of historic medieval times, yet they played a huge role in preserving local epics and in popularizing Turkmen classical literature.

According to Islamic custom, a bakhshi wore special clothes, including a don (thick robe of cotton or wool), telpek (black or white wool hat), white shirt, soft leather boots and wide trousers. Wherever they traveled, these orator-musicians obtained their water from wells and used their own utensils which they always carried with them. A bakhshi did not travel alone, however, but would be accompanied by an assistant who was familiar with his mentor’s habits and tastes.

A Bakhshi wandered from village to village, singing his melodies wherever he went. Before his arrival, the townspeople would prepare for their special guest by preparing food, designating a special meeting area and considering topics of conversation for the gathering, which could attract up to two thousand people. A large carpet was unfurled, a bonfire kindled and a tablecloth spread out and laden with various sweets, fruits, chelpek (thinly sliced fried dough) and other treats. Upon arrival, the Bakhshi would begin singing at 5 or 6 in the evening and continue until 8 or 9 the next morning, taking a 10-15 minute break every two hours to drink tea and enjoy conversation with the people. Accompanied by the tunes of the stringed dutar which the bakhshi himself would play, his songs recounted folk legends, fairy tales and popular literary works.

The bakhshi are such important cultural figures in Turkmenistan that they are celebrated every year on Bakhshi Day, held on the second Sunday in September.

Folk songs were once an integral part of Turkmenistan culture, with separate songs devoted to work and to play. While many of these songs can still be heard, most have lost their original meaning. For example, centuries ago the Turkmen worshipped a god named Suyt Gazan, believed to provide protection and rain. Although celebratory songs which were sung to Suyt Gazan still exist, today they are played only as children's melodies.

Turkmen folk songs are mainly comprised of romantic lyrics, with separate songs for men and women. Men’s songs include many figurative metaphors, comparisons and epithets, while women's songs, called lale, recount the personal feelings of women and often speak of the difficulties of being female.

One type of folk song which remains very popular in Turkmenistan is the aydimi, a common chant centered on everyday themes. There are aydimi songs dedicated to almost every aspect of life, including motherhood, rocking babies to sleep, children’s play, weddings, manual labor, carpet weaving and milking camels, to name a few. It is through the Turkmen aydimi that many compositions of classical Turkmen poets have reached us today.

National epics called destan are lengthy musical compilations of poems, legends, fairy tales and traditions. Chanted to the accompaniment of the stringed dutar, they remain popular in Turkmenistan even in modern times.

The originality of Turkmen music is also expressed in the local manner of singing with great tension of the vocal cords and a high-pitched voice. These peculiarities may be attributed to the country’s steppe-and-desert landscape and the people’s nomadic way of life, which undoubtedly contributed to the Turkmen habit of speaking loudly. Echoing in sharp contrast with the quiet, gentle sound of the dutar, these booming songs tell marvelous stories of brave locals and beloved Turkmen folklore.