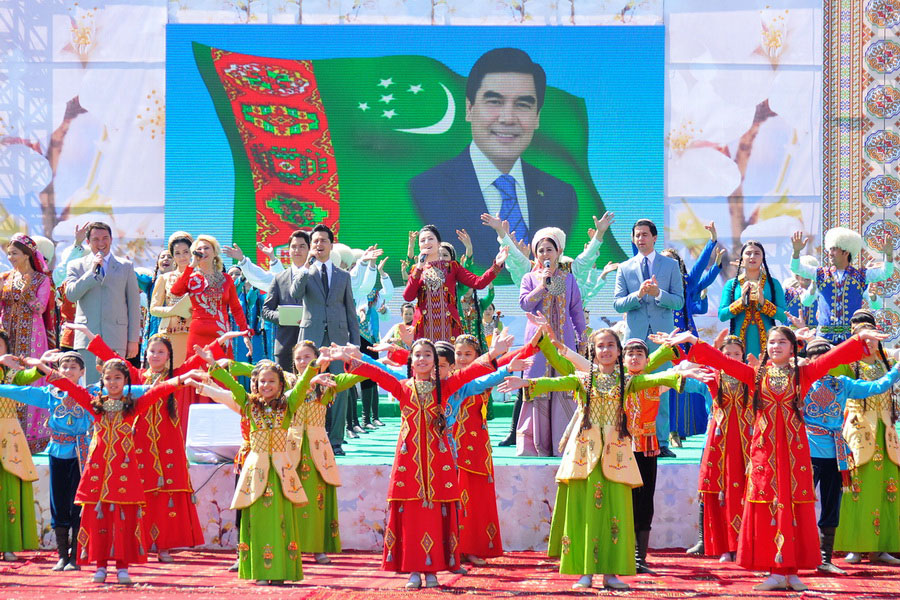 Turkmen music and dance gracefully reflect the local culture and play a key role in national celebrations. The ancient roots of these art forms is evidenced in the archaeological finds of household items decorated with images of musicians and in the ancient tales of skilled songwriters which have been preserved in local folklore.

Local folk dances are nothing short of colorful displays of Turkmenistan art, for every movement is carried out with precision in order to convey a special meaning. Turkmen dances have absorbed many traditions through the ages and today demonstrate the uniqueness of this tribal culture.

Kushtdepdi is one of the most famous and ancient Turkmen folk dances, as evidenced by a fresco discovered at Old Nisa which depicts a group of dancers whose movements are reminiscent of kushtdepdi. The dance begins with the flowing movements of a girl and a boy who are encircled by other dancers clapping their hands. During the dance, quatrains called gazala are performed, each of which ends with loud exclamations of "uh-hu", "hey-ha" and "kusht-kusht". The dancers in the center determine the rhythm, which is then echoed by those around them. Kushtdepdi usually ends with a loud cry of "huv-hak", after which the dancers stop and bring their palms to their faces. Kushtdepdi is performed in traditional costumes of crimson and burgundy.

Historically, kushtdepdi was endemic to the Turkmen Yomut tribes who inhabited the Caspian Sea coast, and it was only at the end of the 20th century that it began to be performed around the country. Today it is included in the UNESCO List of Intangible Cultural Heritage and is performed almost exclusively at cultural festivals in Ashgabat and elsewhere.

Some of the most widely-recognized instruments indicative of Turkmenistan culture today include:

- Oscar – Turkmenistan’s oldest musical instrument dated to the 3rd century CE. This ceramic wind instrument sounds like a flute and became widespread not only in Turkmenistan but in India, Pakistan, Iran, Afghanistan and Kazakhstan.

- Gopuz - A stringed, plucked instrument which is held by the musician between his lips as he manipulates it with his tongue, creating a very unusual sound in the process.

- Gidjak – A popular stringed instrument which has been nicknamed the “oriental violin”. Unlike the dutar, the gidjak is played with a bow.

- Tuyduk - A wind instrument which Turkmen believe was used by the angel Gabriel to breathe life into Adam after he was sculpted from clay. Another popular claim is that the devil played a role in the creation of the tuyduk, a belief reflected in an ancient shamanistic ritual which is still performed in Turkmenistan today. In this custom, used to welcome guests to a celebratory event, two musicians stand opposite each other as they play their tuyduk in unison and perform magical circular movements.