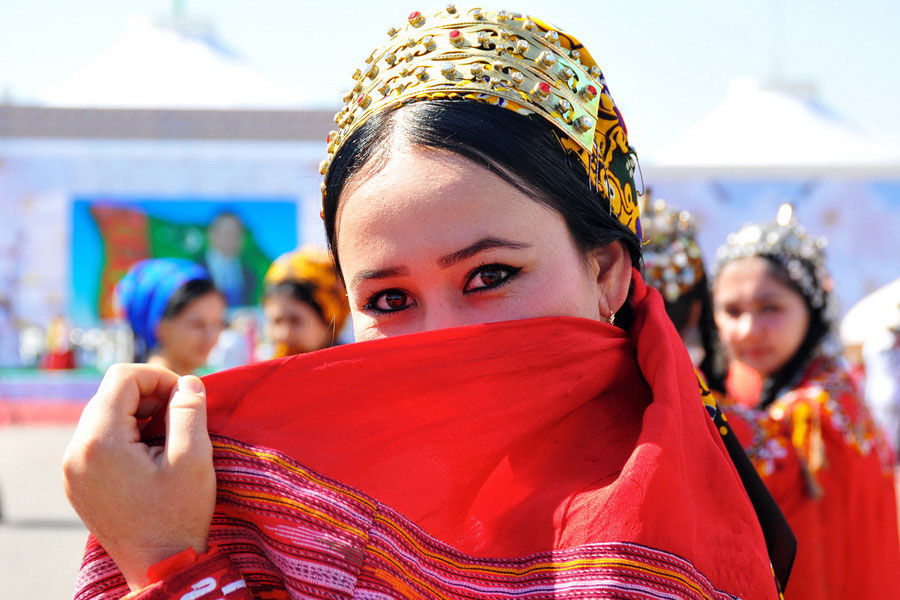 The culture of Turkmenistan holds an almost hypnotic allure with its raw and matchless authenticity. Influenced over time by ancient Iranian empires, Turkic nomadic tribes, the sedentary peoples of nearby Bukhara and the inhabitants of the Caspian Sea coastline, the customs formed across Turkmenistan’s fierce expanse have proudly survived the sands of time. The unique traditions of Turkmenistan can now be appreciated on a journey to this least-visited country in Central Asia, where tourists can ride a purebred Akhal-Teke horse, hear the exotic strumming of a gidjak, enjoy a traditional bakhshi performance, buy a Turkmen headscarf and stand in awe of the centuries-old carpet weaving process. 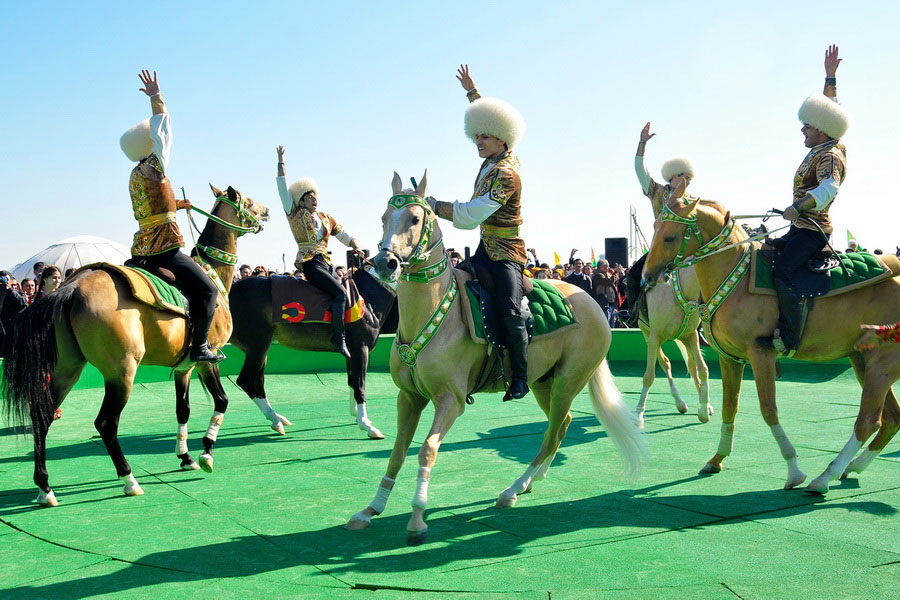 Turkmen Akhal-Teke horses are among the rarest and most highly prized breeds in the world. Believed to be descended from the extinct Nisean horse of modern-day Iran, their name is a reference to an oasis called Akhal and a local tribe known as the Teke. These one-owner stallions have been the tireless helpers of local nomads and soldiers for centuries, yet their value goes beyond speed and agility: Graceful, thin-legged and beautiful, they look like statuettes come to life. In the 20th century, the Akhal-Teke horse gained international renown after proving its abilities in international competitions, and one even joined the stables of Queen Elizabeth II. A cultural treasure, Turkmenistan now has a national holiday dedicated to this stately steed. Tourists can visit stables near Ashgabat to take riding lessons and admire these luxurious animals.

Turkmen carpets are as much a symbol of Turkmenistan as tulips are of Holland and cigars are of Cuba. Historically, nomadic tribes have used carpets as prayer rugs, decorative items, wardrobes, beds, heating for yurts and padding for camels. Carpet weaving skills have been passed down from mother to daughter for generations, and in addition to following specified techniques, the women must be careful in their selection of quality materials and dyes. Turkmen carpets are defined by their strict geometric patterns and varying shades of red, yet each tribe employs an individual design and unique ornamentation that is not duplicated elsewhere. Every rug takes an astonishing amount of time and incredible skill to complete and is therefore highly prized, with some of the most historic examples on display at the Turkmen Carpet Museum in Ashgabat. 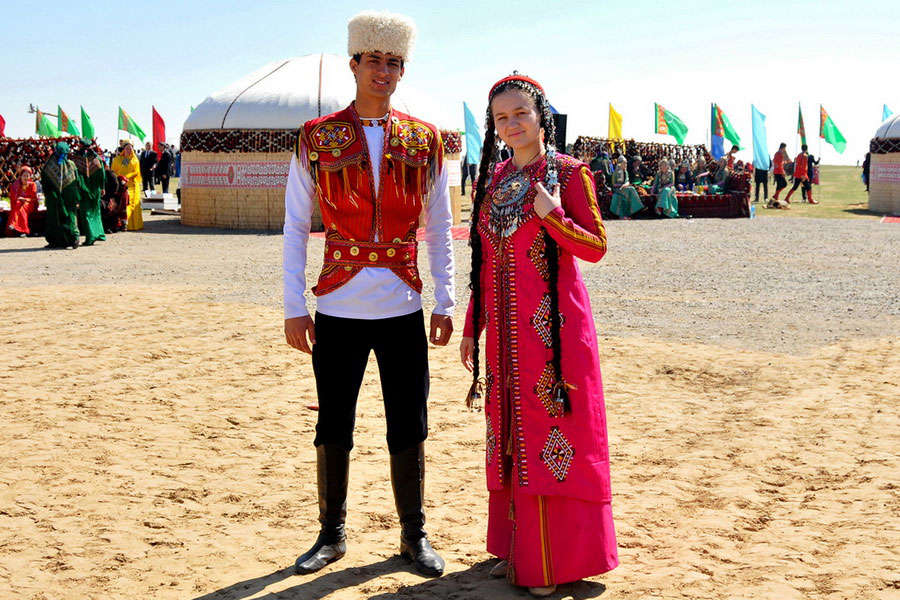 Turkmen clothing and jewelry is designed to reflect a person’s social status and region of origin, to protect from the evil eye and shield from the unforgiving climate. Even today, many people in Turkmenistan can still be seen in traditional costume, which for men includes embroidered shirts, custom shoes and sheep hats called telpek, and for women a robe and special headdress. Shades of red are especially common in Turkmenistan dress, for red is believed to have the ability to ward off evil. Jewelry is likewise valued as both an amulet and a sign of social status. It can be worn by men, women and even prized horses, and is traditionally made from silver. Turkmen jewelry often includes inserts of precious stones purported to hold magical properties and to include images of insects and animals, regarded as a link between man and nature. 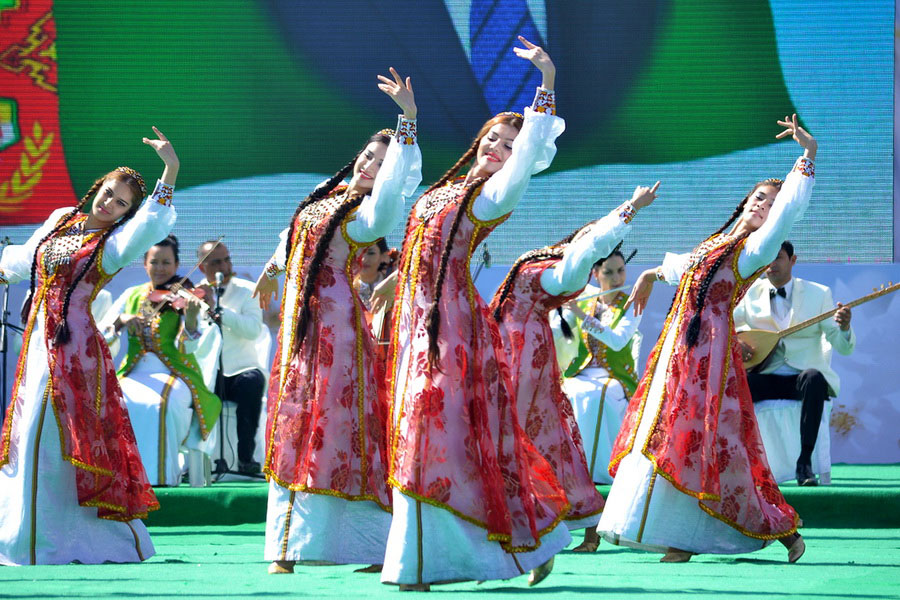 The ancient roots of Turkmen music and dance is evidenced in centuries-old household items which are decorated with images of musicians and in the historic tales of skilled songwriters preserved in local folklore. Most notable among local dances is the kushtdepdi performance, endemic to the Yomut tribe of the Caspian Sea coast but now popular at national festivals around the nation. Now a UNESCO-recognized performance, kushtdepdi is carried out with precision in order to convey a special meaning. Such dances are often accompanied by traditional polyphony, ritual instruments and many types of bells. Other popular instruments today include the stringed dutar and the tuyduk, a wind instrument which is tied to shamanistic ceremonies that are reminiscent of ancient Turkmenistan religions and still performed at local celebrations. 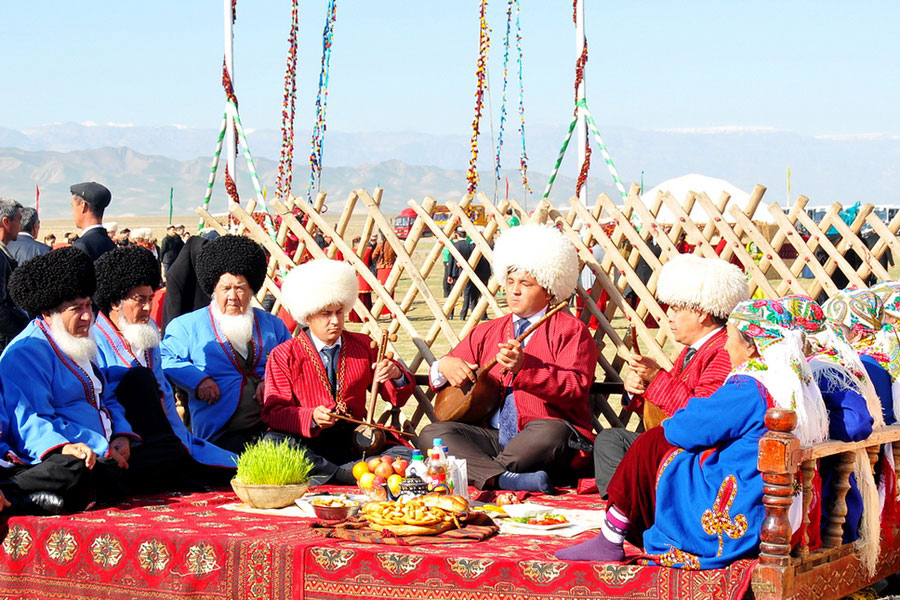 One of the most beloved embodiments of Turkmen folklore are bakhshi, itinerant orator-musicians who wandered from village to village carrying few possessions save eating utensils and a stringed dutar instrument. Performing for hours on end, the bakhshi’s songs recounted folk legends and popular literary works. Over time, bakhshi became so highly revered in the culture of Turkmenistan that they now have their own national holiday. Equally important were romantic folk songs and tunes called aydimi which centered on everyday themes ranging from motherhood and children’s play to weddings, manual labor, carpet weaving and milking camels. The originality of Turkmen folk music can be heard in the unique manner of singing with great tension of the vocal cords and a high-pitched voice, traits which developed in response to the country’s landscape and the people’s nomadic way of life.

The Turkmen are descended from an ancient people known as the Oghuz Turks, and it was the 7th-century literary developments of these peoples which set the precedent for modern Turkmen literature. Local narrative reached a pinnacle in the 18th century with the works of Magtymguly Pyragy, the Father of Turkmen Literature. Magtymguly Pyragy used folk songs and a new style of poetry to compose over 800 poems which brought him fame throughout Central Asia. In the 19th century, a slew of Turkmen writers used their voice to share stories of brave folk heroes and to highlight pressing social issues. Despite these strides, most of the traditionally nomadic population remained illiterate until the modern Turkmen language began to develop in the early 20th century based on the Tekin dialect of Turkmen. Decades of Russian rule limited the content of Turkmen literature yet also helped to solidify the local language in written form.