Nadir Divan-begi Madrasah is a part of the architectural complex located round well-known Lyabi-Hauz in Bukhara. The madrasah building, as well as khanaka nearby, were named after vizier Nadir by whose order they were constructed. Vizier Nadir served at a court yard of one the strongest and powerful representatives of Ashtarkhanid dynasty Imamkuli-khan, who ruled in Bukhara in 1611-1642. The board of Imamkuli-khan was one of the most stable and relatively peaceful for the whole history of Ashtarkhanids in Bukhara. It was time when governors paid attention not only to constant wars, but also to town-planning. 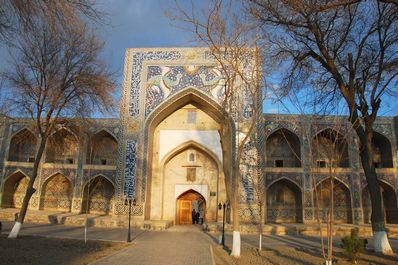 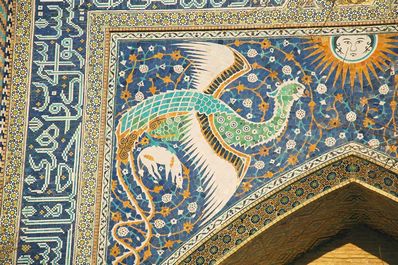 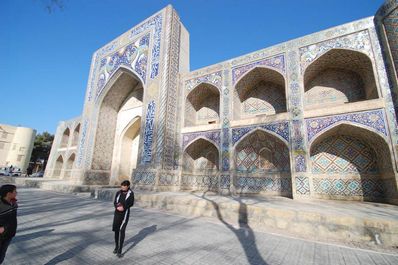 Initially, Nadir Divan-begi ordered to build khanaka (a place for Sufis to reflect and rest), later caravansari was added. However, at the opening ceremony, Imamkuli-khan said that caravansari was built in the glory of the Allah, therefore the vizier had to reconstruct it into the madrasah. The Nadir Divan-begi madrasah is decorated in the style typical for all Muslim monuments of Central Asia. At the same time, the images of birds, animals and a human being - sun were also used in decoration, and it was uncharacteristic for Islamic monuments. The Nadir Divan-begi Madrasah was built on the model of Sherdor in Samarkand but famous lions at the portal were replaced with mythical birds of happiness.

Having transformed the caravansari into madrasah, the vizier ordered to attach a loggia, a portal and angular towers to its main façade, and to add the second floor for living rooms – hudjrs. As for khanaka, it had a form of a multichamber building with the central dome hall. Hudjrs were not on the second but on the first floor, in lateral walls and building corners. The main entrance had extended form, untypical for Central Asia. Nadir Divan-begi ordered to construct pool near to khanaka and madrasah. Stone steps lead to it.. Subsequently this artificial reservoir was named Lyabi Hauz and became one of the most known sights of Bukhara.