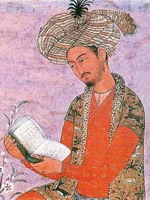 The name of Zahiriddin Muhammad Babur in the history of Uzbekistan is on a par with such political figures and military leaders as Jaloliddin Manguberdi, Amir Timur, Ulugbek, Alisher Navoi. A direct descendant of Timur, Babur created an empire of Baburids in India (in the western sources it is known as Mughal Empire) and was a loyal son of his country and the rest of his life he was fighting for its welfare and prosperity.

Babur was the son of the Timurid prince Umarsheykh, the ruler of the Fergana region. He was born in 1483. At the age of 12 years, resulting in the tragic death of his father, he became the new ruler and started a brutal struggle for power in Mawarannahr. During 1494-1496, while still a teenager, Babur participated in the battles of Samarkand, where he first met on the battlefield with his most powerful enemy, Sheybani Khan, who had an enormous impact on the fate of Babur.

Most of his life Babur spent in military campaigns and battles. He tried unsuccessfully to unite the separated regions of Mawarannahr and create a new great state of Temurids. His dream was realized in India, where he went with his troops in 1526. Babur succeeded in laying the basis for the Great Mughal Dynasty in India, which had existed for about 300 years. His ideas preached the establishment of harmony among the peoples and spread of education among the general population.

Along with his military and political activities Babur was a great poet, whose rubais (lyric quatrains) delight and inspire many people even today. He wrote one of the most famous oriental works in world literature: “Baburnama”.

"Baburnama" is personal letters of Babur, which he has kept throughout life and collected in one work. "Baburnama” is not only a description of the personal life of the author, but also a valuable source for studying the history, culture and life of the peoples, flora and fauna of various areas visited by Babur.

Babur was one of the greatest men of his time. Creating one of the most powerful empires in the history of the East, he, nevertheless, remained an ardent patriot of his country at heart and the rest of his life tried to establish diplomatic and friendly ties with his native city of Andijan.

Today Andijan people proudly pronounce the name of Zahiriddin Muhammad Babur and honor his memory. The town has a monument to Babur, as well as the House of Babur, which has been preserved to our time.