Asia Khiva hotel is located near the southern gates of the Ichan-Kala Fortress.

Bek Khiva hotel is well situated not far from the northern gates of the Ichan-Kala Fortress.

All Khiva hotels are united by a location in the historical center of the city, medieval citadel of Itchan-Kala, or near it. It is surprising, that Khiva hotels, located in the historical buildings and madrassahs, are rather a rule than an exception. It explains compact rooms, considered functionality of furniture and restaurants, located outside Khiva hotels. Not to disturb the general architectural style of ancient Khiva, called the Open air Museum, people of Itchan Kala do not change the appearance of the medieval buildings, except the interior. Khiva hotels are the amazing interweaving of an antiquity and modernity. In hotel rooms, decorated in oriental medieval luxury, you will find modern bathrooms, air conditioners, TV sets and things of civilization.

All Guest House in Khiva

Meros is a budget guest house inside the ancient Ichan-Kala fortress.

All Guest House in Khiva
All Economy Hotels in Khiva

Old Khiva hotel is located 50 m away from Ichan-Kala, near the western gates of the fortress.

Islambek Khiva is a cozy hotel in the Ichan-Kala Fortress.

Kala hotel is a picturesque hotel in the ancient quarter inside the old city of Ichan-Kala.

The small and cozy Hotel Shokhjakhon is located right next to the walls of the Ichan-Kala Fortress in Khiva.

All Budget Hotels in Khiva 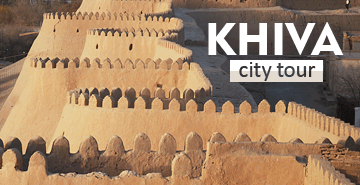