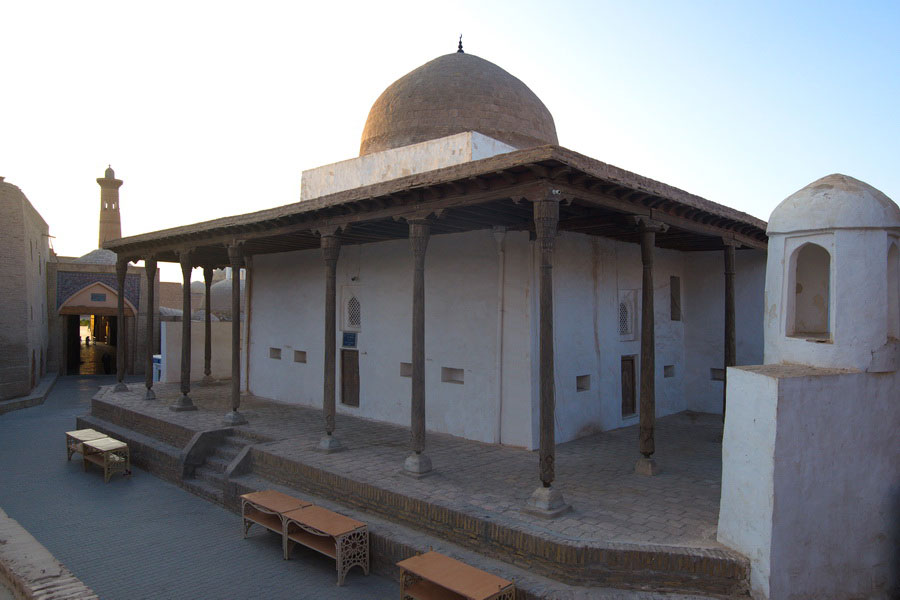 Khiva is one of the most beautiful cities of Uzbekistan. Over a period of its existence the city did not change much, which fact adds even more fascination to it. Among the numerous monuments of the city the buildings located in the territory of Ichan-kala (inner town) are especially prominent. There located palaces of the rulers from the Sheybanids and Kungrat dynasties as well as numerous madrasahs and mosques.

The mosques in the East were places to administer divine services and prayers. The word “mosque” itself originates from Arabian “maszhid”. The majority of the mosques in the East represent a one-storey building with a patio. Opposite a mosque doorway there was a hall for prayers and in one of the corners of it there overlooked a minaret from which a muezzin announced the beginning of prayers. The walls in the prayer hall were inscribed with verses from the Qoran. The wall which faced Mecca had an empty ambry – mikhrab where the imam was praying. To the right from mikhrab there wass a stand – minbar from which a preacher imam read sermons to the believers during a Friday prayer.

Unlike the standard mosques Ak-Maszhid in Khiva has an original architecture. This quarter mosque to administer a daily prayer five times a day is located near the eastern Palvan-Darvoza gates. Ak-Maszhid was built in several stages. In 1647 under Seybanid Anush-khan the mosque foundation together with the Anush bath-house was established, but it was not earlier than1838-42 under the Kungrat dynasty regiment when the building itself was completed. This fact is certified by an inscription on the mosque door which also reads that the wood engraving was made by Khiva Masters Kalandar and Nur Mukhammad.

The building represents a domed hall to which three galleries adjoin. Since Ak-Maszhid is a quarter mosque for daily prayers, it was built and decorated without special ornamental excessiveness. The only decoration of the mosque is possibly doors and windows decorated with a first-rate wood engraving. The windows of Ak-Maszhid are decorated with ganj grids representing a polyfoil. The south wall of the mosque where a mikhrab is located oriented the believers to Mecca.

The square foundation of the mosque is covered with a white hemispherical dome. The hall for praying itself is 6.33x6.35m. The walls of the praying hall are covered with ganj plasterwork of white color. From three sides of the hall there are aivans with wooden columns.

Ak-Maszhid in spite of its small size is one of the most beautiful monuments of medieval Khiva. Its simple but at the same time elaborated architecture distinguishes it in an advantageous way from other monuments of Ichan Kala.