Muhammad Rahimhan II is the eleventh ruler of Khiva from the Kungrat dynasty. He was born in 1845 and came to power in Khiva in 1864. His regiment in Khiva was distinguished by construction of many mosques, madrassah, bath-houses and other structures of civil architecture. The most famous monument built by order of Mukammad Rakimhan II up to date is the Muhammad Rahimhan II Madrassah, the largest in Central Asia madrassah.

Muhammad Rahimhan began construction of his summer residence Kibla Tozabog in 1897. The summer residence is a palace complex consisted of three yards of different sizes. In every yard there were large two-storey houses decorated from outside with carved wooden columns. In the territory of every yard there stand large ayvans with carved handrails and legs where the khan and his servitors used to have rest in the hottest summer days. The palace complex is surrounded by outbuildings built along its perimeter. 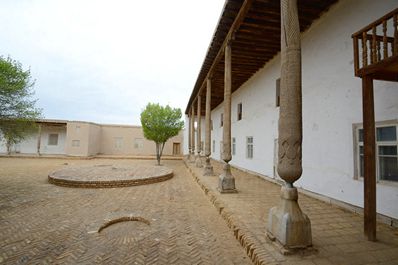 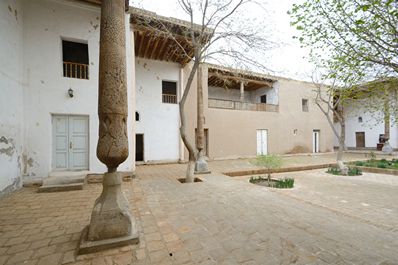 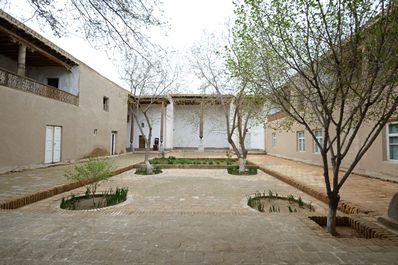 Each of the residence palaces is famous for its architectural feature. In the center of the first palace there is a basin in a form of a fountain surrounded by flowerbeds. In addition there is an audience hall decorated in a European style. One of the features of this hall is large windows which in principle are not conventional for oriental architecture.

Two other yards houses a khan’s personal chamber and his harems as well as winter and summer mosques, madrassah, stabling and household structures. All of them are built in a half-European style. Application of European architecture elements is common for the Khiva and Bukhara architecture in end of the XIX century. The both Khiva and Bukhara khanates were under protectorate of the Russian Empire at that period. At the same time the architecture of the Kibla Tozabog palace preserves the best traditions of the East and the building itself is surrounded with beautiful shady gardens ensuring shade and cool in hot days.

The Tozabog Palace was built fully in burnt brick. The residence wall are decorated with carved ganch and plated with gold. The doors for the halls and chambers were made by special order by the masters attracted from Russia. Tozabog - the Summer Residence of Khiva Emirs is one of the most beautiful monuments in Khiva of the XIX century.