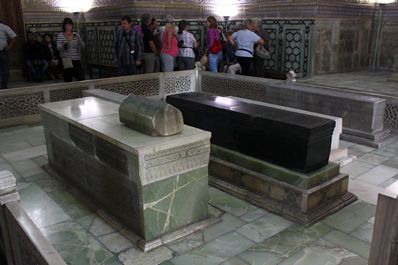 Tamerlane’s nephrite gravestone is also cloaked in mysteries and legends. Where did it come from? How did it come to Ulugbek? These and other questions are concerned with the mystery of the gravestone. According to the legend, a nephrite plate was taken by the Mongols from the palace of the Chinese emperor and installed as a throne in the palace of the Mongolian rulers. The Chinese believed that the plate was the source of divine power, and the Mongols took over this faith. There are no exact facts about how this plate was seized, but it is known that in 1425 two large pieces of it fell into the hands of Ulugbek during the battle in the village of Ketmen-tepe.

Stones were so huge and heavy that they had to construct a special vehicle to deliver them to Samarkand. Samarkand masters skillfully fitted two pieces and constructed a gravestone to Amir Timur. Today you can find it in the Gur-Emir Mausoleum. When the Iranian Shakh Nodir conquered the Bukhara Khanate in 1740, he ordered to remove the nephrite gravestone and bring it to Meshkhed. Nodir Shakh planned to make a facing of these stones in one of the holy buildings in Iran. But, by the legend, the Tamerlane’s spiritual leader Mir Sayid Bereke appeared in Nodir-shakh’s dream and said that the stone should be brought back otherwise terrible misfortune would overtake him. In the morning, Nodir ordered to bring the nephrite stone back to Samarkand and put it on the former place. But on the way to Samarkand an accident happened with a stone. While crossing the river the stone dropped and split into two unequal pieces. Anyway stones were brought back and masters again joined two pieces and put it on the former place. Therefore in the royal mausoleum of Gur Emir, which keeps remains of Amir Temur, today we can see the cracks on the nephrite tombstone.