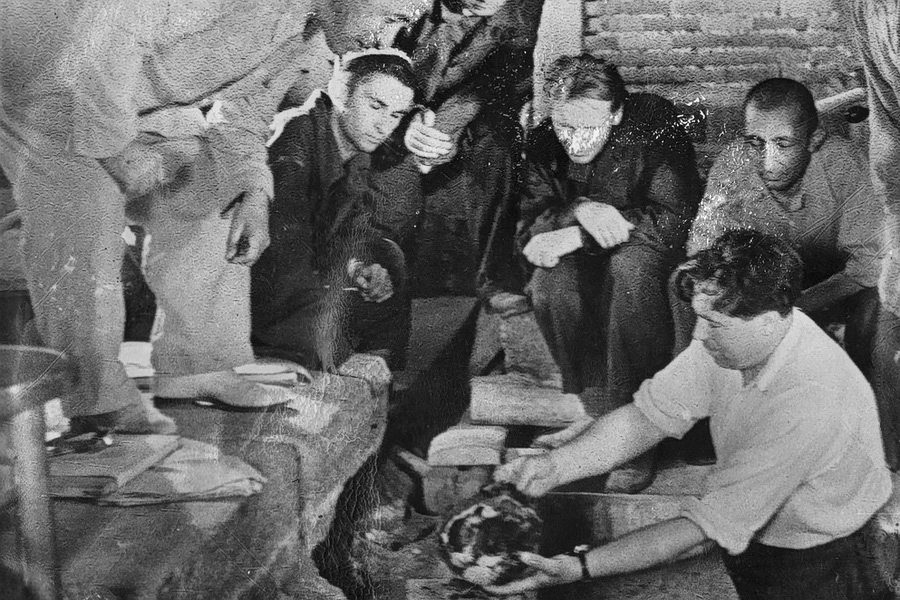 The Opening of the Tomb of Tamerlane

The news passed from mouth to mouth: "The Russian expedition is going to open the tomb of Tamerlane the Great! It will bring the curse on our heads! ". Such kind of talks floated through the bazaars and streets of Samarkand in June 1941, when an expedition led by Tashmuhammed Kari-Niyazov and Mikhail Gerasimov began excavations in the Gur-Emir.

Local residents and Muslim clergy tried to stop the excavations, but the expedition continued its work despite everything. Tashmuhammed Kari-Niyazov was the leader of the expedition. The expedition also included the writer and historian Sadriddin Aini, the famous orientalist A. Semenov and M. Gerasimov. Also it included a young cinematographer Malik Kayumov. These excavations were aimed to examine the human remains in the tombs and to prove that they belonged to Tamerlane and his closest relatives. Excavations began on June 16. They first opened the tombs of Ulugbek’s sons, then the tomb of Timur’s sons: Miranshah and Shahrukh. On June 18 they discovered the remains of Ulugbek, the grandson of Timur. On June 19 the heavy gravestone was taken from the Tamerlane’s tomb.

On June 20 the tomb of Tamerlane was opened and the mausoleum was filled with sharp choking odor of the mixture of resins, camphor, rose and frankincense. It should be noted that Temur died in Otrar on his way to China. Therefore to bury his body in Samarkand he had to be embalmed. Even the British and French scientists noticed that at the opening of the tombs of Egyptian pharaohs, the air was filled with a sweet scent. At first the Europeans thought that the smell was the sign of a variety of curses, but then it was proved that it was just the smell of oils used in the embalming. So in the case with Timur’s tomb we can say that the smell at the opening of the tomb was not of the curse, but of the oil for embalming.

Two days after the opening of the Timur’s tomb, on the night of June 22, Nazi Germany without declaring the war invaded the Soviet Union. Many people linked it with the opening of the tomb of Tamerlane. Samarkand people were panic-stricken. The expedition was immediately winded up, and the remains of Temur and his dynasty were sent to study in Moscow. But if you think deeply about all these events, they would seem a chain of coincidences, since the World War II began in 1939 with the attack on Poland and the "Barbarossa" plan of attack on the USSR was approved by Hitler in 1940.

However, supporters of this hypothesis say another important fact. The turning point in the war came with a victory in the Battle of Stalingrad. A month earlier Stalin ordered to return the remains of Temur and his dynasty to Samarkand and to bury them with full honors. According to the legend, an aircraft with the remains was taken over the front line for a month, which caused the excitement and the rise of Muslims who fought on the fronts of the Second World War. Many people believe that this event caused the victory in the Battle of Stalingrad, one of the most terrible and simultaneously heroic battles of the war, but in fact this battle has been won thanks to the heroism and sacrifice of soldiers who died for peace.