The Legend of Kirk Kiz

For millennia, people have made legends of fearless Amazons. Many armies fled from warlike maidens. A Kirk Kiz Girl Squad stayed in the fortress of Kirk Kiz Tepe. Enemies surrounded the walls of the fortress and began to siege the castle. Brave girls, led by their leader Gauhar defended the fortress. Countless days and nights they repulsed the enemy’s attack. Many enemies were killed on the battlefield. Detachment of girls also sustained heavy losses. Only Gauhar and some girls survived, but help did not come. They prepared to defend the city.

The fortress was burning, groans and cries were heard in flames of fire, the walls were destroyed. Girls lost any hope. But Gauhar, having collected all remaining arrows, neatly hit enemies. When the arrows ended, Gauhar, mortally wounded, left the fortress. The soldiers of the enemy became rigid. Gauhar slowly stood up, a bloody helmet fell down from her head and luxurious tresses fell down on the armor. The girl raised her sword and with said: "My name is Gauhar, my squad of girls was killed in the battle, and I call your commander to a duel". 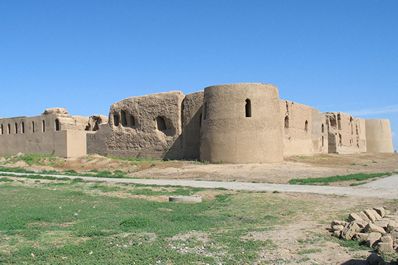 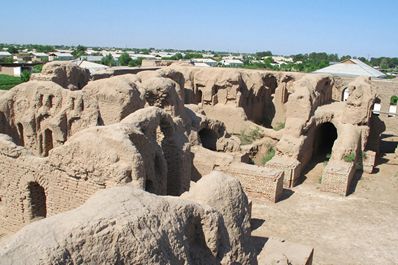 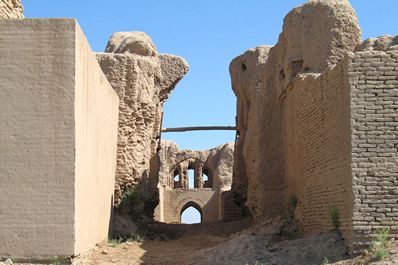 The army responded with a roar of astonishment. No one fought with this mighty army as bravely as the girl squad did. The leader threw a piercing glance at the girl and whispered: "I’d like to have such men in my army". Leaping from his horse, he politely came up to Gauhar and carefully looked into her eyes. He realized that he would not occupy Samarkand, but would find his death there. The commander bowed his head and kissed the hand of Gauhar. Then he turned to his men and shouted: "I saw the pearl of Samarkand and it’s enough for me. Back home!" The army approved it and, saddling their horses, the riders shaded from view.

Brave Gauhar followed the last enemy soldier with her eyes and a smile of joy lit up her face when they disappeared over the horizon, leaving the land of Samarkand. At that point, the riders appeared out of the fortress hurrying to aid the Amazons. Gauhar bowed her head with relief and whispered: "Finally!" and fell flat on her back. All her body was wounded. Closing her eyes she remembered her parents: how mother cooked bread and father told fairy tales, how her sister and she ran to the market for sweets and her betrothed told of his love. It flashed before misty eyes of Gauhar and looking at the steppe, gardens and the city of Samarkand, the radiant joy lit up in the depths of her eyes. "The city is saved!" - a happy inspiration flashed across her mind.