Bibi-Khanym and The Impudent Architect

The name of Bibi-Khanym Mosque is very poetic as well as a legend, related with its construction. By the legend the mosque was built by the Tamerlane's favorite wife, Bibi-Khanym, in honor of his return from a trip to India. According to her aim the mosque was planned to be the most grandiose creation of Samarkand. An architect, leading the construction of the mosque, fell madly in love with the beautiful queen, and delayed the completion of work in any possible way. Bibi Khanum was furious with the delay, as Timur had to come back very soon and the building still was not ready. When the queen asked the architect to hurry with the construction of the mosque, the architect stated a condition that the building would be ready in time, if she allowed him to kiss her. 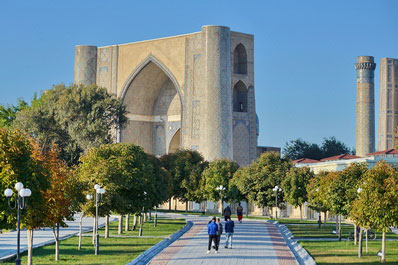 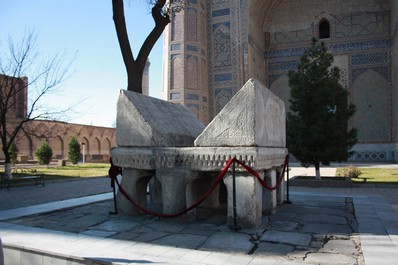 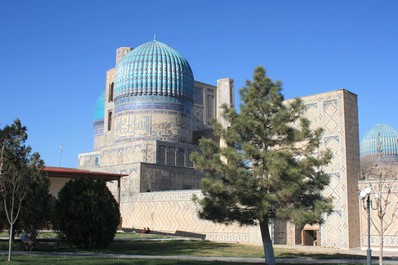 In response, the queen ordered the servant to bring eggs painted in different colors and said to the architect: "Look at these eggs. They are all different only from outside, but inside they are the same. The same about women! I can give you any of my slaves at your choice ". Then the architect asked to bring two glasses, one of them he filled with water, and the other one with white wine: "Look at these glasses. They have the same appearance. But if I drink first one, I will not feel anything, if I drink another one, it will burn me. The same about the love".

The queen had to agree with the terms of an impudent architect, but his kiss was so hot, that it left a bright trace on the tender cheek of Bibi Khanym. Timur returned from the successful trip. He was delighted with a gift of his wife: a majestic cathedral mosque which was completed on time by the architect, but he could not help noticing a trace of the kiss on the cheek of his beloved wife...

It is unknown what was happened at the end of the story. According to one popular version Tamerlane killed the architect and ordered to bury him in an underground mausoleum, where he placed his library. After Tamerlane's death the library was transferred to Ulugbek, who enlarged it, but after his death it vanished into thin air...

This legend can be compared with the real facts. Elder wife of Tamerlane, Saray Mulk Khanum, with the husband’s permission decided to build a mosque next to the bazaar. The mosque of Bibi Khanym was built at the same time with the madrassah, built by the plan of Tamerlane himself. To make the mosque more majestic than the madrassah of Tamerlane, the queen ordered architects to erect the tallest building in the city. But an error in the project caused to the gradual destruction of the building. Today, the Bibi Khanym Mosque is one of the most popular places visited by tourists. Two years ago it was partially reconstructed.