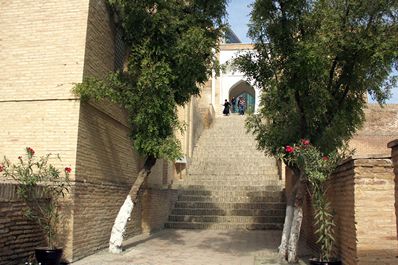 When one passes under the entrance portal of Shakhi Zinda, he finds himself in the world of legends and mysteries. The complex of Shakhi Zinda starts with stairs consisting of 40 steps, which represent the path of repentance and prayer. These stairs are cloaked in many legends and myths, which are still alive in the hearts of people. Every visitor of Shakhi Zinda, whether believer or tourist, always starts counting stairs both on the way up and way down. The legend says when the number of stairs matches on the both ways, the person can be considered free from sin. Therefore today you can see here many visitors, diligently counting stairs. But not many people know that this spiritual tradition has deeper roots.

In the Middle Ages the Mashad of Kussama was a place of pilgrimage, a kind of Central-Asian Mecca. During this period, the stairs appeared in the mausoleum. It was a symbol of the great transformation of the human spirit. Pilgrims had to recite verses from the Koran and think about God at each step of the stairs. Someone made the same way in his heart, sitting under the roof of aivan at the foot of the stairs. And only on the 40th day, the believer climbed the stairs, leading to the top mosque and the main mausoleum of the complex.

All this happened at the daytime. At night, the pilgrims were replaced by Muslim mystics, the Sufis, who sang their songs concentrated on the mentioning of Allah. Depending on the theological school, which they followed, these rites were silent or loud.

There is a legend about the 40-day prayer service held by the spiritual leader of the Naqshbandi Sufi Order Bahauddin Naqshbandi. Every day, praying for God and rising up step by step, he soon reached the upper step. At the same moment he saw a rider on a white horse, rapidly approaching him. For a moment the Sufi thought that he would be trampled to death by the horse but the rider, peering at the face of the master, suddenly stopped his horse and asked the Great Sufi about something.

Amazed pilgrims, who watched the incident from downstairs, saw that after ending the conversation the unknown rider turned his horse around and disappeared as suddenly as appeared. According to the legend, the rider was Kussama Ibn Abbas himself, who decided to test the great master at the peak of his Travel.

After that, the mausoleum had attracted much more pilgrims who performed their prayers in the night from Thursday to Friday. They chanted prayers that echoed through the ancient domes and arches.