Until recent time, there were Ming Urik hills on one of the parts of Movarounnakhr street connecting the Amir Temur Square. Hills got its name from the large apricot garden, which was laid out there.

Ming-Urik is located in the bend of Salar channel. It has united plan structure. Its area was about 35 hectares. Origin of feudal relations, location on the efficient international caravan road and stabilization of Turkic Khanate caused to the growth of the fortress into the town. In the 5th century AD Chachanap was conquered by Ephtalites. They created the great power on the territory of Central Asia. In the 6th century AD it was collapsed by Sasanides from the south and by new powerful union of tribes the Turkic Khanate from the north. Struggle of the State of Ephtalites against the Turkic Khanate caused to remove of the capital to the north to the town on the site of Ming Urik approximately in the first half of 7th century AD. 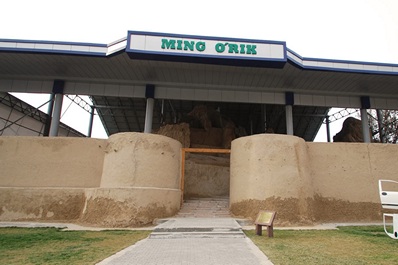 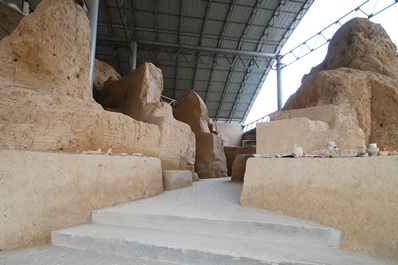 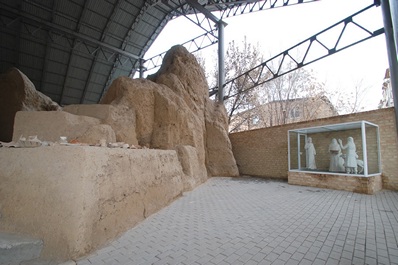 Written sources do not have enough information about structure and character of towns of Chach and its capital in 6-8th centuries. Mostly, these facts are supplemented with archeology. In early Middle Ages the junction of 4 towns and up to 20 palaces and settlements were formed in Tashkent oasis, i.e. on the territory of modern Tashkent. The capital Madinat-ash-Shash took the central place among them. This name was mentioned in Arab sources about the town, which ruins were discovered on the settlement of Ming Urik. The name Chach is transformed into Shash because of the lack of the letter “ch” in the Arab alphabet.

In 7-8th centuries the rapid town-building took place all over the region, which enabled to call the region of Chach as “the country of thousand towns” and the town of the territory of Ming Urik reached the maximum growth. It included the fortress-citadel and the town Shakhristan. The citadel was enclosed with wall of dense pahsa and raw brick and had rectangular towers of stepped form. Close to the citadel on the ruins of ancient temple of sun worship there was the official palace of rulers, that is the sign of capital status of the town. Erected on the top of the hill it dominated over the town. 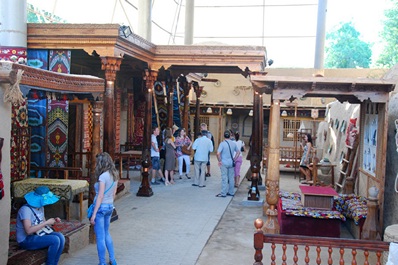 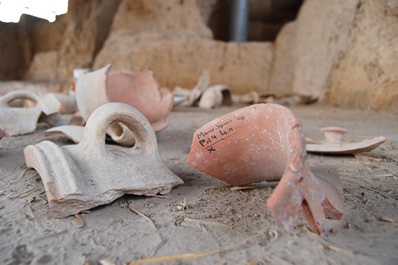 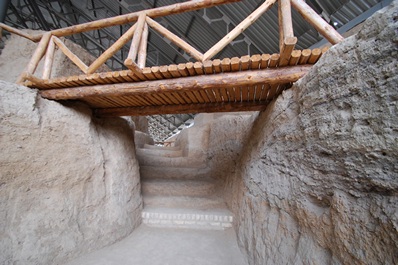 The palace consisted of a number of premises, including the ceremonial hall and wide corridors, living rooms and stores. Also archeologist discovered here the cult complex with the sanctuary of fire. Fire and later reconstructions almost entirely destroyed its interior. Only slight traces indicate that walls were decorated with multicolored paintings, which reflected lives of nobles and kings, epic stories and religious ceremonies, like those that archaeologists discovered in the settlement of Afrosiab near Samarkand. Investigation of this prestigious building on the territory of Ming Urik and other territories of Tashkent is the evidence that the oasis entered the area of Sogdian culture, which is considered in the science as the highest standard of cultural achievements of Central Asia in the pre-Arabic epoch.

The palace complex was erected on the remnants of walls and floors of the premise of previous time. As well as other palaces of Mavarounnahr, Ming Urik was located in close proximity to the citadel. Erected on the hill palace as well as the citadel was the dominant of urban formation.

Shakhristan had the dense building and the territory of about 7,5 hectares. Shakhristan included monumental houses and handicraft workshops. New coin appeared in the 7th century AD and there is the reason to connect it with the place of issue in Chach, in Ming Urik. Also traces of ceramics and metal-working were found on its territory. Ceramic finds were insignificant but quite expressive.

In addition to the pottery, researchers found iron articles, terracotta figurines and toys. The weaving also reached the high development. People of the settlement excavated gold, silver and copper near Tashkent and the Chach possession coined its money.

From the ancient time Chach and Sogd were the largest agricultural regions. These two regions had difficult relations. It was accompanied by open hostile actions, but more often it led to close trade and economic ties. During this period the political situation of Chach was stable enough. Its representatives along with ambassadors and trade visitors of other regions came to the court of Sogdiana ruler. It can be seen on the mural painting of the Palace of the 7-8th centuries in Afrasiab, where the Ambassador of Chach is depicted along with embassies from other regions. Ming Urik is considered to be the inhabitation of the legendary ruler of Turan – Afrasiab.