The small part of old Yangiyul road, from 54th passage to the bridge crossing the Jun channel, is called Chashtepe. It is named after the hill of Shashtepa, located on the left side.

People have already used to Shashtepa. It always was there. But not many of them could ever think that the depths of this hill have preserved marks of many events of long standing. The researchers of Shashtepa Hill stated that it was the remnant of a big settled point with high fortress. Modern buildings reduced its area. It consists of the citadel hill with 16 meters of height and two settlements. First settlement borders with citadel and the remnants of the second one were found on the other bank of the Jun channel. Archeologists managed to compose the description of layers, after studying centuries-years old remnants of cultural human activity. 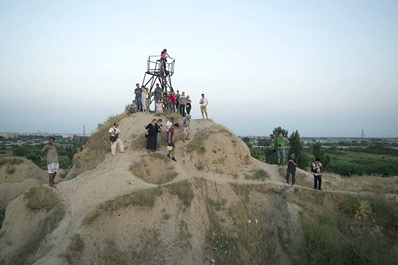 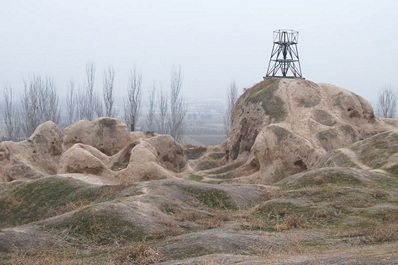 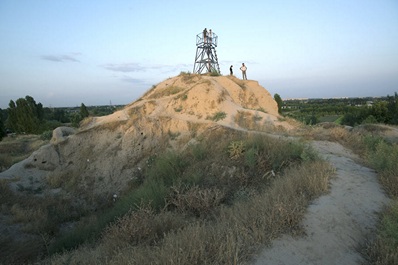 Cultural accumulations on the hills form the layer of 12 meters. The earliest cultural layer was located on the loess soil and belonged to the settlement of Burgulyuk culture, which has never been found within Tashkent earlier. The name is related with the discovery, made by the famous archeologist Aleksey Ivanovich Terenojnin, on the bank of Burgulyuksay in the Akhangaran valley. He has discovered there a few articles: implements, sickles, weapons – knives, daggers, arrowheads, clay ware.

In the result of further researches on the territory of Shash, the same items were found that led researchers to the discovery of Burgulyuk settlements on the banks of Tashkent sea. Washed-away houses of earth with ware, remnants of corns, animal bones, and house wares assured that these settlements were agricultural.

Such kind of people settled down near the Jun channel. Water surface of the channel was almost on the level of banks, which enabled to drain water for fields. These first farmers on the territory of Tashkent lived in dug-outs with framed walls and light ceiling.

Each dug-out furnished with fireplace and corn storage pits was designed for one family. People used brown ware produced by hands on the fabric mould. Vessels were painted and burned. Burgulyuk people sowed barley and soft wheat, cultivated the land by stone hoes and took in the harvest with bronze sickles. Corn was grinded into flour by stone corn-grates. People of Shashtepe settlement also were engaged in the cattle-breeding and reared cattle and pigs. They used horses, donkeys and camels in the household and farming. Burgulyuk people cast knives, sickles, arrowheads and other bronze articles in stone moulds. In addition to bronze they started to cope with iron, producing implements of it. The weaving was well-developed. People manufactured fine and coarse fabrics of wool and jute fibers. There is no information about cotton fiber production during that period. Burgulyuk people worshipped to natural forces and fertility. This society was at the stage of patriarch community relations.

The chief of Tashkent archeology team Margarita Ivanovna Filanovich says: “The significance of research works of Shashtepa for the science is that in low cultural layers we have found the Burgulyuk culture in late stage of its development. Secondly, due to persistent stratigraphy (“stratigraphy” from Greek: “strotoe”- layer, “grapho” – to write, to describe) we can observe the gradual change of cultures and see how the Burgulyuk culture under the influence of neighboring tribes was superseded by Kaunchin culture. Now there is no need to search the ancestral Kaunchin culture.”

It enabled to define time borders of the settled culture existence. Archeologists date its early stage to 9-7th centuries BC. By this time, hearths of ancient farming cultures have been already found in many parts of Central Asia. Characteristic feature was the manufacture of painted ceramics, i.e. decoration of household vessels with red geometric patterns. They were dated back to the end of second and the beginning of the first millennium BC.

In this monument archeologists have found the circular defensive wall. Built of mud bricks, alternating with a layer of pahsa, it has the width of more than four meters, the height of three meters sixty centimeters and stretches for 60 meters. Archaeologists believe that this wall has existed for a long time and was rebuilt several times. According to scientists it was built under all rules of fortification art and is the evidence that first experiences of town building on the territory of Tashkent can be related to not later than 2200 years ago.