Kaffal-Shashi. He had a key to human hearts.

Kaffal-Shashi lived more than a thousand years ago. But there is no person in modern Tashkent who would not know the honored name ‘’Hazrati Imom’’ (Holy Imam), the name that was given to him in 10th century. 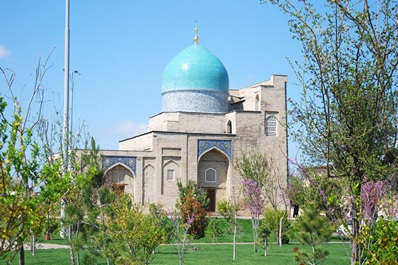 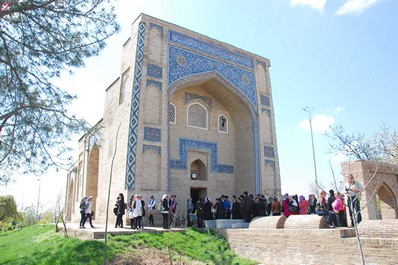 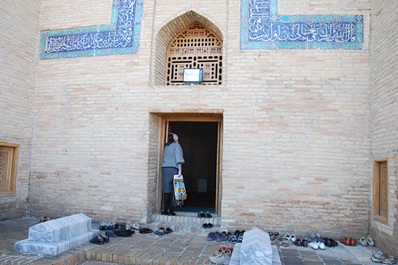 Abu Bakr Muhammad ibn Ali ibn Ismail Al-Kaffal Al-Kabir as-Shashi. Difficult name at first sight is easily explained – Abu Bakr Muhammad ‘Senior’, the son of Ali, the grandson of Ismail, locksmithfrom Tashkent.
Kaffal-Shashi, a brave poet, a polyglot, and the author of many books on Islam Law, was born in 291 according to the Hijri Calendar (903/904 AD) in Ash-Shash (present Tashkent). His father was an educated man who owned a keylock shop where Kaffal-Shashi studied secrets of this craft. Soon he mastered it, developed passion to reading and as it is still popular among the youth, began to write his first poems.

Still young, he moved to Khorasan to continue his education, and then to the capital of Caliphate and the centre of the science of the Islamic world, Baghdad. There Al-Kaffal learns from the Imam Abu Jaf’ar Muhammad ibn Jarir al-Tabari (839-923), a well-known Islamic historian and theologian of that time, the author of the book “History of the Prophets and the Kings”, tafsir (interpretation) of the Koran and works on Sharia. Al-Tabari lived 84 years and died in Baghdad when al-Kaffal was 19. It gives a clue how young Kaffal-Shashi was when he left his hometown.

Abu Bakr al-Kaffal ash-Shashi becomes one of the leading representatives of the Sharia Schools of the Shafi madhhab (stream) after spending many years at school; receives popularity for his erudition in many scientific disciplines and wins the unquestionable respect in issues of Sharia.
The entire chapter was devoted to our compatriot in the main book of his life ‘‘Wafayat al-Ayan (The Orbituaries of Eminent Men)” by an Arab writer and lawyer of the 13th century, Ibn Khallikan (1222-1282).
He writes: “Abu Bakr Muhammad ibn Ali ibn Ismail al-Shashi, a scientific theologian from the Shafi stream, was undoubtedly the distinguished scholar of Sharia of that time. Kaffal-Shashi had a deep knowledge not only in laws and traditions, dogmatic theology, but also showed himself as an excellent linguist and a wonderful poet’’.
Native to Tashkent, Abu Bakr Muhammad Kaffal Shashi was an unusual person. Perfect connoisseur of holy books and the Sharia. Polyglot, with the knowledge of many languages of the medieval East. The author of a wide range of works. However, the heyday of Islamic Renaissance gifted the world tens of scientists, hundreds of theologians and a great number of writers. Why then, thousand years later, do the professors in Boston and Toronto still read lectures on him, and cite him in Greece, Lebanon and Turkey? Kaffal Shashi entered the history as an excellent poet-polemist, who responded to Nicephore Phocas “Al-Qasida al-Arminiyya al-Maluna’’ (The Armenian Cursed Ode) – a poetical challenge of the mighty Byzantine Emperor (912-969).

Returning home after traveling the whole Muslim world, visiting holy places, talking to the most prominent persons of the Eastern Renaissance period, Al-Kaffal ash-Shashi started over to live in Tashkent, where his fame reached long before Abu Bakr’s return home.
Some sources write that there is a contribution of Abu-Bakr Kaffal Shashi in accepting Islam by Turks-Karakhanids in 970.

… The Destroyer of Delights and the Severer of Societies, the Desolator of Dwelling-Places and Garnerer of Graveyard visited the holy patron of Tashkent in August 976 when he was 72. A sage and a teacher is buried near the channel, in a shady and beautiful place where former rulers of Shash enjoyed spending time – suburban garden Bogi-Kaykaus.
Centuries passed, rulers and epochs changed each other, a mausoleum of Kaffal ash-Shashi lived through raids and earthquakes, would be destroyed and then erected again. Its modern shape the mausoleum acquired in 1541. Rulers from the dynasty of Sheybanids expressed their deep respect to the memory of the scientist that ordered to erect a mausoleum that had stood there for five centuries. The place has been visited by thousands, millions of pilgrims from all around the. Visit this holy place to pay a tribute to this great scientist and a poet who had a wonderful key to souls of people.

Works of Kaffal Shashi are printed even today. In 2007, Beirut publisher ‘’Dar al-Kutub al-Ilmiyah’’ (Lebanon) published his 616 pages book on Sharia ‘’Mahasin al-Shariah (The Beauties of the Laws)’’ that is available now on amazon.com.