The main holy place of Termez is the Mausoleum of Hakim at-Termizi, also known as Muhammad ibn `Isa at-Tirmidhi. This architectural monument was built to the north-west of the old Termez castle. Abu Abdulloh Mohammed Ibn Hasan ibn Bashir al-Hakim at-Termizi was the author of a number of religious philosophical works, a religious leader, an outstanding theorist of Islamic misticism and a prominent scholar and was the founder of the dervishes order.

"Hakimi" is considered one of the twelve sects of mysticism." He was buried near the citadel of medieval Termez, probably near to hanaqoh. Later, a mausoleum of baked brick was built above. It had one chamber with a portal dome. The dome was carried by four strong arches and supported by corbel-cell sails. The entrance was on the south side; the northern archway was open and the remaining ones were blocked off. At the end of the XI c., the interiors of the mausoleum were richly decorated with carved ganch. 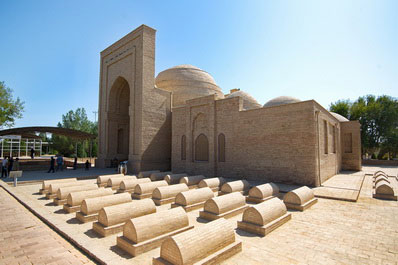 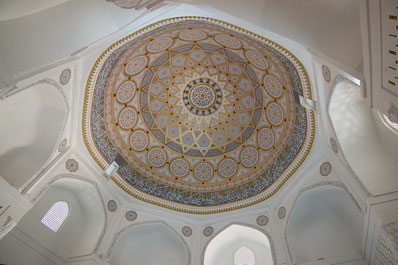 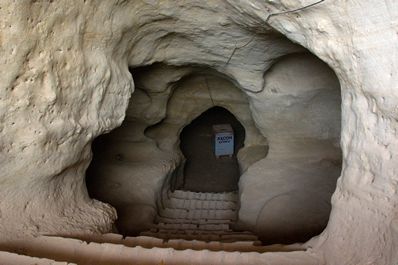 A new small mausoleum was built in 1389-1390, according to the inscription on the portal. It was situated on the east side and was adjacent to the ancient tomb. The dome of this square building supported in the corners by three-vane sails. At the end of the 14th century, when the region became part of Amir Temur’s Empire, a new mausoleum was built next to the façade of the old one, and a magnificent white marble gravestone sagana was installed over the grave of the saint. This gravestone can be considered the real masterpiece of decorative stone carving art At the beginning of XV c.