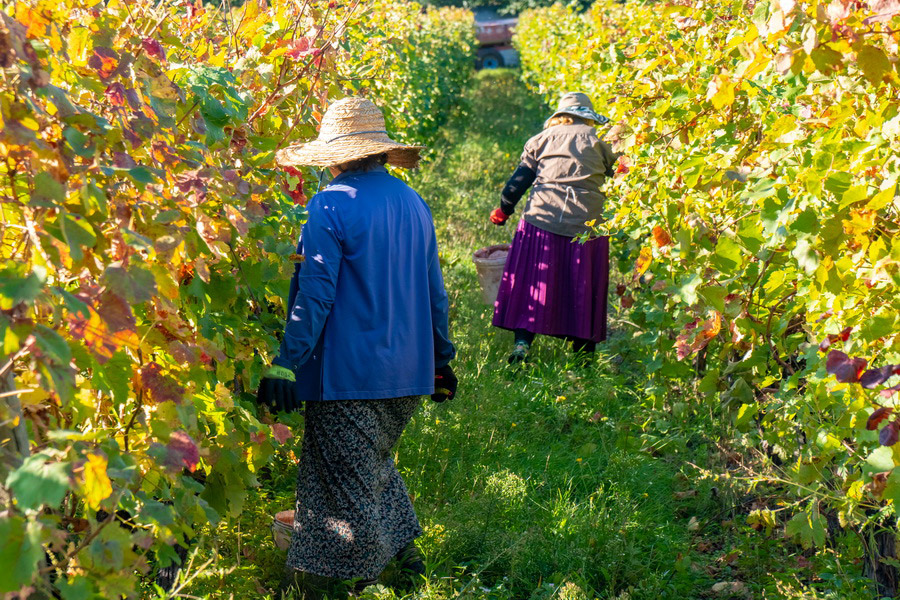 The wine making technology of Georgia in its traditional form utilizes ancient methods reminiscent of other old world wine making cultures. The use of earthen amphorae placed in the ground for fermentation is a signature feature of Georgian winemaking. While traditional methodology is used widespread for the production of authentic Georgian wines, European methods are also employed, pending on varietals and blends, their respective regions, and the desired quantity of output.

Most Georgians, throughout the country, grow or have access to their own family wine vintage on a yearly basis. This family tradition predates recorded history. Hence, techniques used in family wine making are hallmarks of Georgian wine produced by many large scale vintners as well.

Historically, the territory of Georgia was home to one of the first known winemaking cultures. Archaeological evidence of grape cultivation has been excavated at ancient burial sites in Georgia. Stone wine presses, clay jugs and metal vessels containing remnants of grape seeds attest to the fact that Georgia was one of the cradles of winemaking. 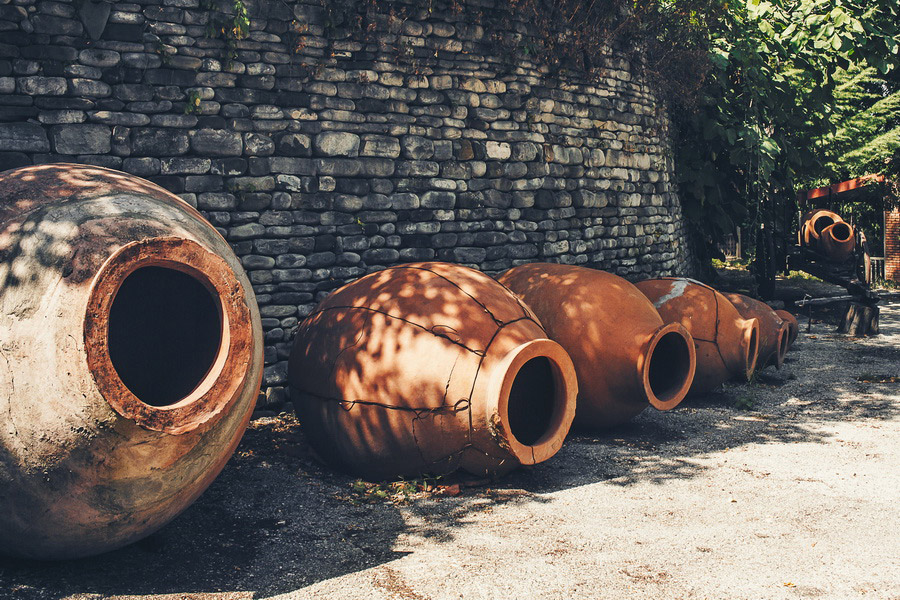 The process of grape cultivation in Georgia yielded valuable and unique varietals. People began to distinguish vine types and develop local ways of wine manufacturing which varied from one region to another. Eventually, they began blending different grapes in a process similar to Europeans.

Ancient Kakheti in eastern Georgia has historically been the centre of grape cultivation and wine manufacturing. Alazani valley is the most glorified winemaking area of Kakheti. Its unique geographic location, the Alazani River, protection from wind by the mountains of the Greater Caucasus, and the fertile soils of the valley create perfect conditions for cultivation of grapes resulting in magnificent wines. Kakhetian wines are distinguished by their original bouquet and robust palate.

The Kakhetian traditional winemaking method is as follows: 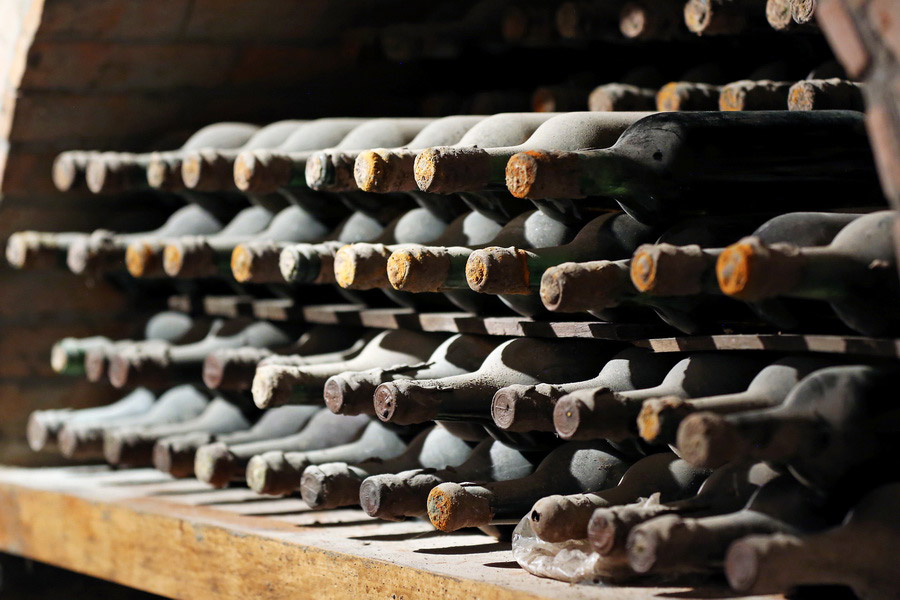 The vintage is harvested and delivered for processing to a special room called a marani (winery) and placed into a large vat called a satskhaneli which was historically made from a hollowed tree trunk. The grapes are pressed directly with feet as juice flows down along flutes into a huge clay amphora called a qvevri (also spelled kvevri) for fermentation. This is the gentlest way to obtain juicy pulp because seeds remain intact and do not release unnecessary tannins which might give the wine an excessively strong bitter taste. These jugs are dug into the earth with the hole accessible at floor level. This provides consistent temperature during fermentation. As the surface of the qvevri is rather porous, the inner walls are covered with a thin layer of natural beeswax - thus another peculiarity of Kakhetian wine making. Fermentation periods are different for red, amber and white wines. Volume varies from hundreds of liters to several tons.

The main distinction of Kakhetian winemaking is the inclusion of mezga in the fermented contents of the qvevri. Mezga is skin (enriched with tannins which contain substances associated with coloring), pulp, grape seeds and clusters. The infusion of mezga adds a unique taste, flavor and color to Kakhetian wines. In the first days of fermentation, for a better delivery of dying substances, pijaj – mixing the “cap” of mezga that comes to the surface – is conducted. Then qvevris are closed with a lid (stone or wooden), sealed hermetically by covering the lid with a layer of clay pudding applied with a special bat. A tube is installed to allow the release of carbonic acid. The contents are left to ferment until the following spring. In spring, qvevris are opened and the wine is separated from the mezga and placed into another jar. 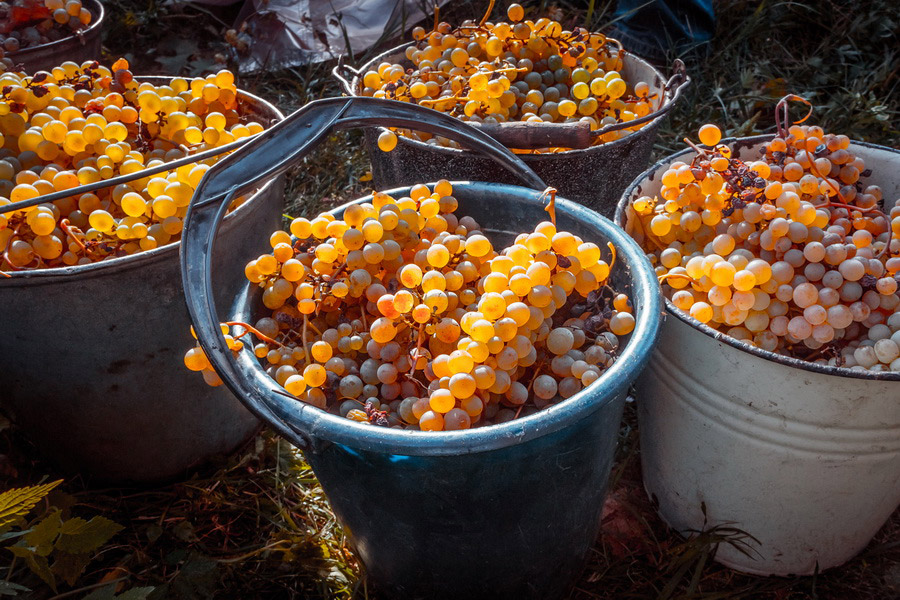 These large clay jars are narrowed at the top and resemble what are commonly known as amphorae. The massive jars have become synonymous with Georgian culture and are a symbol of Georgian identity. The image of the qvevri is found consistently in Georgian architecture and art.

The Kakhetian method of winemaking in qvevri jars was acknowledged and entered into UNESCO’s list of the Intangible Cultural Heritage of Humanity in 2013.