According to winemakers from Kakheti, the wine capital of Georgia, there are more than 500 Georgian grape varieties cultivated in the country.

Experts agree that it is difficult to trace the origins of many of these vine types, particularly after an epidemic of grape phylloxera ravaged Europe and the Caucasus in the 19th century. After being brought from America on Izabella vines, this pest proceeded to exterminate more than half of the region’s vineyards. Contaminated lands were burned to the ground and doused with chemicals, although some of the vines were salvaged by crossbreeding them with American grapevines. Many grapes were saved in this manner, but the quality of their wine was forever altered. Further widespread damage to local grapes was incurred by two world wars and repeated plagues of insects in the 1970s-1980s.

To make matters worse, Georgia and other former USSR countries suffered just as much from the reckless decisions of the communists as from the epidemics themselves. In an effort to combat widespread alcoholism, in 1985 the Soviets cut down thousands of hectares of vineyards and forced the closure of many wineries. So severe was this crackdown that many desperate winemakers were driven to suicide.

Even after the Soviet Union collapsed, it was difficult to reverse this loss, although some Georgian sorts were eventually restored thanks to the efforts of winemakers from Uzbekistan and other neighboring countries. Today both popular and rare sorts of grapes are grown in Georgia. The single most important factor in the perseveration of the vine quality, particularly in Kakheti, is the environment (micro zone) in which it is grown. 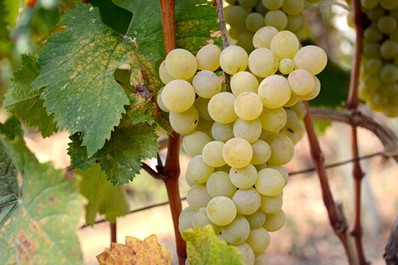 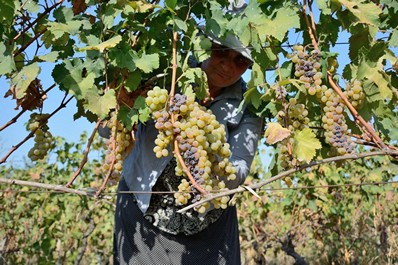 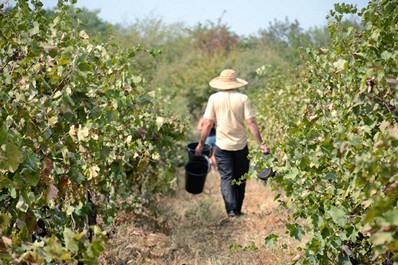 A complete list of wines made from Georgian grapes would be rather lengthy, so only the most popular ones are listed below.

Saperavi, a name which means “to color”, is by far the most popular red grape variety used in Georgian wine. While sometimes combined with other grapes, Saperavi is most commonly vinted as a singular dry red variety. This grape is a staple in Georgian red wine manufacturing.

Tavkveri is a red grape known for its flexibility. It is used to produce wines ranging from dry red to sparkling.

Mujuretuli grapes are combined with Aleksandrouli grapes to produce the deliciously sweet Kvanchkara wines for which Racha Region is known.

Usakhelauri grapes are native to western Georgia. This dark orb-shaped fruit ripens late and is revered for its “peppery” characteristic.

Chkhaveri grapes are grown along the Black Sea coast in Adjara and Guria and produce an array of rose wines, including sparkling varieties.

Ojaleshi grapes are native to Semegrelo Region. These ruby-colored berries yield semisweet and sweet wines with a red fruity bouquet and spicy undertones.

Rkhatsiteli grapes are the most predominant white variety in the country and are sometimes used to produce a Georgian amber wine. Grown in eastern Kakheti, sommeliers commonly note hints of citrus and apple in Rkhatsiteli wines.

Mtsvane Kakhuri grapes are grown throughout Georgia and are named as such because they yield wines of a greenish hue (“mtsvane” means “green” in Georgian).

Kisi grapes are native to Kakheti. This grape variety is noted for producing finer wines.

Tsolikouri grapes are an ancient variety native to Colchis (now called Imereti). These grapes are the most popular white variety in western Georgia.

Each of these vine sorts differs not only in their taste but in the size of their harvest: some sorts produce 100 tons per hectare, while others have an output of less than 3 tons per hectare. Any attempt to increase the productivity of these sorts will affect the quality of the wine, leading connoisseurs to prize rarer Kakhetian wines such as Kisi, Chinuri and Tavkveri.