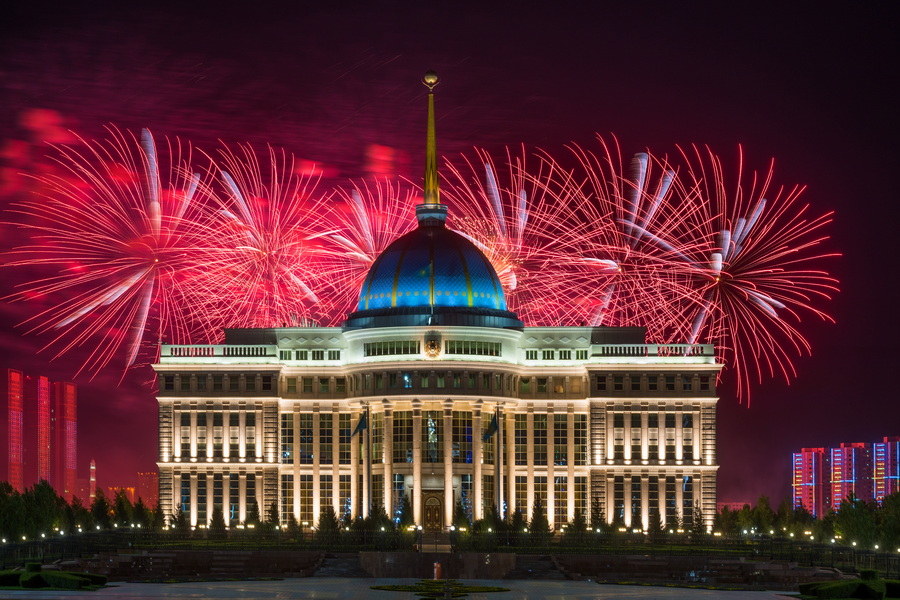 New Year has been celebrated in the territory of Kazakhstan since the mid-19th century when Russian migrants settled the region. Today it is one of the most beloved holidays in Kazakhstan, a season of glittering decorations and lavish festivities anticipated by people year-round.

New Year in Kazakhstan begins in full swing on the evening of December 31st, when cities and villages alike host open-air carnivals which culminate in midnight fireworks. No New Year celebration in Kazakhstan would be complete without Santa Claus (Ayaz Ata) and his blue-clad granddaughter Snow Girl (Qar Qiz), who roam the crowds and deliver gifts and sweets to children. Ayaz Ata is a figure from Slavic folklore who personified the winter frosts. His prototype was St. Nikolai (Santa Claus) and the lesser-known ancient divinities Zimnik and Korochun. He is usually depicted wearing a dark-blue, silver or red fur coat embroidered with ornamentation. With a long white beard and a stick in his hand, he travels by foot or a three-horse sleigh and carries his gifts in a sack slung over his shoulder.

One of the main symbols of New Year in Kazakhstan is the festively decorated New Year tree, the equivalent of the western Christmas tree. Another central feature of the Kazakh New Year is a mouthwatering feast around which close family and friends gather to await the coming of the new year. After bidding goodbye to the Old Year by recalling happy memories and highlights, everyone enjoys special holiday dishes as they await the final countdown to the New Year. Shortly before midnight, the president delivers a congratulatory speech to the people of Kazakhstan. At the stroke of twelve people exchange wishes for success and happiness with one another amid toasts of champagne, the traditional New Year drink. The Kazakh people love a good celebration, and their New Year feasting and merriment will often continue until the early morning hours.

Although Kazakhstan New Year traditions typically center around family gatherings, some residents of Kazakhstan’s larger cities now prefer to spend New Year's Eve at special events held in restaurants, bars and nightclubs. Considered one of the most significant non-religious holidays in Kazakhstan, January 1 and 2 are public, non-working holidays in Kazakhstan.

New Year     People meet the New Year at midnight on 31st of December with a feast, surrounded by friends and family.
Kazakhstan
Kazakhstan