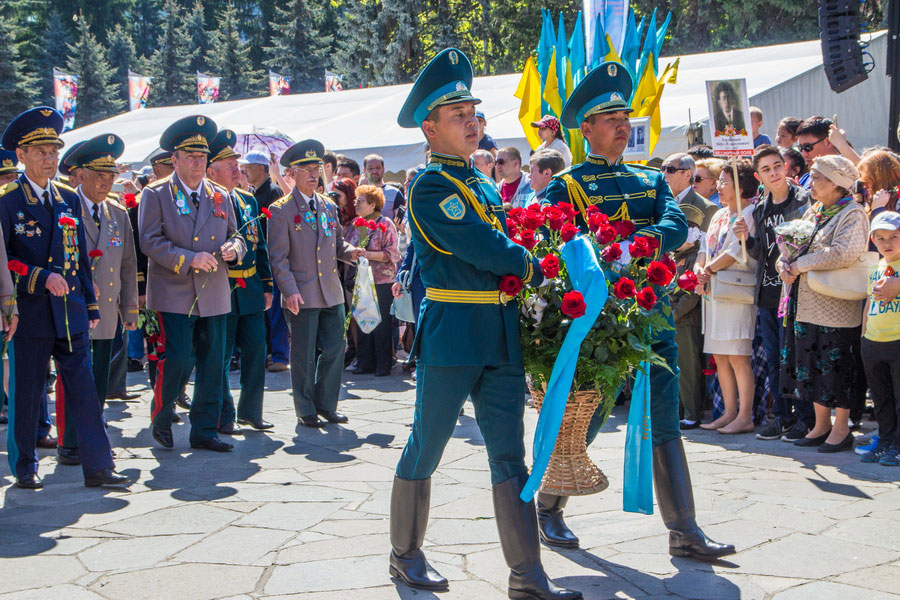 Victory Day, which commemorates the Allied victory over Nazi Germany in World War II, is a day of reverent celebration in many countries, and Kazakhstan is no exception.

Victory Day in Kazakhstan is celebrated on the 9th of May, for on this day in 1945, at 1 am Moscow time, the Germans officially signed their surrender. The holiday was celebrated for the first time that same year, when Moscow organized a Victory Parade in Red Square. Ever since then, solemn military parades and marches are held each year on May 9th in nearly every city in the post-Soviet world.

Each year in Kazakhstan, military units and school groups march along the city streets as they slowly make their way to memorial parks and monuments dedicated to perished soldiers, where flowers in abundance are laid on the tombs of war heroes. Kazakhs hold this day in high regard, for untold numbers of Kazakh soldiers died during World War II as they served to defend their countrymen and homeland from the enemy.

Victory Day in Kazakhstan is officially observed on May 9th and 10th. On May 9th, many of the country’s educational and cultural institutions hold special events dedicated to the memory of the war heroes, and official talks are organized with war veterans so that the new generations will not forget their history. Charity events are held throughout the month, and to this day the government continues to provide regular assistance to all World War II veterans.

Victory Day   People of Kazakhstan pay a great attention to this holiday since this date symbolizes the protection of the Motherland and people from enemies.
Kazakhstan
Kazakhstan