The Epic of Manas in Kyrgyzstan 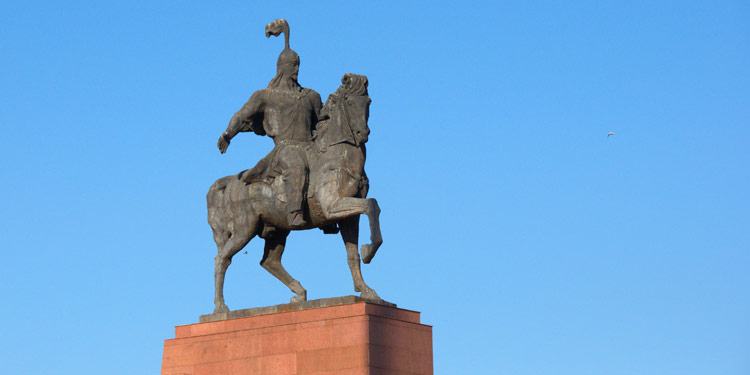 The Epic of Manas in Kyrgyzstan is perhaps the most famous part of Kyrgyz culture, and is (arguably) the longest epic poem in the world. At 20 times longer than the Odyssey, this epic tells the life of Manas, an epic warrior, and his son and grandson. The original tale was passed orally from performer to performer, who were known as manaschi. The tale was written down starting in the 1800s, and the first complete version was published in the 1920s. The Epic of Manas has since been translated into many different languages, and published in the Soviet Union and abroad.

The poem starts with Manas, a warrior reputedly born in Talas Region. His efforts to unite warring tribes and create a homeland for his people form the center of the tale. Kanykei, his wise and noble wife from Samarkand, and Bakai, his counsellor, are also main parts of the tale. The second and third parts of the tale follow Semetei, his son, and Seitek, his grandson, in their battles.

There is a mausoleum in Talas that supposedly holds the remains of Manas. During renovations in 1969, the skeleton of a man was found inside, though the inscription on the outside says that the mausoleum is for a woman. In the Epic of Manas, his wife Kanykei and counsellor Bakai decide to bury Manas in a tomb with somebody else’s name on the front, well aware of the practice of the time of destroying all records of one’s foes. Putting another name on the tomb would ensure that it would survive Manas’s enemies.

No matter if Manas was an actual person or not, his influence on modern Kyrgyzstan has been immense. The flag features 40 rays of sun, which represent the 40 tribes that Manas united as the first Kyrgyz state. There are landmarks across Kyrgyzstan named after Manas, from Manas International Airport to Manas Prospect to Kyrgyz-Turkish Manas University, all in Bishkek. Manas Peak, at 4,482 m (14,704 ft) is the highest peak in the Talas Range, and 3349 Manas is a minor planet discovered by a Soviet astronomer in 1979.

Statues of Manas can be found across the country. There is a statue of Manas on his magical horse, slaying a dragon, in front of Philharmonia in Bishkek. Surrounding the statue are busts of Kanykei and Bakai, as well as some of the most famous manaschi. Bokonbaev, Toktogul and Togolok Moldo, some of the most famous, all have streets in Bishkek named after them. Next to the official flagpole on Ala-Too Square is another statue of Manas, cementing his position as the main figure of Kyrgyz statehood.