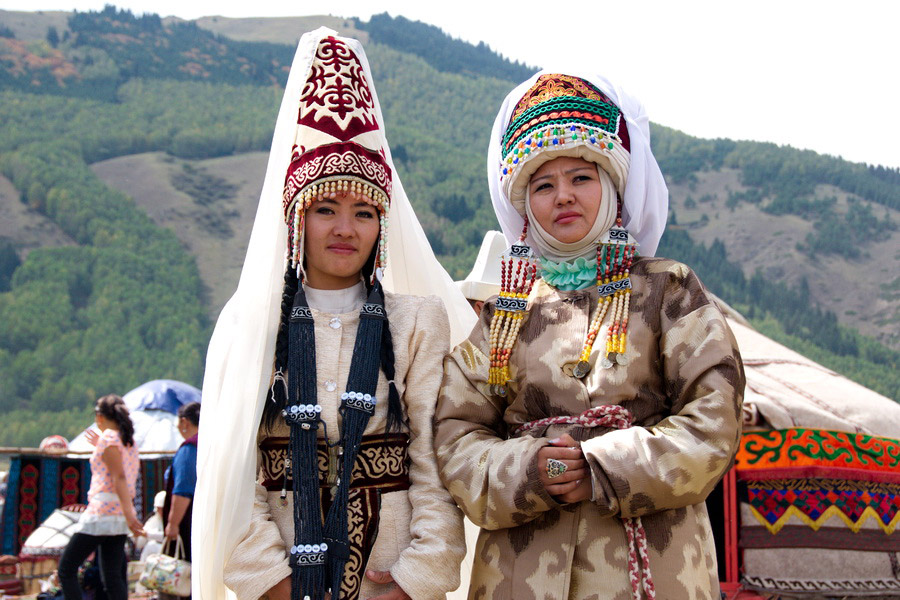 Kyrgyzstan culture is heavily influenced by the traditions from nomadic life. Kyrgyz culture features influences from Russia, Persia, and Turkey, but yet remains something entirely unique. Nature influences are prominent, from the designs to the music, and many traditions reflect the fact that nomads lived closely with nature. Perhaps the most well known aspect of Kyrgyz culture is the Epic of Manas, an incredibly long poem passed down orally for generations.

As nomads, the Kyrgyz people always lived closely with nature. From their housing to their clothing, everything was designed to adapt to changing weather and locations. Yurts are easy to take apart and carry, and can be made warmer for winter, and cooler for summer. The textiles inside of yurts, such as shyrdaks and tush kyiz (felt rugs and embroidered hangings), take their inspiration from designs found in nature, such as plants, animals, and landscapes. Even clothing was made out of natural materials, and designed to be comfortable while still stylish.

Horses were, and still are, central to Kyrgyzstan culture. They provided not only transportation, but played crucial roles in wars and even cuisine. Kumis, or kymyz, is made from mare’s milk, and some traditional dishes feature horse meat. Horses traditionally played roles in courtship and marriage ceremonies, and could be used as payment or as dowries. Some instruments were even designed so that they could be played on horseback, and the beat of hooves can be heard in traditional Kyrgyz music.

It’s no surprise then that horsemanship is valued in Kyrgyz culture. Sports are ways to develop both riders and horses, and to make both better prepared for hunting and battle. Competitions testing dogs and birds of prey on their speed and accuracy found the best hunters, who would be essential in the winter.

Many of these elements can still be found today, though Kyrgyzstan is also still a modern country. People are proud of the culture in Kyrgyzstan, and events are held to make sure that it is kept alive and promoted. Visitors can expect to be immersed in these nomadic and traditional elements, especially if they stay with a host family.

The Epic of Manas in Kyrgyzstan

The Epic of Manas is perhaps the most famous part of Kyrgyz culture, and is (arguably) the longest epic poem in the world. At 20 times longer than the Odyssey, this epic tells the life of Manas, an epic warrior, and his son and grandson. The original tale was passed orally from performer to performer, who were known as manaschi. The tale was written down starting in the 1800s, and the first complete version was published in the 1920s. The Epic of Manas has since been translated into many different languages, and published in the Soviet Union and abroad. 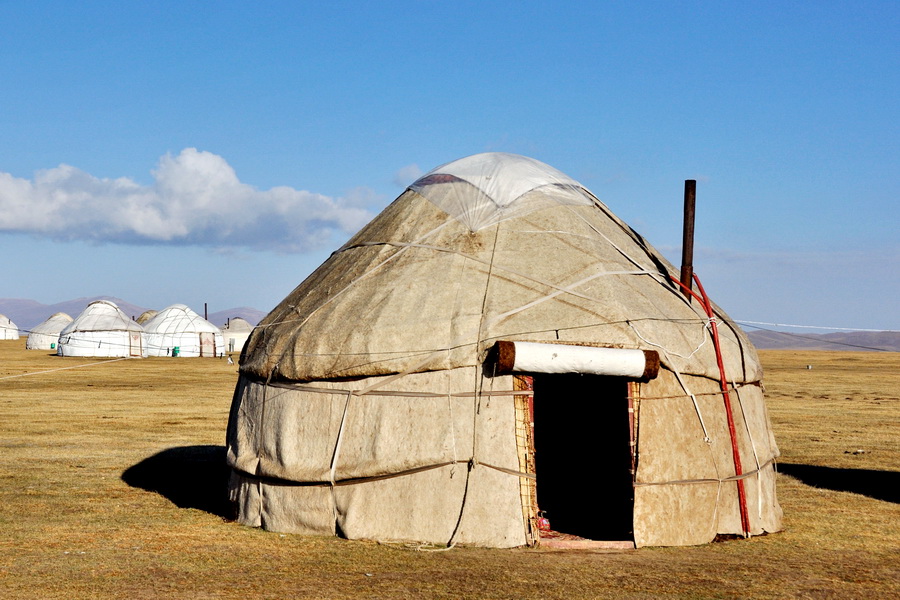 Yurts are one of the most essential parts of Kyrgyz culture, and are more than just houses. They represent the family, the earth, and the universe, and cover everything from birth to death. Yurts hold much of Kyrgyz culture, from important rituals and ceremonies, to craftsmanship and traditional artistry.

Kyrgyz yurts are made of a cupola birch poles tied to a latticework that forms the vertical walls. The outside is made of felt and wool, which is water repellent and warm, and can be easily patched as needed. The top of the yurt is a wooden circle, called a tunduk, which forms one of the most essential symbols of family and the universe. 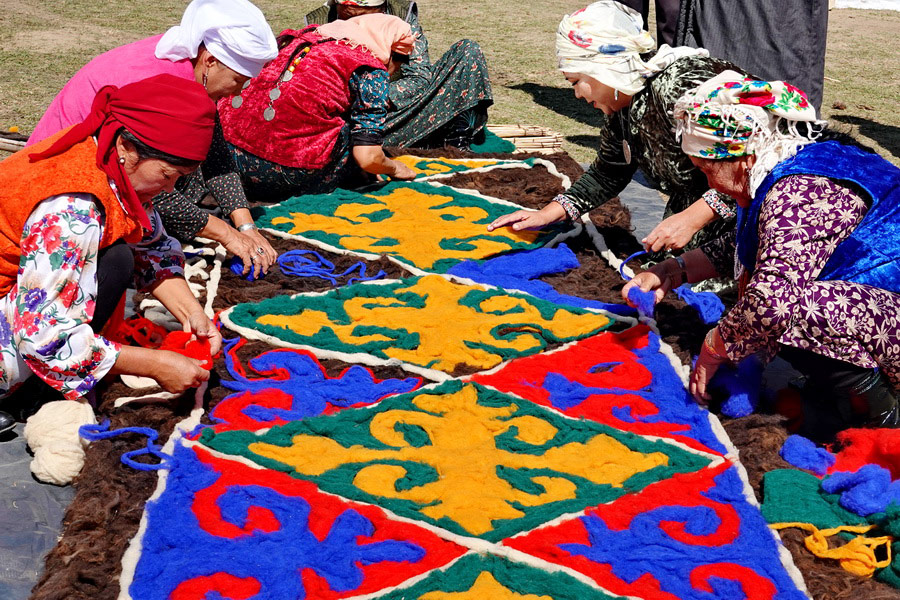 Kyrgyz textiles feature mostly designs from nature, and materials that were easily found in the mountains and their surroundings. Felt and wool are common materials, as are reeds and embroidery thread. Most of the motifs and designs reflect the mountains, rivers, plants, and animals that live in Kyrgyzstan. 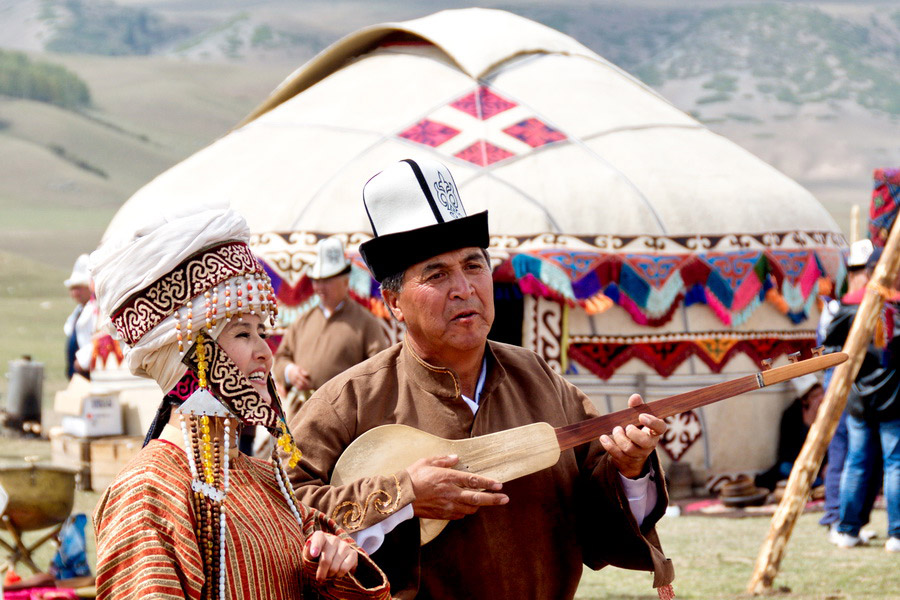 Kyrgyz music is most famous for how evocative it is of nature and life in the mountains. Many songs have lyrics about the nomadic lifestyle, but even without words, the music reflects the sounds and feelings of not only the landscape, but of the experiences essential to living there. There are a variety of instruments in Kyrgyzstan, all of which can be played in ensembles or separately.

Though Kyrgyzstan might not be known as a center for performing arts, there are actually a number of famous writers and performers from the region. There is a thriving arts scene in Kyrgyzstan, with theaters and arts schools around the country. Students can study dance, performance, music and filmmaking, and there are performance spaces that regularly host productions.

The State Kyrgyz Opera and Ballet Theater was founded in 1926 as a training theater. The current building was built in 1955, and still holds regular performances to this day. 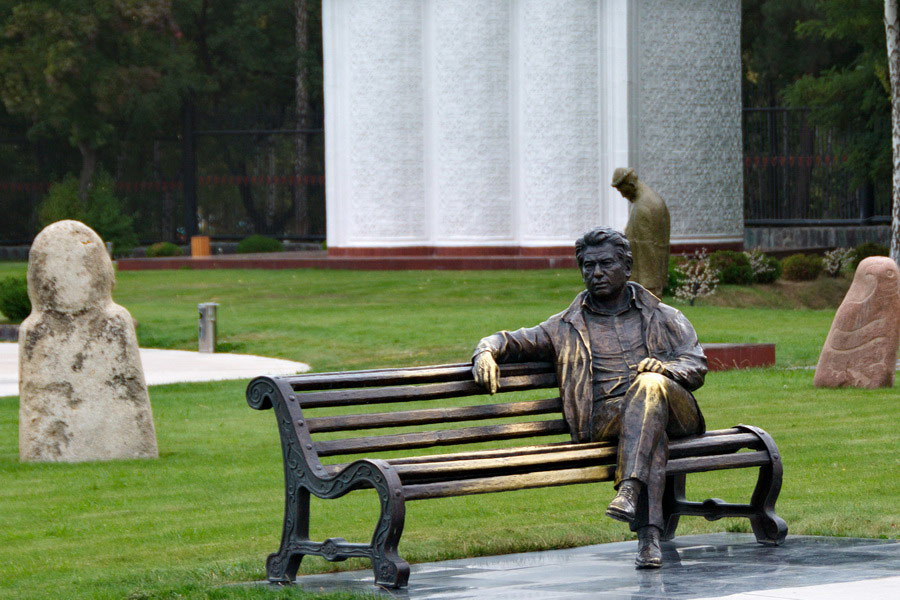 Kyrgyzstan's literature extends across centuries, though it wasn't always written down. Since very little of the population was literate until relatively recently, many poets (known as akyns) traveled from village to village performing their works. Some works, like the Epic of Manas, were memorized and passed down orally between generations of performers, known as manaschi. Literacy increased under the Soviet Union, when schooling became more common, and not just part of a religious education. Starting in the 20th century, writers, poets, and linguists flourished, producing excellent works that became famous around the world. 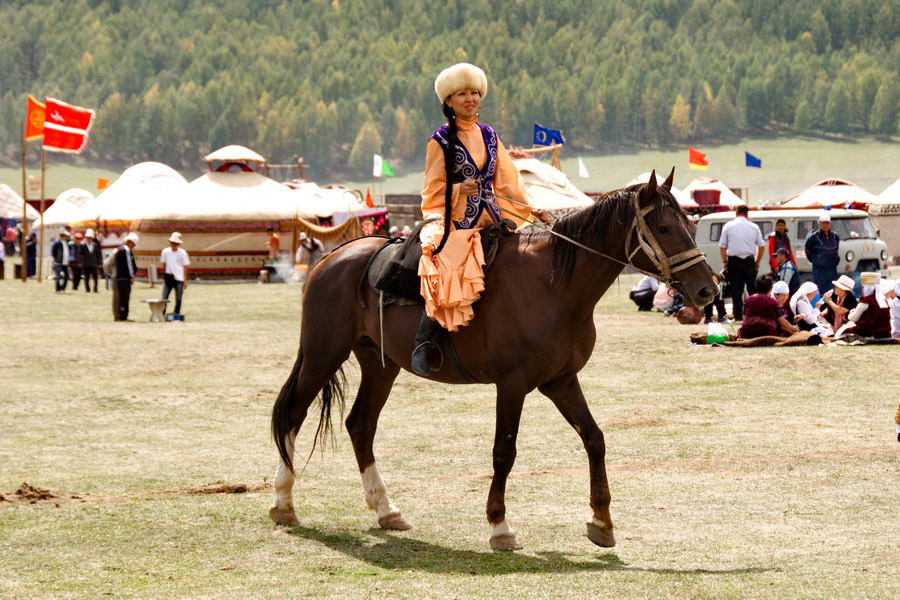 Horses are essential to the nomadic lifestyle, and life in the mountains and on the steppes would be impossible without them. Horses were used for everything from transportation to war, from payment to companionship. Mare’s milk is an part of Kyrgyz cuisine, and meat and leather can also be important products. Tourists can easily find Kyrgyz souvenirs related to horses, such as intricate horse whips or antique saddles. 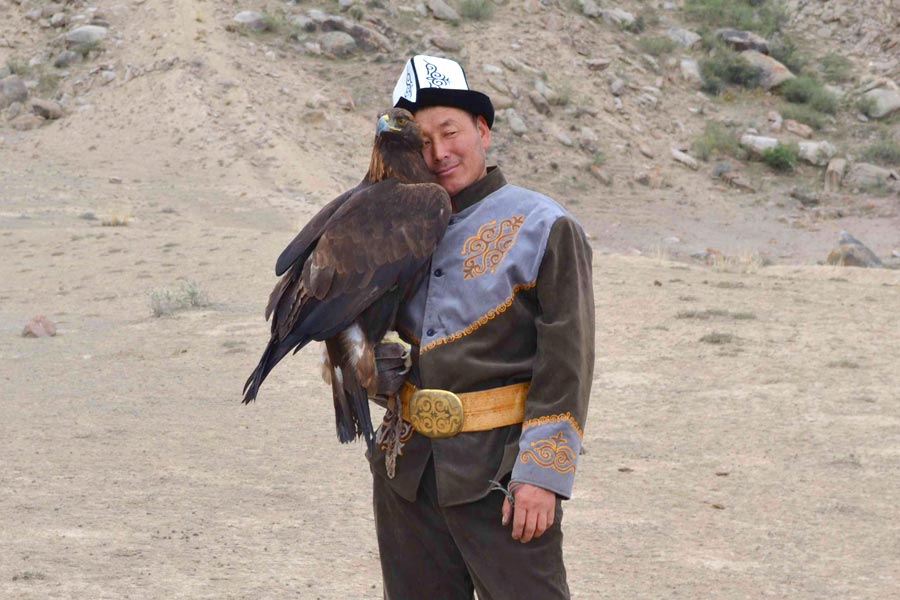 Hunting with the golden eagle is an ancient tradition that dates back to the Mongol conquest of Central Asia around the 12th and 13th centuries, when a fine eagle and good horse cost the same price and both lent prestige to their owner. 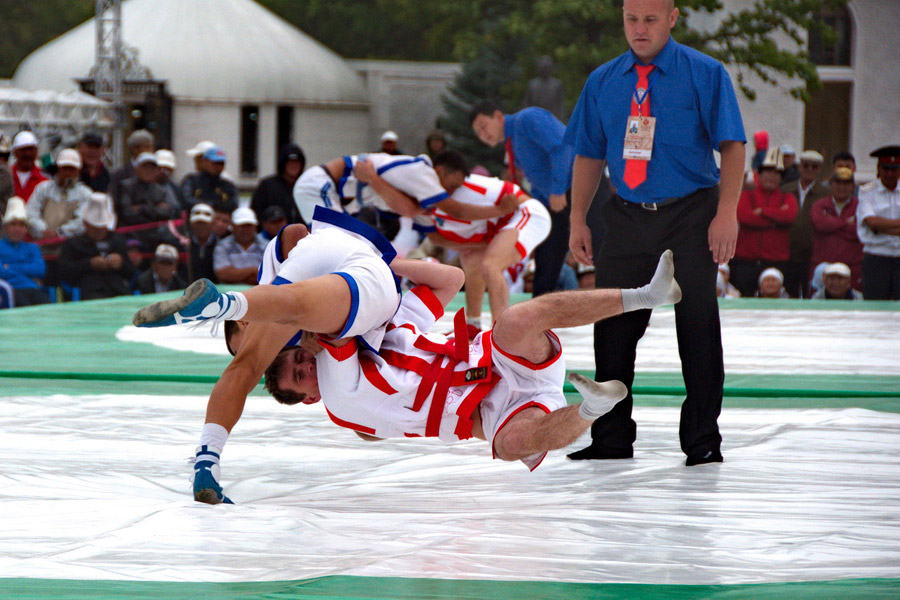 Sports in Kyrgyzstan are more than just recreation; they’re training for life. People needed to be strong and resourceful to survive in the mountains and steppes, and sports helped them gain the strength and skills necessary. Sports also reflect the traditions and values of the Kyrgyz people, and helped them pass on their culture from one generation to another. 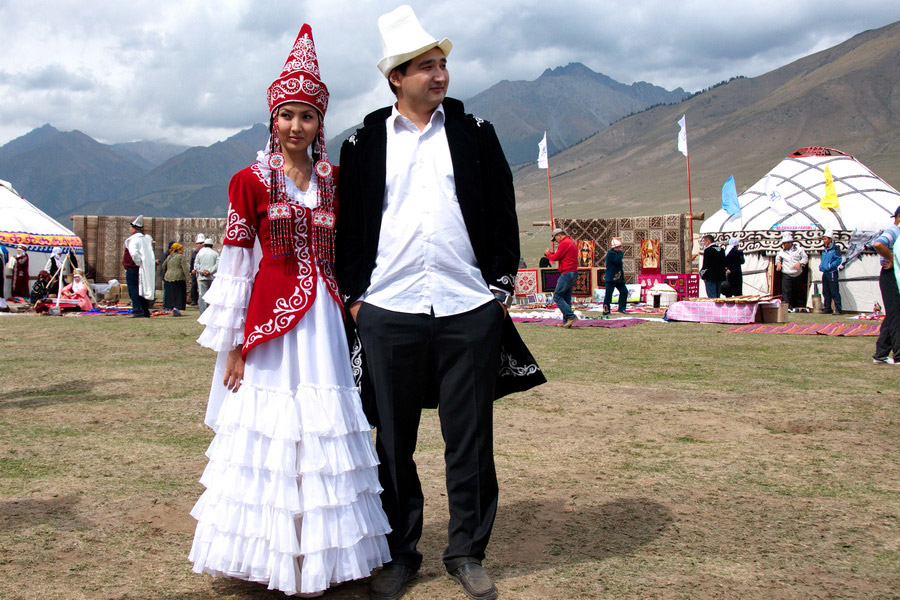 Kyrgyz clothing reflects the lifestyle and regions of Kyrgyzstan, with designs and materials drawn from nomadic life. Wool, felt, leather, skins, and coarse cloth are the main materials used for Kyrgyz clothing, with ornamentation taken from tribal traditions and nature. Even though many people wear Western clothing, traditional elements are still visible everywhere, and people are proud of their traditional clothing in Kyrgyzstan. 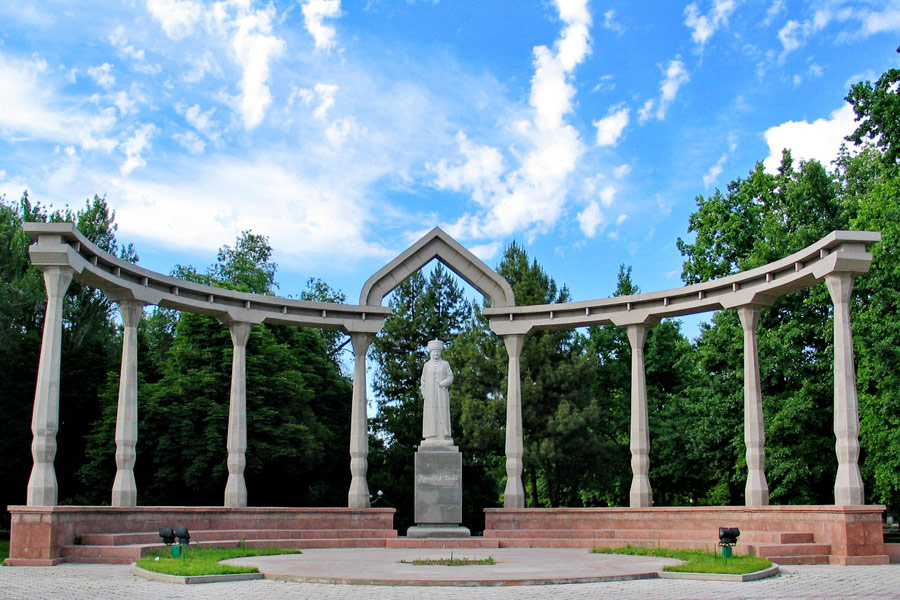 Some monuments and memorials in Kyrgyzstan remain from Soviet times, while others have only appeared since independence. New statues of Manas and older statues of Lenin dot the country, while monuments to other notable figures (such as Chingiz Aitmatov, Toktogul Satylganov, and Przewalski) can also be found. In Bishkek, there are also monuments to those who died in the Second World War (at Victory Square), and a Memorial to Those Who Died for Freedom (commemorating those killed in the 2010 revolution). Ata-Beyit, close to Bishkek, is a memorial complex located near a mass grave where political prisoners had been executed, and serves as a memorial to those who died during the political purges.

Though museums in Kyrgyzstan may not be the most famous nor the highlight of a trip, they are still important and informative. The State Historical Museum and the Museum of Fine Arts in Bishkek are two of the largest and most famous museums in Kyrgyzstan, but a trip to Bishkek would be incomplete without visiting the Frunze House Museum, where visitors can enter his perfectly preserved house. The Osh State Historical and Archaeological Museum showcases the only UNESCO World Heritage Site completely in Kyrgyzstan, while the Przewalski House Museum in Karakol is a tribute to the famous explorer, one of the first to map the area. Next to Burana Tower is an archaeological museum, where visitors can learn more about the ancient history of Kyrgyzstan.