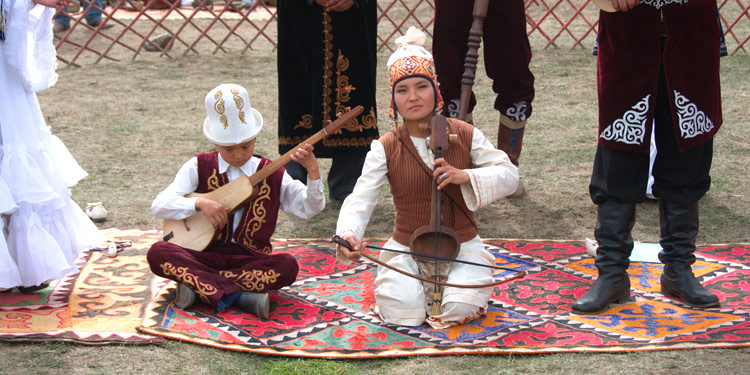 Kyrgyz music is most famous for how evocative it is of nature and life in the mountains. Many songs have lyrics about the nomadic lifestyle, but even without words, the music reflects the sounds and feelings of not only the landscape, but of the experiences essential to living there. There are a variety of instruments in Kyrgyzstan, all of which can be played in ensembles or separately.

The most iconic is the komuz, a three-stringed instrument reminiscent of a guitar, though it is slightly smaller. There some lyrical songs for the komuz, but there are also lots of songs that are percussive and remind the listener of riding a horse. Playing the komuz can also involve intricate strumming and flourishes that lift the instrument to an unequaled level of showmanship. Master komuzchu can play their instrument with it behind their back, on their head, and upside down. Some songs tell stories, play tricks, make jokes, or describe a landscape. The World Nomad Games featured 1000 komuzchu playing Mash Botoi, one of the most famous pieces for komuz.

The kyl kyyak is a vertical bowed string instrument, with two strings, usually made from apricot wood. With strings and a bow made of horsehair, plus a horse’s head carved on the end, this instrument clearly came from the horse culture prevalent in Central Asia (it could even be played on horseback). The kyl kyyak and other Central Asian bowed instruments may have the first bowed instruments in the world, and spread along trade routes to become the erhu in China, the rebab in the Middle East, the esraj in India, and the violin in Europe. 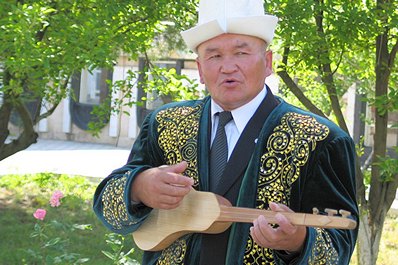 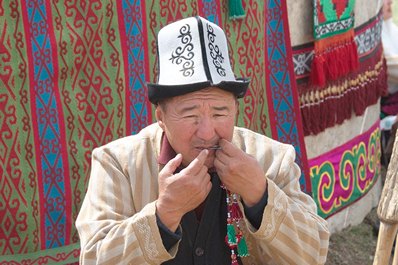 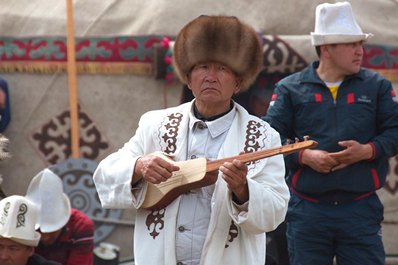 The temir komuz, or jaw harp, is another popular instrument in Kyrgyzstan. Though the jaw harp is found across the Turkic world, it is unusually popular in Kyrgyzstan, and musicians can reach virtuosic levels. The chopo-choor is another wind instrument, similar to an ocarina that sits comfortably in the hand, and has three to six holes to control the pitch. Various percussion instruments were also used, such as drums.

Songs and poems were improvised by traveling musicians, called akyns. Different from manaschi, who only performed the Epic of Manas, akyns traveled from village to village writing their own poems and performing them with music for crowds. Toktogul Satylganov was a famous manashi and akyn who lived in Kyrgyzstan when it was part of the Russian Empire. He was wrongly accused of participating in a revolt against Russian power, and was sentenced to jail in Siberia. He managed to escape and walk back to Kyrgyzstan, and has since become one of the most recognized musicians.