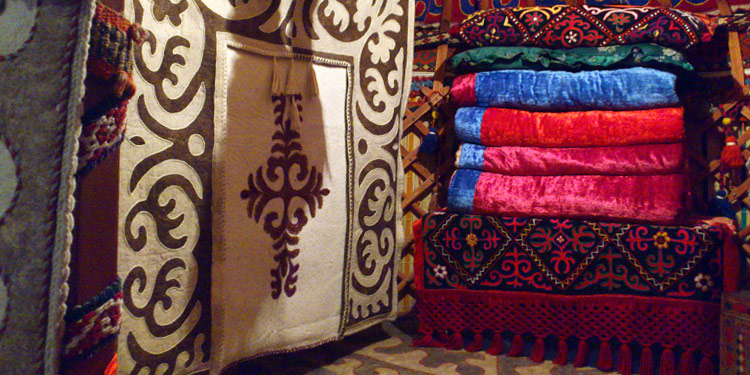 In Central Asian culture, the venerated craft of carpet weaving stretches back for centuries. In Kyrgyzstan, this well-honed art form stands in a category all its own, with a slew of customs surrounding the production of unique felt Kyrgyz carpets.

Carpet weaving in Kyrgyzstan developed as a near exclusive means of meeting the aesthetic needs of Central Asia’s historically nomadic livestock farmers. Generations of Kyrgyz weavers have contributed their vision and talent to the creation of Kyrgyz felt rugs and other carpet varieties, which today are in great demand.

The allure of Kyrgyz carpets stems from their superior quality, achieved through the use of durable materials and subtle weaving techniques, and from the colorful folk art charm displayed through each product.

Kyrgyz carpet weaving traditions are reflective of the people’s nomadic ancestry, for the rugs were of great significance to the Kyrgyz and other regional itinerant peoples. It was nearly impossible to create a comfortable home environment in their harsh and ever-changing surroundings, but the carpets helped to transform their sparsely furnished yurts (tents) into a cozy dwelling which offered protection from the cold. 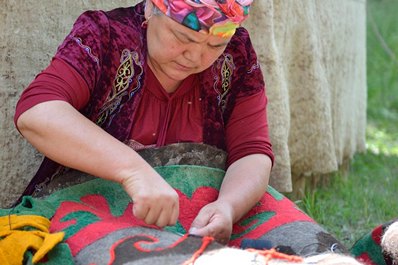 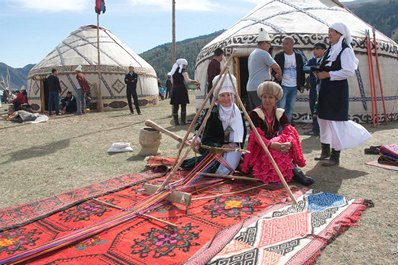 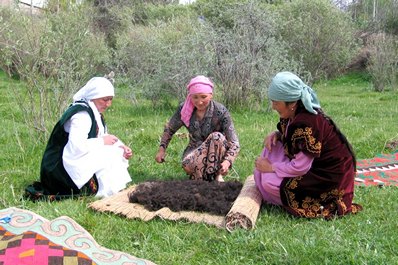 The carpets would serve as furniture, as fixtures to link different sections of the yurt together and as interior décor. The exterior of the yurt would be draped with large carpets and the threshold covered with a small, narrow rug. The dirt floor of the yurt would then be covered with soft, warm koshmas (a type of felt carpet) and other rugs. Special carpet carryalls were used to transport all of the items.

For Central Asia’s livestock farmers, carpets were also essential for a girl’s dowry. Traditionally, the bride’s family would be responsible for providing portable furnishings for the inside of the new in-laws’ yurt, and mothers were expected to present at least three carpets for their daughter to use in the new home. In Kyrgyz and other Central Asian cultures, the most skillful woman from the bride’s family would be placed in charge of weaving the carpets before the wedding day.

Carpets were not only popular among the nomadic people of Central Asia, however. Wooden furniture was not popular in the East at that time, and many families living in urban environments would also adorn their floors and walls with various carpet items.

In the 19th century, the production of Kyrgyz carpets began to evolve from small family affairs into a commercial enterprise. Today, the popularity of Kyrgyz carpets is increasing worldwide, with the tush kiyiz, shyrdak, kurak, chiy, ala-kiyiz and piled rugs in the greatest demand.