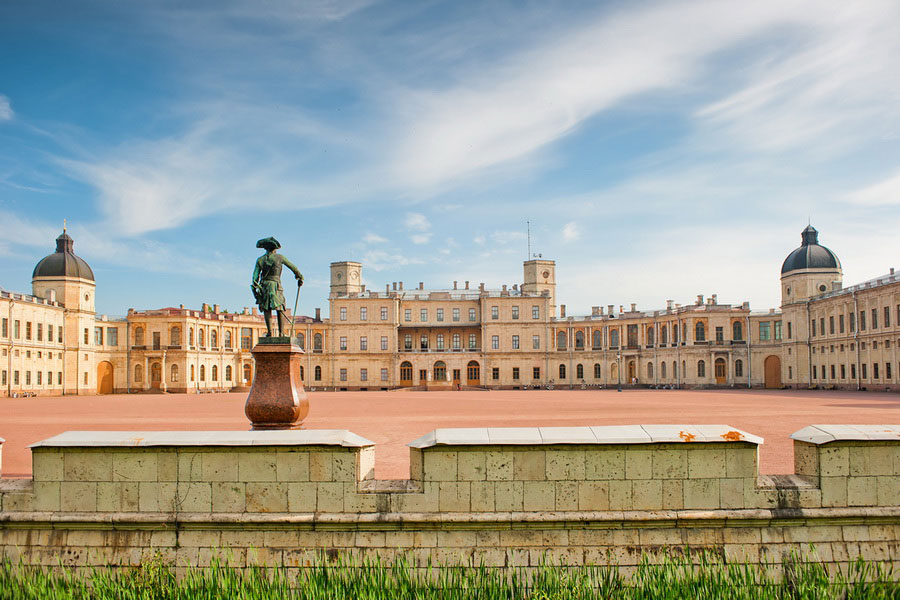 Gatchina is the famous suburb of St. Petersburg, where the Romanov dynasty founded their royal residence. The history of Gatchina started in the beginning of the 18th century when the czar Peter I ordered to build a mansion there and then gave it to his beloved sister, Natalia. After the death of the Princess the mansion repeatedly passed from one owner to another until in 1765 it was acquired by the Empress Catherine II with the purpose of giving it to her favorite Grigory Orlov. The Count started extensive construction works in Gatchina: he invited the prominent Italian architect Antonio Rinaldi. After the death of the Count Orlov Gatchina became the residence of Paul I. Paul settled in Gatchina for 18 years. In 1796 Paul became Russian Emperor and granted Gatchina the status of the city and its own emblem. From 1801 to 1828 the palace belonged to the widow of Paul I, Maria Fyodorovna; then until 1855 the palace was owned by Nicholas I; the next owners of the palace were Alexander II, Alexander III and Nicholas II. In 1918 a museum was opened in Gatchina Palace. During the Great Patriotic War the palace and park complex Gatchina suffered very serious damage. Gatchina Palace and parks were severely destroyed, many park structures and facilities were completely ruined. Immediately after the war ended the restoration activities were started which are even now under way. Step by step the unique Gatchina complex is obtaining its former splendor.

Gatchina Palace history began in the 17th century with a small hunting house, which was intended for nobility on their hunting trips. The area is very good foe hunting: thick pine forests and crystal clear lakes. And amidst all this beauty on the high bank of Silver Lake the architect Antonio Rinaldi invited by the Count Orlov in 1766 started the Palace, which became the heart of the architecture and park ensemble of Gatchina. The construction was finished only fifteen years later, in 1781.

Rinaldi’s Palace was built as a hunting castle with towers and an underground passage. Very special are Gatchina Palace facades finished with natural stone. The next owner of Gatchina , Paul I, turned the mansion into a kind of military camp.

The palace, rebuilt by the architect Brenna, changed both inside and outside, and resembled a fortress. New rooms and hall replaced the old ones; they were redesigned for different purposes. The interior changed beyond recognition. The meadow in front of the palace turned into a parade ground surrounded by a fortification with embrasures for cannons and the water-filled moat. Its final appearance Gatchina Palace complex received in 1845. In 1851 in front of the palace right on the parade ground the bronze monument to the Emperor was installed.

Gatchina Palace’s amazing feature is that it can change the color of the facades. They seem to be golden in the bright sunlight and on cloudy days they become cold grey.

And, of course, the beautiful parks around the palace: the Palace, Sylvia, Prior’s and Menagerie. The palace and park ensembles of Gatchina are among the most sophisticated creations in the world of landscape design.