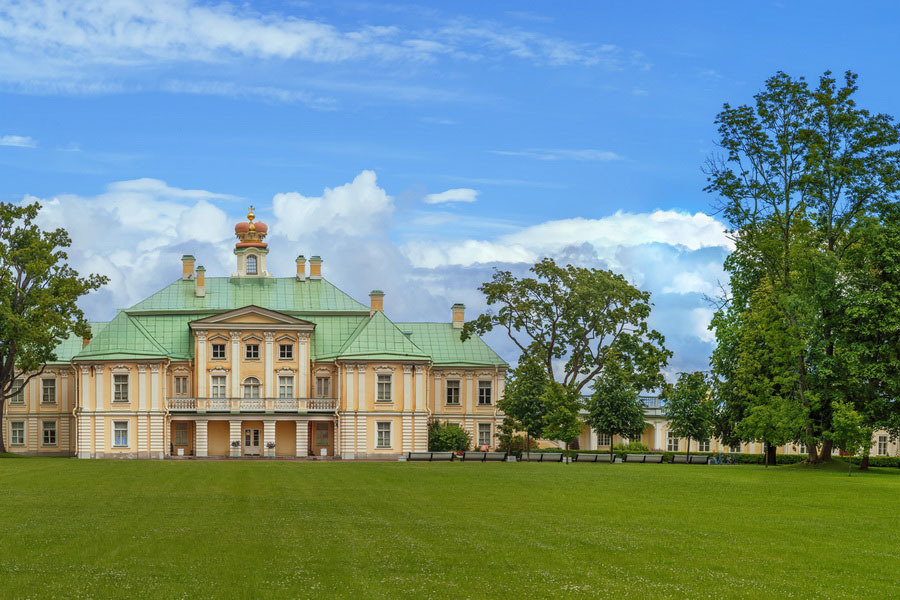 Located 40 km from Saint-Petersburg is another wonderful suburb of the Northern Capital, the town of Lomonosov, the former name of which sounds like Oranienbaum. There's the museum-reserve with the architectural masterpieces of the 18th century. The development of those picturesque lands on the banks of the Gulf of Finland started by another associate of Peter I, Alexander Danilovich Menshikov, who decided to build his summer residence there. As a result the Grand Palace was erected, whose brilliance overshadowed even the palace of Peter I being built at the same time in Peterhof. Next to it the beautiful Lower Garden was planted. In 1727, Prince Menshikov fell into royal disgrace and was sent to exile. All his property, including Oranienbaum, was transferred to the Treasury. In 1743 the Empress Elizabeth Petrovna gave Oranienbaum to her son, the future Emperor Peter III. The new owner built Petershtadt complex in Oranienbaum, which comprised a powerful fortress and a palace.

Another phase of construction in Oranienbaum began with the enthronement of Peter III’s wife, Catherine II. The Empress turned Oranienbaum into her summer residence and built there a picturesque palace which she called «Private Cottage».

The main feature of the palaces and parks of Oranienbaum is that they were not exposed to the destruction caused by the Second World War as most of the suburbs of Saint Petersburg, Gatchina, Pavlovsk, Tsarskoe Selo. Therefore, all the buildings there have survived in their original condition.
Today the palace and park complex includes several groups: the Grand Palace and the Lower Gardens, Petershtadt with the palace of Peter III and Peter’s Park, the Private Cottage with its main buildings - the Chinese Palace and the Katalnaya Gorka Pavilion.Oranienbaum is still considered one of the most beautiful suburban garden complexes of St. Petersburg. In 1948 the city was named after the prominent Russian scientist Mikhail Lomonosov, because his stained glass production laboratory was situated there.

The Grand Palace was built by the first owner of Oranienbaum, Prince Menshikov, in 1710-1727. In size and decor it had no equals in St. Petersburg and its suburbs. The palace’s name «Grand» is justified by its huge size. Monumentality of the building is added by its position on the hill. This creates the impression that the Palace hovers over the shore. From the facade the terraces descend to the sea. Adjacent to the sides of the main two-storey palace building are the one-level wings, which end in two tall pavilions, the Church and the Oriental. The pavilions are linked to Freylinsky and Kitchen wings. Peter III altered the palace interiors. The Oriental pavilion got the new name, Japanese, because of the new collection of 200 items of Japanese and Chinese porcelain.

The outstanding example of landscape art is the Lower Garden. It is part of the Grand Palace complex. In the middle of the Lower Garden the flower parterres surrounding the rows of lime trees, maples and firs were created. Besides, it is known for its fruit trees (apple, cherry, etc.). The garden was also decorated with fountains and sculptures.

Emperor Peter III built Petershadt Citadel and the Palace of Peter III in Oranienbaum. Their construction lasted from 1762 to 1774. The fortress, which, alas, has not survived used to be a very powerful structure strengthened by bastions, towers, lift bridges and surrounded by moat of water. The reason for its fragility was that most buildings in it were wooden. All that remained of the fortress is Petershtadt, the stone Gate of Honor. The stone two-story palace of Peter III has been preserved in almost original condition. The palace of Peter III has a very unusual layout. It is a small pavilion of almost cubic shape crowned by a balustrade. The palace is a square, one of the corners of which is cut in a smooth arc. It is this part of the building - a smooth transition from one side of the building to another - plays the role of the main facade. The ground floor was intended for servants and had no artistic decorations, but the upper floor is distinguished by its elegance and magnificence. The rooms are decorated with lacquer paintings and fine carvings. In this palace Peter III abdicated the throne in 1762.

This small but surprisingly comfortable and nice corner of nature was established in 1830s. The composition basis of Peter’s Park is the Lower and Upper ponds. The waterfalls made of granite steps and scattered granite boulders as well as romantic arched bridges across the river Karost give the park special attractiveness.

Territorially the Upper Park is divided into two parts - the eastern part is occupied by Petershtadt and the western – by the «Private Cottage». The modern look of the Upper Park is the same as it was in the middle of the 19th century.The bridges organically blending with its landscape as well as decorative architecture add special charm to the park.

In 1749-1751 a small Rasterlli-designed two-storey palace crowned by a balustrade and a tall roof was erected. In front of the hall there is a pond crossed by two stone bridges with granite pedestals and iron railings. In 1808 the building of the concert hall was given to the military hospital.

The main buildings of «Private Cottage» are the Chinese Palace and Katalnaya Gorka Pavilion as well as the Chinese Kitchen. The Chinese Palace, created by Antonio Rinaldi by the order of Catherine II, became a real wonder of that epoch. The people used to call it a «wonder full of miracles». The palace was decorated with paintings, sculptures and decorative art pieces. The walls are decorated with golden molding, covered with silk and embroidered with jewelry. The current Katalnaya Gorka Pavilion is a small three-storey building. Although little has left from the former luxury (earlier the pavilion was decorated with columns, sculptures and vases), its interior decoration is still amazes visitors by its splendor. The interior is finished with paintings, sculptures, molding, gilding and artificial marble. Decorative finish of the 18th century has been preserved in its original condition.

It is not easy to imagine the purpose of this small single-storey pavilion with the mezzanine floor crowned by a wide flat dome. That's because it was repeatedly rebuilt. Originally, this was Freylinsky pavilion of the Chinese courtyard built by Rinaldi in Baroque style. In 1852-53 the pavilion was renovated and got the new name - Chinese Kitchen.