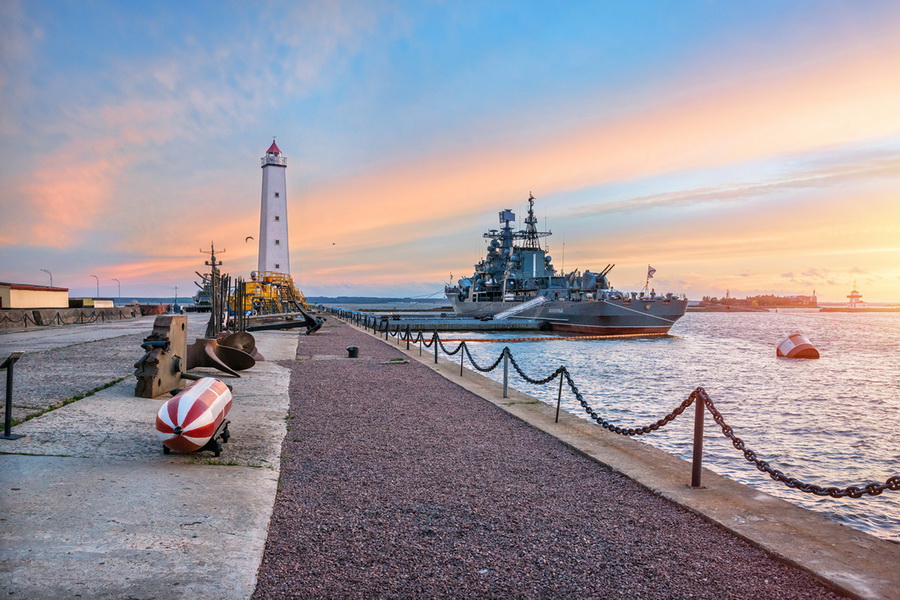 Kronstadt in St. Petersburg Region, a port city on Russia’s Kotlin Island near the Gulf of Finland, is one of the area’s most mysterious destinations.

A fortress was established on the island on May 18, 1704 and was called Kronshlot, meaning "Crown Castle". By decree of Peter I, artillery was brought to the island and the Tsar himself participated in the placement of troops. According to the king’s plan, Kronstadt was to develop alongside St. Petersburg, and thus straight, wide boulevards, which crisscross the land and converge to create large intersections, still define the island today.

Many new fortifications sprang up around the island and on nearby sandbars, and together the Kronstadt fortresses became an insurmountable obstacle on the sea route to St. Petersburg. The Imperial Russian Navy was formed on Kronstadt, whose layout was effectively a system of defensive structures which blocked the channel and the mouth of the Neva River from enemy invasion.

In 1913, construction of St. Nicholas Cathedral was completed at the highest point on Kotlin Island. Built with endowments from the sailors over the course of 11 years, the architect honored the special request of the sailors that the gilded dome be visible from far away in order to serve as a guide for approaching ships. The cathedral remains one of Russia’s most amazing churches, rivaling not only St. Petersburg architecture but chapels throughout all of Russia.

Dedicated to those who perished in the line of duty and those who contributed to the development of the fleet, the cathedral was consecrated in 1913 in the presence of Emperor Nicholas II. Unfortunately, by 1930, its bells and crosses had been removed, the gilding stripped from the domes and the murals painted over with secular substitutes. For the next 70 years of communist rule, the building would be used for various utility needs. Today St. Nicholas Cathedral, also known as Kronstadt Naval Cathedral, again functions as a house of worship, with its new marble paneling serving as a memory of the island’s sailors.

Kronstadt Cathedral resembles the Hagia Sophia in Istanbul, with an interior striking in its height, spaciousness and grandeur. Its domed ceiling measures 27 meters in diameter and its large, round windows resemble the portholes of a ship. The stained-glass windows, a striking 52 square meters each, were the largest examples of stained-glass art in Russia when built in the early 20th century. The decor delicately combines Orthodox symbols with elements of marine life.

Every hour, cathedral attendants conduct a tour as they inform visitors about the church and its history. The highlight of the tour is climbing the bell tower, from which guests can view a newly cast bell, admire the beauty of the bay and enjoy a panoramic view of the cathedral square, including the huge anchor mosaic which serves as the plaza’s main attraction.

The main attractions of Kronstadt Island, however, are its fortresses, whose impenetrability deterred the enemy for years and gave the Russian Empire a strong advantage over its foes.

The construction of the first forts began during the 17th-18th century reign of Peter I and continued until the October Revolution in 1917. Each of the forts has its own name or number, with many named after Russian emperors, statesmen and engineers. Seventeen of the forts stand directly along the sea on artificial islands, while three more are on the shores of the Gulf of Finland.

The forts formed three lines of defense on Kronstadt. The most remote forts, Totleben and Obruchev, formed the first line. They were built on artificial islands roughly 10 kilometers from the mainland on the eve of the First World War. The second line of defense were the forts of Constantine and the numerical forts, which consisted of three southern and seven northern garrisons. In the third line were old fortifications used mainly for storing ammunition and equipment. Most of the forts are no longer used, and some are now dilapidated due to unfavorable weather conditions and the climate of St. Petersburg Region.

Thanks to these forts, which form the shape of a horseshoe across Kotlin Island, Kronstadt became the largest naval fortress in the region. At the Kronstadt History Museum you can clearly trace the location of the fortifications on a map and learn their background stories in greater detail.

Kronstadt holds a special allure, for until 1996 the island was closed to the public due to its military status. Today, anyone can now visit the island and enjoy the unusual atmosphere of this city of sailors.

The city is connected to St. Petersburg by a complex of protective dams, the construction of which was started in 1979 to protect the city from floods. The structure runs for over 25 kilometers and includes 11 protective dams which can contain the rise of water in the Gulf of Finland for up to 5 meters. A motorway connecting St. Petersburg with Kotlin Island runs along these dams and offers excellent views of the bay and the numerous Kronstadt forts, particularly from the special viewing platforms installed at regular intervals along the highway.

Although cruise ships to Kronstadt from St. Petersburg no longer operate, boat tours are regularly organized in summer and are divided into two types: Guided walking tours, which allow you to disembark, and sightseeing tours, from which you can view the forts from the boat. Keep in mind, however, that even if you choose to disembark, not all forts can be explored, as some of them are still occupied by the military while others are in disrepair. Tourists are typically shown the Kroshlot, Peter I and Alexander I Fortresses, in addition to several numerical forts.

Kronstadt in St. Petersburg is a memorable day trip for visitors, an excursion filled with eye-opening history and unique sites.