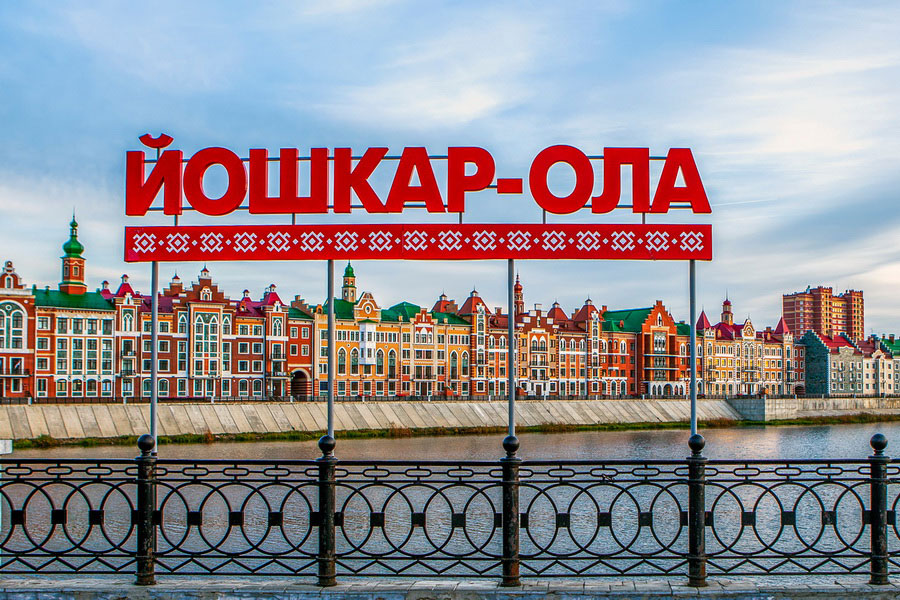 Tours, Attractions and Things To Do in Yoshkar-Ola

Yoshkar-Ola, Russia is the capital of the Mari El Republic and the only city in Russia that begins with the letter “Y”. The region is sometimes called "Europe in the Heart of Russia" due to its many buildings which mimic the architecture of famous cities.

Yoshkar-Ola, whose name means “Red City” in the Mari language, is located on the Malaya Kokshaga River along two key embankments, Bruges and Amsterdam.

By decree of Ivan the Terrible, the city was founded in 1584 as a military fortress after the conquered peoples of the Kazan Khanate refused to submit to the new regime. The fortress served as the headquarters for locally stationed troops who were charged with maintaining order in the land. Thanks to the peace maintained in the region and the large number of artisans and merchants who were then serving in the military, the fortress steadily grew. The settlement became known as "Tsarev on Kokshaga" and was later named Tsarevokokshaisk.

Due to steady economic development and the natural concentration of the local population around the fortress, settlements began to spring up around it. Farmers cultivated the land, merchants established trade relations with other cities in Russia and artisans and architects beautified the city. For centuries, Tsarevokokshaysk continued to assert control over regional insurrectionists and to serve as a launching post for military campaigns sent to expand the borders of tsarist Russia.

18th-century Yoshkar-Ola was marked by industrial development and the construction of the first stone houses in the area, which began to replace the city’s primarily wooden structures. Despite such progress, by the dawn of the 20th century Yoshkar-Ola was still little more than a provincial town: it had few streets or buildings and its budget was derived almost exclusively from agricultural revenues.

After the Russian Revolution of 1917, the Communists renamed the city Krasnokokshaysk. In 1928, in accordance with Mari national identity, it was given the name Yoshkar-Ola and appointed capital of the Mari Autonomous Soviet Socialist Republic.

During World War II, several large factories were evacuated to Yoshkar-Ola, a decision which served as the catalyst for the city's major industrial development. The new factories in turn provided countless jobs that helped to establish Yoshkar-Ola as a largely successful and independent city during 20th-century Soviet rule.

Today, the city is best known as the political and cultural capital for Russia’s minority Finno-Ugric Mari people, where the dissolution of the Soviet Union precipitated a resurgence in Mari culture, religion and language. Yoshkar-Ola had a population of roughly 290 thousand inhabitants as of 2020 and was one of the few cities in the region where population growth and dynamic development continued to advance.

Visitors will be pleased to know that Yoshkar-Ola’s rich compilation of cultural and historical attractions are largely void of the crowds that Russia’s larger cities attract.

A great place to begin your city tour is the History of Yoshkar-Ola Museum, located in an old house which once belonged to a merchant by the name of Chulkov. Its nearly 24 thousand exhibits explore the region’s history and rural life. For a more mystifying experience, continue to the House of Merchant Pchelin, which is known for its secret rooms and underground passageways.

Teleport yourself to Moscow at Square of the Republic and the Blessed Virgin Mary, where Annunciation Tower, which is a copy of the Kremlin's Spasskaya Tower, gives the impression that you really are in the capital. The square is also home to other jewels of Yoshkar-Ola architecture, including Annunciation Cathedral, Italian Park, Sculpture of the Virgin Mary with the Christ Child and the largest fountain in the city, which is guarded by a towering sculpture of the Archangel Gabriel.

When the chilly Yoshkar-Ola weather permits, take a walk from Republic Square along Chavaina Boulevard, the longest pedestrian street in Yoshkar-Ola which is named after the first Mari author and playwright. Continue your stroll through gorgeous Patriarch's Square, best known for its entertaining Clock 12 Apostles Monument.

No visit to Yoshkar-Ola would be complete without a visit with the bronze Yoshkin Cat, the most beloved personality in the city. Although the statue was only unveiled in 2011, it represents an ancient character from Slavic mythology. Rumor has it that if you sit next to Yoshkin and voice a secret wish, it is bound to come true.