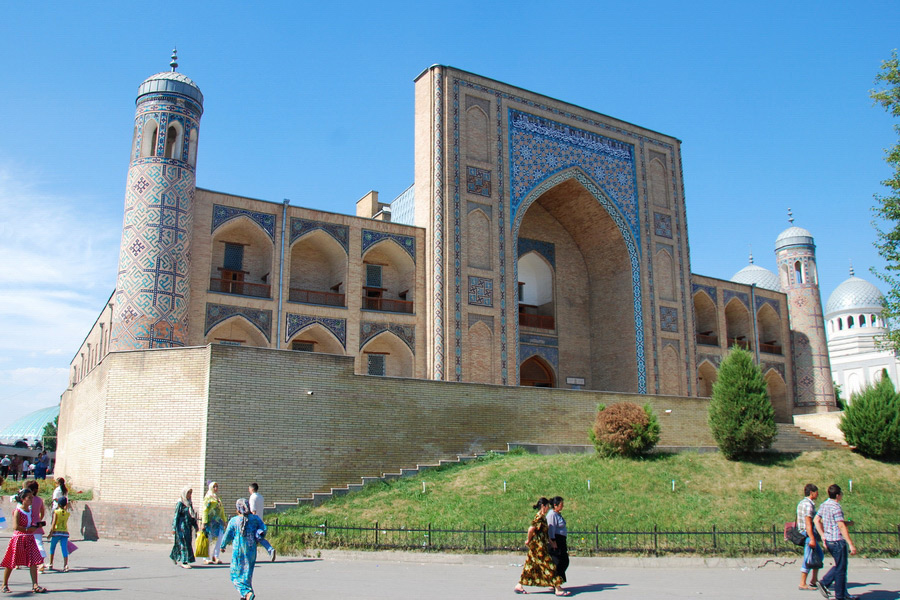 Kukeldash Madrasah in Tashkent, located near the famous Chorsu Bazaar in Old City, is one of the most famous historical sites in Uzbekistan’s capital.

Tashkent’s Kukeldash Madrasah was built under the Shaybanid Dynasty by the vizier Dervish Khan in 1570. Due to his close relationship with the ruler, the khan was better known by his nickname "Kukeldash", meaning “the khan's milk brother”, and thus the madrasah built by him came to be known as Kukeldash. The finished structure, rich in décor and replete with sky-blue majolica, rivaled the finest architecture of Samarkand and Bukhara.

The madrasah formed a part of Tashkent’s main city square, then called the Registan, and was originally intended as a religious educational institution. Yet throughout the course of its history, Kukeldash Madrasah was repurposed, abandoned and rebuilt numerous times. In the 17th century, the madrassah was used as a caravanserai for travelling merchants, and in the ensuing years the two towers which crowned the entrance portal collapsed due to neglect.

In the 19th century, the madrasah suffered further damage when it was used as a haven for the Kokand Khans during civil riots and enemy invasions. Public executions were even carried out at Kukeldash until the mid-19th century, as women suspected of adultery would be covered in a bag and thrown from the high entrance portal onto the cobblestone street below. Continued misuse of Kukledash, along with several 19th-century earthquakes and economic hardships, left the madrasah in a state of disrepair. Ensuing restoration efforts managed to salvage the building yet left little of its original appearance intact.

Under Soviet rule in the mid-20th century, Kukeldash Madrasah was used for atheistic museum exhibitions, an ironic contrast to the beautiful oriental walls of the ancient institution. In the late Soviet era the madrassah hosted the Museum of National Instruments of Uzbekistan, yet it was only after Uzbekistan gained independence that due attention was paid to full-scale restoration of the historic Tashkent Registan, including Kukeldash Madrasah. 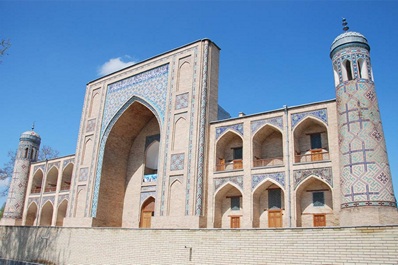 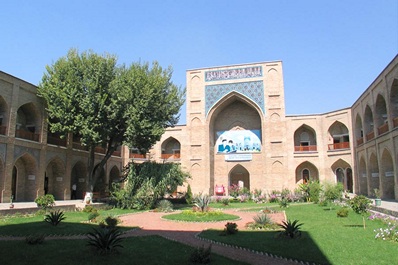 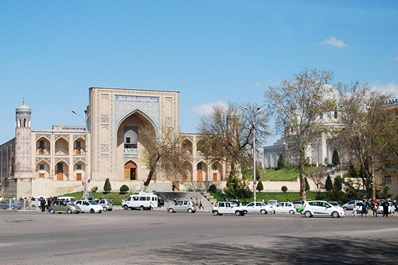 Restoration of the madrassah was based on photographs from the 1880s which showed a large courtyard framed by traditional two-story hujras (cells) that served as living quarters for the students. The living areas connected with classrooms, a mosque and open halls, on one of which is an inscription that reads: "Death is inevitable, but the work done by a person is immortal." The main portal entrance is 20 meters high and was completely restored and decorated with majolica paintings in traditional hues of white, blue and ocher. The madrasah windows are adorned with decorative lattice bars on which the names of Allah and the Prophet Muhammad have been engraved. From the two towers located along the rim of the portal, muezzins invite Muslims to prayer five times a day.

The restored Kukeldash Madrasah once again functions as a religious institute, which today is equipped with classrooms, computer rooms, a special hall for learning calligraphy, a large library, a gym, cafeteria and a dormitory. Each year, more than 100 students are accepted on a competitive basis for a 4-year program. After graduating from the madrasah, the students have the option of being assigned to one of the mosques in Uzbekistan or to continue their studies at a secular university.

Despite serving as an active center of learning, Kukeldash Madrasah in Tashkent remains open to the public. Visitors are welcome to roam its garden, learn its history and legends and admire the traditional-style architecture, which despite having been recently restored still manages to evoke memories of Uzbekistan’s medieval past.