Touristic Places of the Land of Fire

Baku is so rich in attractions that one can easily spend three days walking around the city and might find it not enough to enjoy all beauties of this Caucasian city. It usually takes two more days to see the landmarks in the surroundings of the capital.

Baku is a wonderful city on the shores of the Caspian Sea. Centuries-long history is reflected in its medieval landmarks, where the special place is given to the Old city called Icheri Sheher. On the other hand, it is a fast-growing megapolis with glittering skyscrapers and unusual architectural monuments of the 21st century. Oriental past and hi tech future is entwined in the way that it gives an impression of taking a journey through time.

The biggest attraction of Baku is Primorskiy Bulvar (boulevard) that stretches many kilometers along the shores of the Caspian Sea. It is one of the beloved spots of city dwellers and tourists because of picturesque alleys with trees and fountains, as well as numerous cafes and restaurants. In addition to this, from the Primorskiy Bulvar you can get to the Nagorniy Park where you will get a breathtaking view of the city. 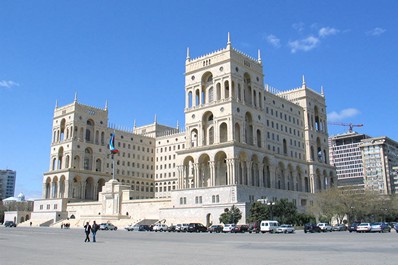 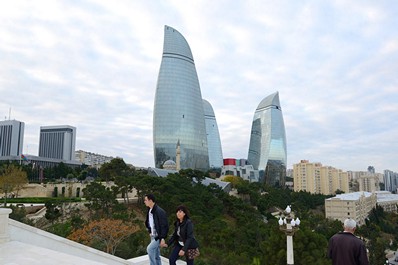 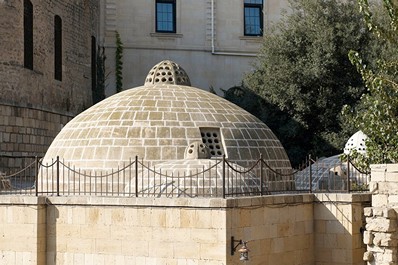 There are different kinds of attractions in the surroundings of Baku as well. The most ancient one is the Gobustan Museum of Petroglyphs not far from another landmark – mud volcanoes. Another interesting touristy spots are fire monuments, flaming hill of Yanardag and temple of fire worshippers Ateshgyah. If you take a chane to travel Baku vicinities, don’t miss a chance to see the historical-ethnographic museum of Gala.

Popular monuments and attractions of Baku

Icheri Sheher is literally translated as the “Inner city”. It is the place where the most of Baku attractions are concentrated. It amazes with classical architectural style palaces, towers, mosques and other old buildings. More

Gates of Murad is the landmark in the fortress of Icheri Sheher erected in the end of the 16th century. The architectural monument is situated in the eastern part of the complex and is the biggest gates of Icheri-Sheher. More

Gyz-Galasi (Maiden Tower) is the main symbol of Baku. The tower is included in the list of the oldest buildings of the city. Initially, it was used as a Zoroastrian temple; later it became the main reinforcement in defense system of the Icheri-Sheher fortress. Scientists are still worried about few secrets of this tower, and there are many legends related to it too. More

Shirvanshah Palace is one of the main landmarks in the historical complex of Icheri Sheher. The building of the palace began in the 12th century and finished in the 15th century, and today it can be called a complex inside the complex, as there are few other attractions of Baku on the territory of Icheri Sheher. More

Juma Mosque is the main mosque in the historical-architectural reserve of Icheri Sheher. Thousand years ago there was a Zoroastrian temple of fire worshippers in its place, but in the 14th century there was built a mosque here that had gone through a complete restoration work in the end of the 19th century. More

Multani Caravanserai is a bright attraction of Baku situated in the Icheri Sheher complex. This building was erected in the 15th century and then served as the shelter for merchants from India. More

Sinik Kala Mosque is a sight of Baku that represents ruins of the temple on the territory of Icheri-Sheher. The central hall and the part of minaret had been preserved and open for tourists. Though it is to remind that according to Muslim canons, entrance is allowed only for men. More

Baku Baths is a separate group of attractions of the Old Baku, the biggest part of which are concentrated on the inner complex of the Icheri Sheher. The biggest and the most beautiful baths are located in palaces; however public baths also deserve separate attention. More

Bukhara Caravanserai is one of the first hotels in Baku. This caravan-sarai was built in the 15th century and was called “Bukharskiy” as there were merchants from Bukhara who stopped there. More

What to see in the surroundings of Baku:

Gala (Qala) is a huge historical-ethnographic museum under open sky. It is situated 40km away from Baku and is a quintessential cultural legacy of the entire Absheron peninsula. There are gathered and restored exhibits and antiquaries related to the medieval life of Azerbaijan. More

Gobustan is a unique landmark only 60 km away from Baku. This is a big reserve where wall inscriptions, everyday life items and even shelter remnants of the primitive people who had lived here 10 thousand years ago, had been discovered here. Today Gobustan is included in the list of the frequently visited attractions in Azerbaijan. More

Ateshgyah is a worldknown temple of eternal fire. It is situated 30km away from the center of Baku, in the outskirts of the Surakhani village. This territory is famous for its unique natural phenomenon such as flaming natural gas seepage, and in ancient times there appeared a Zoroastrian temple of fire worshipers. More

Yanardag is one of the most popular sights in the surroundings of Baku where there have been fire flames blazing from the ground on the hillside for thousands of years. This place is situated 25km to the north of Baku. More

Absheron towers is a set of fortification that was erected in the 11-21th centuries on the Absheron peninsula, around Baku. Then they played the role of the initial defensive line of the city and served as a signaling system. Today, towers and the Absheron fortress are one of the most interesting architectural landmarks in the surroundings of the city. More