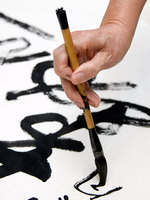 One of the oldest written languages in the world is the Chinese one. It is based on hieroglyphs, each of which has a certain semantic meaning. According to scientists, the Chinese writing language was formed 4,000-5,000 years ago.

In ancient times, the Chinese used tortoise shells and animal bones for writing. These writings were named tszyaguven. Among other well-known material media of the ancient Chinese writing were items of bronzes, as well as bamboo and wooden plates. Later, when the Chinese invented paper they wrote on paper scrolls, and sometimes, on silk fabrics.

The Chinese writing language includes over 60,000 hieroglyphs. Chinese is the first among the languages difficult to study. Today, China has two systems of writing language: the old and modern ones - Wenyan and Baihua, respectively, the latter is characterized by simplification of many characters, and enriching the language with new characters for words such as computer, mobile phone, etc.

Chinese traditional written language is different, because the characters are written from top to bottom, while the columns - from the right to the left. This form of writing is called vertical. However, in the XX century, the Chinese began to use the “European version” of the letter - a horizontal one and from the left to the right.

Calligraphy has its own rules and laws. All the characters are written with the help of horizontal and vertical lines applied at a smooth motion. It would seem that it is easy, but becoming a true master of calligraphy requires hard working for many years.