The Chinese art of music

Music of China - an endless balance of "yin" and "yang" 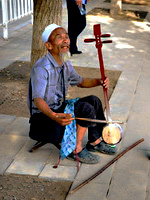 The Chinese art of music has been evolved over thousands of years under influence of various styles of music both a native Chinese one, and that of the China's neighboring regions: Central Asia, India, and Mongolia. In addition, China is home to various nations and nationalities, who also contributed to the development of traditional Chinese music.

Like everything else in China, the music is inextricably tied to the Chinese philosophy. Many schools formed by Buddhist and Taoist monks were developed as part of a religious doctrine. For example, the Confucius’ followers believed that music has played a considerable role in the country’s political life and served to unite the nation and promote its spiritual enrichment. In Taoism music contributed to the merger of the man and the nature, while Buddhists with the help of music comprehended the essence of the universe. Thus, for thousands of years, music has been an integral part of the lives of the Chinese people.

By its nature, the Chinese music is characterized by gentle sounds reminiscent of a gurgling brook, or birdsong. Many medieval Chinese musicians specially imitated the sounds of nature, thus creating a harmony of music and nature. In contrast to European music, Chinese tunes are the melody of one sound with its variations. Within a few hours musicians may play the same sound in different keys and by different instruments, while you will feel like you hear a sterling melody full of several different sounds.

Music of China, like everything else in this wonderful country is built on a balance of “yin” and “yang”, which represent the minor and major sounds - the main components of Chinese traditional music.

One of the most amazing kinds of Chinese music is playing the drums. In ancient times, drumming accompanied military parades and marches. Very often a particular rhythm of the drums used to intimidate enemies. Today, the sound of drums can be heard during traditional Chinese holidays, when the procession of drummers turns into a real theatrical performance.