Public Holidays in Georgia in 2021

Holidays are an essential part of Georgian life and are celebrated with great festivity: Families and friends gather for grand feasts called supra, led by tamada, or toastmasters. Fireworks, parades and lofty speeches accompany secular holidays, while colorful processions and large-scale masses mark religious events. Modern customs mix with ancient rituals preserved by generations of Georgians. Some holidays are celebrated nationwide, while others are regional in scope. Come discover the most significant public holidays in Georgia.

The annual cycle of public holidays in Georgia starts and ends with the New Year, a family festival spent with relatives and close friends. As members of the Orthodox Church, Georgians celebrate Christmas in January and not December, yet they have incorporated some Western traditions into their New Year celebrations. One such example is the Christmas tree, which decorates Georgian homes throughout the season. Read more...

As members of the Orthodox Church, Georgians honor the birth of Jesus according to the Julian calendar. On Christmas Eve, every church holds a holiday liturgy. The most prestigious mass takes place in the Holy Trinity Cathedral in Tbilisi and is led by the head of the Georgian Orthodox Church, the Catholicos-Patriarch. Read more...

A religious holiday celebrated according to the Julian calendar, it commemorates the baptism of Jesus Christ by John the Baptist. The characteristic element of the holiday is the burning of a traditional Christmas tree, or chichilaki, as a symbol of bidding farewell to the previous year’s troubles and sorrows.

The celebration of mothers and their influence in society is one of the more recent public holidays in Georgia, having been established in 1991 at the initiative of the country's first President, Zviad Gamsakhurdia. It promptly gained popularity and has been celebrated ever since. Children and spouses give flowers and small gifts to their mothers and partners, and many concerts, exhibitions and charity events are held for the occasion.

International Women's Day is one of the most popular public holidays in Georgia.

The first Women's Day was organized in 1909 in New York by the Socialist Party of America. After women gained the right to vote in Soviet Russia in 1917, the event was declared a national holiday. In the late 1960s, the holiday was adopted by the Western feminist movement, and the United Nations recognized International Women's Day in 1977. Read more...

Apart from Christmas, Easter is the most important national holiday in Georgia, for it commemorates the essence of the Christian faith - the resurrection of Jesus - and as such, it is celebrated on a large scale nationwide.

A 40-day-long religious fast precludes Holy Week, which culminates in Easter. Throughout the week, the last days of Jesus’ life are remembered, and every functioning church in Georgia holds a special liturgy dedicated to each day of Holy Week. The most important days, known as the Easter Triduum, are Maundy Thursday, Good Friday and Holy Saturday. Read more...

Out of all the national holidays, the Day of National Unity in Georgia is perhaps the most somber, for it commemorates the deaths of 21 civilians killed on April 9, 1989, during a peaceful anti-Soviet demonstration.

The Tbilisi Massacre (also the April 9 tragedy or Tbilisi Tragedy) occurred when Red Army soldiers began to disperse thousands of protestors gathered in front of the Government House on Rustaveli Avenue in Tbilisi. Read more...

Every year on May 9, Georgia pays homage to the 1945 victory of the Soviet Union over Nazi Germany. The surrender document was signed in Berlin late at night on May 8, 1945. Due to the time difference, it was already May 9 in Moscow. Consequently, Victory Day was celebrated throughout the Soviet Union on May 9, and while some countries now observe the holiday on May 8, the original date has held fast in Georgia. Read more...

May 12, Saint Andrew the First-Called Day

Saint Andrew was the brother of Saint Peter and the first Apostle called by Jesus. Traditionally, the Patriarch of Constantinople is his apostolic successor.

The Orthodox Church of Georgia considers Saint Andrew to be the first preacher of Christianity in the territory of Georgia and thus the founder of the Georgian church. His memory and significance are celebrated twice a year, on May 12 and December 13. The first date is a national holiday and is marked with special liturgies held in churches in honor of Saint Andrew.

Independence Day celebrates the anniversary of the 1918 proclamation of independence which established the Democratic Republic of Georgia. 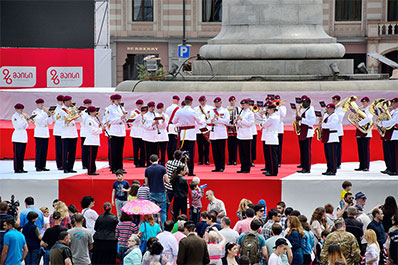 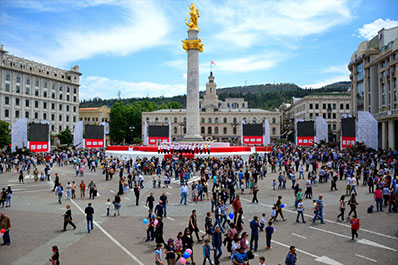 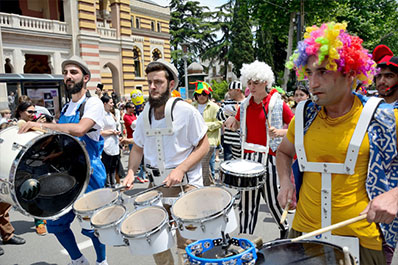 This significant day on the Georgian calendar is celebrated with military parades, cultural and educational events, fireworks and grand speeches. People also use the holiday as an opportunity to promote local products and intellectual ideas. Vendors sell handmade goods, public and private institutions invite visitors to explore their premises, and concerts and exhibitions are held in every sizable city across the country. The whole day is dedicated to celebrating the history and culture of Georgia.

Mariamoba commemorates the dormition (ascension into heaven after death) of Jesus' mother Mary. Churches throughout the country hold special services, which are attended by thousands of Georgians. The biggest one takes place in Tbilisi and is conducted by the Catholicos-Patriarch of All Georgia.

The holiday is preceded by a two-week fast, during which religious Georgians refrain from eating meat (including fish), dairy products and eggs. The fast ends on Mariamoba with large family and community feasts.

Svetitskhoveli or Svetitskhovloba takes place in the town of Mtskheta, one of the oldest cities of Georgia and its former capital. The festival celebrates Svetitskhoveli Cathedral and Mtskheta as a whole.

Legend has it that the cathedral stands on the site chosen by Saint Nino (a woman who preached Christianity in Georgia in the 4th century) for the first Georgian Church. As the original building was destroyed during one of many wars plaguing the region, the current Svetitskhoveli was built in the first half of the 11th century by the architect Arsukidze, who had been commissioned by Melchizedek I, the first Catholicos-Patriarch of All Georgia. Read more...

Giorgoba is a special public holiday in Georgia held in honor of the martyrdom of the patron of Georgia, Saint George.

George, a Greek soldier from Cappadocia and a guard of the Roman emperor Diocletian, was sentenced to death for being a Christian. George is one of the most venerated saints in Christianity and is strongly connected to knighthood, warriors and the military. He is believed to have slain a dragon that demanded human sacrifices and often appears in Christian iconography while fighting against the monster. Read more...