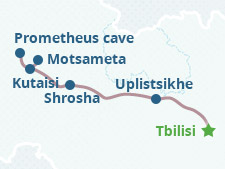 Take two-day tour to the West of Georgia that will introduce you the unique cities of the Western part of the country. You will discover a famous Uplistsikhe, one of the oldest urban settlements in Georgia, remarkable for its diverse structures dating from the Early Iron Age to the Late Middle Ages. Also, you will pay a visit to Ubisa monastery where you can enjoy the architecture and famous mural paintings dated 9th century. In the end of the tour you will visit Prometheus cave, walk in a long tunnel to see a stunning beauty of Georgian underground scenery.
Book two-day tour to the West of Georgia and explore all the diversity of natural and architectural beauty of this land.

Expand All   Collapse All
Day 1: Tbilisi – Uplistsikhe – Ubisa – Shrosha – Kutaisi
After breakfast, drive to Uplistsikhe, cross point of many Great Silk Road routes to begin Tour to the West of Georgia. Explore this cave town dating back to Hellenistic Period and notable for unique combination of various styles of rock-cut cultures and the co-existence of pagan and Christian architecture. Drive to Kutaisi, the central city of Western Georgia once called “Aia”. The road to Kutaisi will take you over Rikoti pass and through the longest tunnel of Georgia (1,722 m), that is also considered to be a border between Western and Eastern parts of Georgia. On the way make a stop to visit Ubisa Monastery, famous for its well-preserved and colorful frescoes dating from the 9th century. Have another stop at the village Shrosha, where you will have a chance to see the versatility of Georgian pottery: “doqi” - jug, “piala” - bowl, “ketsi”- plate and many more, made from clay that is extracted from the soil of the area. Arrive in Kutaisi, take a walking tour around the city’s main sights. Visit Bagrati cathedral (11th century) - one of the best samples of Georgian late medieval architecture towering over Kutaisi and visible from almost any point in the city. Overnight at the hotel.
Day 2: Kutaisi – Gelati – Motsameta – Prometheus – Tbilisi
In the morning visit the Gelati Monastery (12th century), built by King David the Builder. Gelati was the center of spiritual and scientific life of the Middle Ages. Next stop is Motsameta Monastery that stands above the rough Rioni river and is buried in coastal vegetation. Tombs of brothers David and Constantine Mkheidze are located here. Continue to the Prometheus cave, where you will walk a 1.5 km long tunnel and enjoy breathtaking views of stalactites, stalagmites, petrified waterfalls, underground rivers, and lakes along the cave. The underground light system is filled with LED lights of all the colors of the rainbow, marvelously highlighting the natural beauty of the Prometheus cave. Drive back to Tbilisi. Drop off at your hotel/place. End of Tour to the West of Georgia.

More similar tours toTwo-day Tour to the West of Georgia 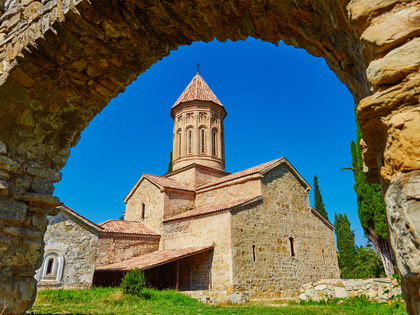 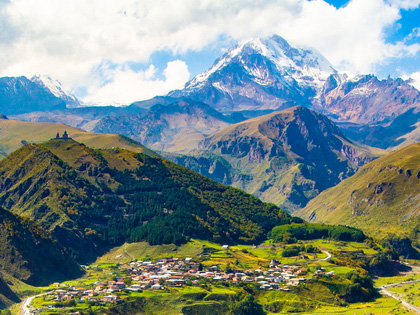 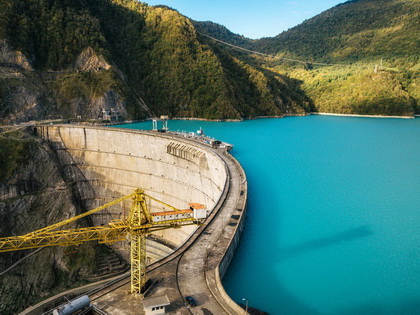 Tour from Batumi to Enguri Dam
1 Day | from US$ 105 / person
Enguri Dam, Zugdidi
All year round 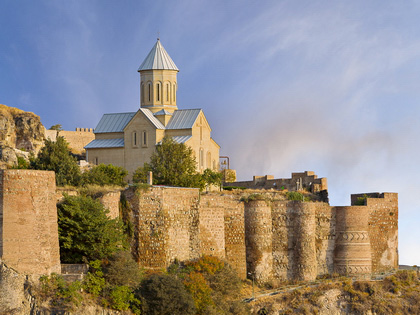