Kyrgyzstan’s nature and environment is one of the main reasons to visit the country. 94% of Kyrgyzstan is covered by mountains, which means that there are ample opportunities for trekking and hiking, or just for relaxing in nature. Visitors can experience a wide variety of environments and locales that are unique to this corner of Central Asia, from wide valleys to high glaciers.

Kyrgyzstan is dominated by the Tian Shan, a large mountain range that divides the country into northern and southern parts. The most densely populated parts of the country are the wide valleys around the mountains, like the Chuy Valley in the north and the Fergana Valley in the south. These areas are home to the largest cities in Kyrgyzstan, Bishkek and Osh, and to most of the farms and agriculture. Even in the city, one is never far from some beautiful viewpoint, be that a mountain, nature preserve, lake, or just a charming road through the country. 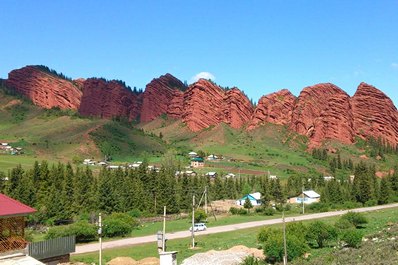 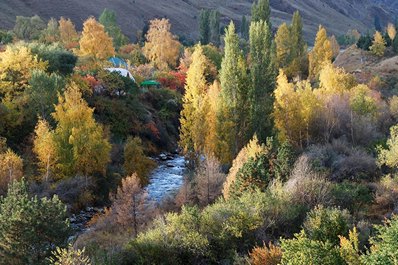 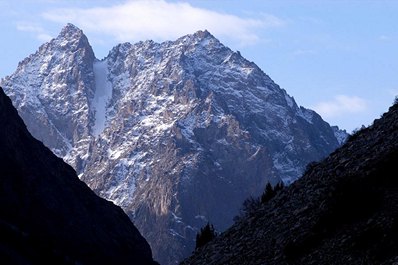 Sometimes referred to as the pearl of Central Asia, Lake Issyk-Kul is the world’s second-largest alpine lake. The north shore is where the largest number of resorts and public beaches are located, while the south shore is famous for its nature and gorges. Karakol, the largest city in Issyk-Kul Province, is the starting point for many treks to some of the most famous glaciers and surrounding mountains. From Karakol, one can visit Jeti Oguz and other striking red sandstone formations.

The Tian Shan themselves are a whole ecosystem: deep gorges with rushing rivers, rocky peaks, small forests, and broad high-altitude pastures. In the summer, these high pastures are dotted with the yurts of semi-nomadic herdsmen, who bring their animals to feed on the rich grasses. Hidden between many of the peaks are lakes, some of which are seasonal, depending on glacial melt. Son Kul is one of the most famous mountain lakes and is a favorite place for many in the nature of Kyrgyzstan, is located roughly 3,000 meters (10,000 feet) above sea level and is only accessible in the summer. Pobeda Peak, located on the border with China, is the highest peak of the Tian Shan, reaching 7,439 meters (24,406 feet) above sea level. Nearby is Khan Tengri, with a peak at just around 7,000 meters (23,000 feet), depending on whether or not you count the glacial cap. 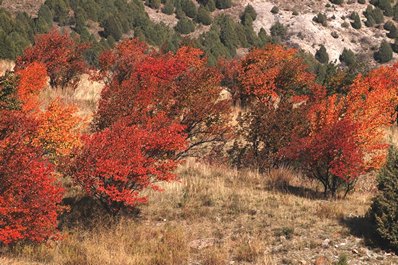 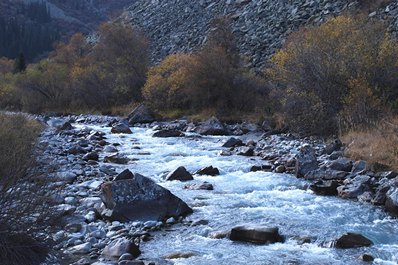 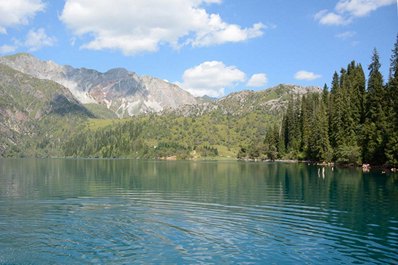 The high mountains are also home to many animals. Birds of prey are relatively common, including eagles, hawks, and falcons. Rarer are Marco Polo sheep, with large, curling horns, and snow leopards, who like to keep hidden and are hard to find. Kyrgyzstan has recently become part of larger efforts to help preserve its unique ecosystems and animals, including hosting conservation efforts like the Global Snow Leopard Forum. The snow leopard can be found in imagery across Central Asia, including in the symbol of Bishkek.

In the southern part of the country, most people live in the flat areas of the Fergana Valley. This flatter area is famous for its fertility, which helps support larger populations and farmers. The Fergana Valley is home to Osh, Kyrgyzstan’s second largest city, and the region is famous for its delicious fruits and vegetables. In the summer, the fields fill with sunflowers, making the villages even more beautiful. Arslanbob, in Jalal-Abad Province, has the world’s largest natural growth walnut forest, which is not only home to a great number of walnut trees, but a great variety.

The far south of Kyrgyzstan’s nature is dominated by the Pamirs, a mountain range that stretches across Tajikistan and China. Right on the border with Tajikistan is Lenin Peak, at 7,134 meters (23,406 feet) above sea level. Lenin Peak is one of the easiest 7,000 meter peaks in the world to climb, which makes it popular among mountaineers.