There are over 88 major mountain ranges in Kyrgyzstan, most of them forming the Tian Shan - the Celestial Mountains. The others, such as the Chon Alai Range in the south of the country, belong to the Pamir Mountains. Kyrgyzstan’s mountains effectively divide the country into a number of distinct regions. The two biggest regions are the northern and southern halves of Kyrgyzstan, united by one main road from Osh to Bishkek. Most of the ranges vary in length from 100 to 300 km (62 to 186 miles). The longest, Kakshaal, is 582 km (361 miles), and the Kyrgyz Range, which is to the south of Bishkek, is 454 km (282 miles) long. Most ranges are between 10 and 40 km (6 and 25 miles) wide. In Soviet times, many of these peaks were off-limits without passes, which were hard to get. Even now, when many restrictions have been eased, some places still require difficult border passes, making them difficult to reach. 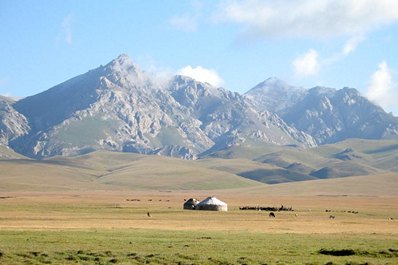 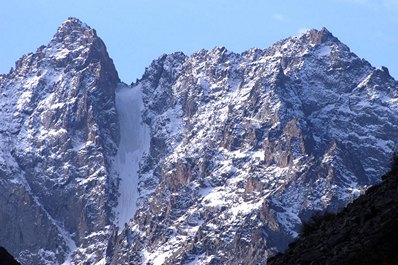 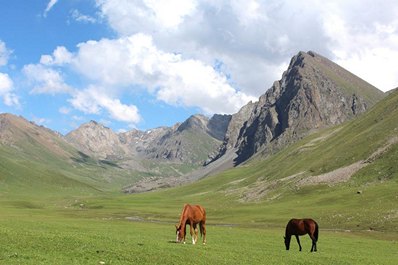 Though some peaks can be technically easy to climb, the weather can present unexpected difficulties. Heavy snowfall can hide crevasses and cause avalanches, both of which can be deadly. Mountaineers who can summit all five of the peaks in the former Soviet Union that are over 7,000 meters (22,965 feet) earn an award called the Snow Leopard. Two of these peaks are in Tajikistan, two are in Kyrgyzstan, and one (Peak Lenin) is on the border between the two. Since the award was started in Soviet times, over 600 climbers have achieved this distinction.

The northern slopes of Kyrgyzstan’s mountains tend to be wooded, since the snow lasts longer without melting. The southern slopes benefit more from the warming effects of the sun’s rays, and so tend to be grasslands and summer pastures (jailoo).

At 2,800 km (1,740 miles) long at 800 km (500 miles) wide at its widest, the Tian Shan is a formidable mountain range, with 40 peaks over 6,000 m (19,685 feet). Though the Tian Shan extends across several countries, the majority lies in Kyrgyzstan. Reaching from the Chaktal Range just east of Tashkent to Urumqi (beyond which it rises again as the Bogdo Ola Range), the Tian Shan is usually divided into Northern, Western, Eastern, Central, and Inner. The range is made of sedimentary, metamorphic, and igneous rocks. 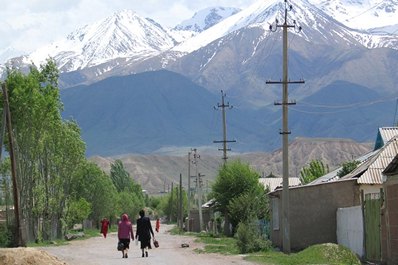 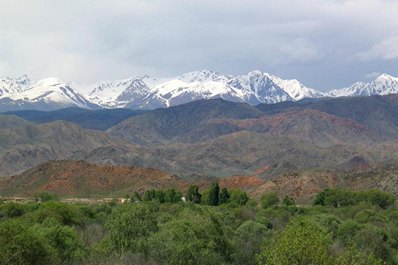 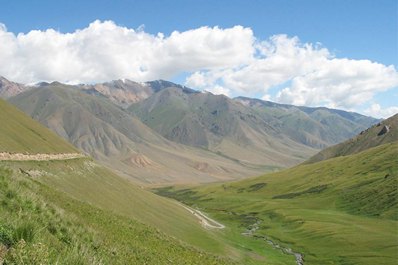 The existence of the Tian Shan (also known as the Celestial Mountains) has been known since ancient times. Despite records and observations from many early travellers, information about the Tian Shan remained “more legend than fact” in the outside world, until the expeditions of Russian geographer and explorer Pyotr Semyonov in the 19th century (for which he was awarded the honorary title Tienshansky by the tsar). In fact, the southern edges of the range were first described by the Buddhist monk Hsuan Tsang in the 7th century BCE, who wrote of “encountering nothing but ice and snow. The snow falls in both in the summer and spring. Night and day the wind rages violently.” The Tian Shan would have also been visible to Marco Polo, who, if his account is to be believed, travelled along this route in 1273 with his father and uncle.

The Terksey Ala-Too Range (the Shady Mountains), run along the southern shore of Lake Issyk-Kul, while the Kungey Ala-Too (the Sunny Mountains) are on the northern shore, and form the border with Kazakhstan. The Kyrgyz Ala-Too Range is located across the northern length of the country, about 40 km (25 miles) south of Bishkek. These ranges are some of the most accessible and scenic locations, places where everyone from the most novice to experienced can have fun.

Only the most northern peaks of the Pamirs are in Kyrgyzstan, right along the border with Kyrgyzstan and Tajikistan. Two of the main ranges, the Pamir-Alay and the Trans-Alay, are within driving distance of Osh. Peak Lenin is the highest point of these ranges, reaching 7,134 m (23,406 feet) above sea level. Though Peak Lenin is one of the easiest peaks over 7,000 m to climb, issues with weather can make it unexpectedly difficult and dangerous.

Most of these mountains in Kyrgyzstan will mean little to anyone except experienced mountaineers, but this is a list of some of the more famous mountains of Kyrgyzstan:

Adygene: In Ala-Archa National Park, rising to 4,393 m (14,412 feet). The slopes are better for trekking than mountaineering.

Jigit: On the southern shore of Lake Issyk-Kul.

Komsomolets: Climbers gather on May 1st every year to climb this peak, and for many it is the first summit they conquer.

Peak of the 19th Party Congress: 5,882 m (19,298 feet), also known as Peak Korzhenevskovo, this peak is not to be confused with Korzhenevskaya Peak in Tajikistan. It is easily visible from the Achik-Tash and Onion Field Camps at the foot of Peak Lenin, and is sometimes used for acclimatization ascents in preparation for Peak Lenin, though there are other more popular alternatives that don’t take as long.

Petrovsky: The actual height of this peak is disputed, and ranges between 4,700 and 4,900 (15,420 and 16,075 feet). Standing over the Achik-Tash base camp, on the north ascent of Peak Lenin, this peak is often used for acclimatization before attempting an ascent on the higher peak.

Pyramid: 5,621 m (18,442 feet), located in the Jeti Oguz Valley, near Karakol on the southern side of Lake Issyk-Kul. This is the largest peak in the section that includes Karakol and Jigit Peaks. The peak rises to 5,215 m (17,110 feet) when the glaciers surrounding it are included. The northern slopes are cut by deep gorges. There are a range of routes mapped out here, from relatively simples hikes to more demanding treks.

Semyonov Tianshansky: This peak is not a simple climb, but there have been many expeditions that have established seven different routes to the summit.