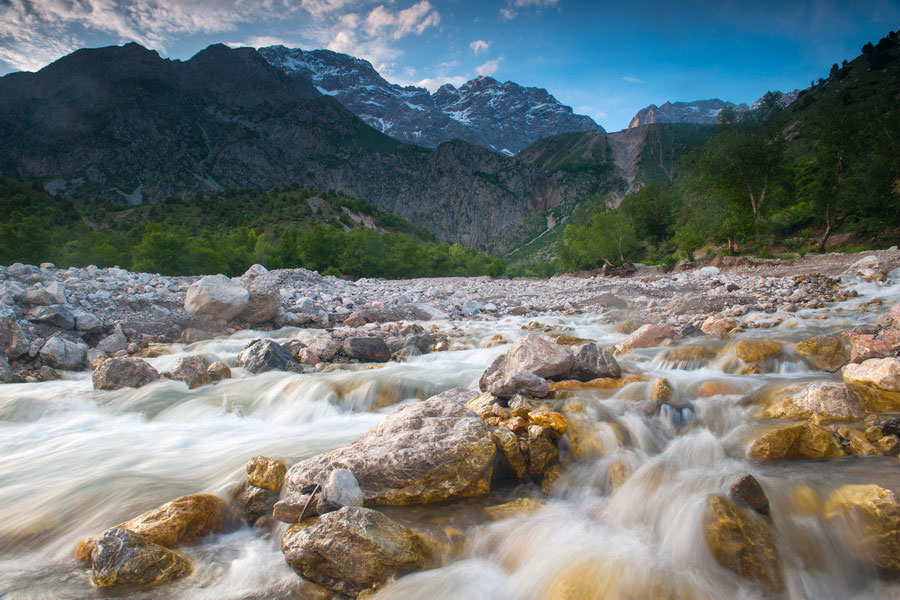 Rivers in Kyrgyzstan stretch across 150,000 km (93,205 miles), made up of more than 40,000 rivers and streams and draining 47 cubic kilometers (11 cubic miles) of water a year. The main source of water for the rivers of Kyrgyzstan is melting water from the numerous glaciers and snowfields in the mountains, while rainfall contributes less than one fifth of the water volume. Since Kyrgyzstan is located so far from oceans, all of its rivers flow into closed drainage systems which do not drain to oceans.

Most of the mountain streams are not really navigable due to the extreme drops in altitude, the complicated relief of the riverbeds, and the velocity of the river flow. Many, however, are suitable for white water rafting and similar activities.

The Naryn River is the longest of Kyrgyzstan’s rivers, at 807 km (501 miles) long. The Big and Little Naryn Rivers meet just above the town of Naryn. From there, the river collects water from tributaries, such as the At Bashi and Kekemeren, until it flows into the Toktogul Reservoir, from which it crosses the Fergana Valley into Uzbekistan and joins the Syr Darya all the way to the Aral Sea.

The Talas River is also a major river, but it is more well known as a historical site. It was here that the Chinese suffered a defeat at the hands of the Arab Abbasid Caliphate in 751, which marked the westernmost border of Chinese expansion. The battle also marked the end of Chinese and Buddhist dominance in Central Asia, and the beginning of the spread of Islam through the region. Also, the secrets of papermaking and silk manufacturing were brought outside of China for the first time by Chinese prisoners of war in Samarkand, held after the Battle of Talas.

The Chu River flows from the Naryn Region, around the eastern edge of the Kyrgyz Range, through the Boom Gorge, past Bishkek and into the deserts of Kazakhstan. It was once thought that the river flows out of Issyk-Kul, but it actually flows by the mountains and misses the lake by several kilometers (though water from the lake may feed the river through deep underground passages). The valley around Bishkek is intensively irrigated by the Chu River, as well as other rivers flowing through the region.

The Sary Jaz River forms on the slopes of Khan Tengri, in the eastern part of Issyk-Kul Region, from which it flows into China (where it is known as the Aksu River).

The Chatkal River is located in the western Tian Shan, where it flows through a remote valley and into Uzbekistan. It is flanked by a 120 km (75 mile) mountain range of the same name, and by the Chandalash Range.

The Naryn River flows across Kyrgyzstan and Uzbekistan, covering 807 km (501 miles), and 59,000 square km (22,780 sq miles) of watershed. The river starts from glaciers in the Central Tian Shan, and becomes the Naryn River with the confluence of the Big and Little Naryn Rivers.

The Naryn River flows past narrow gorges and plains, starting in the Naryn State National Park, and crossing the cities of Naryn, Tash-Kumyr, and Uchkurgan. Running alongside this part of the river are the Naryn Too Mountains, which stretch across 130 km (80 miles), and reach a maximum height of 4,530 m (14,862 feet). The river is used extensively for irrigation, with several canals flowing out of the river. There are also several major power stations along the river, including Kyrgyzstan’s largest reservoir, the Toktogul Reservoir.

Past Toktogul, the Naryn River flows through Jalal-Abad and into Uzbekistan, where it joins the the Kara Darya River to form the Syr Darya, from where it flows to the Aral Sea. Because so much water in Uzbekistan originates from rivers in Kyrgyzstan, and because irrigation is so essential to agriculture in Uzbekistan, water rights and the flow of the Naryn River can be a source of friction between the two countries.